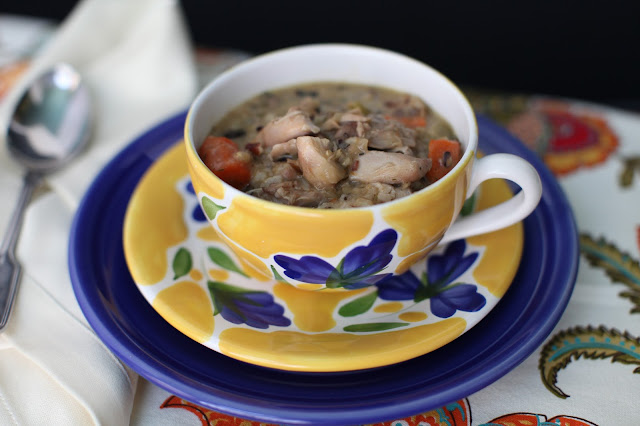 Although I haven't written previously about the Instant Pot®, I have fallen for the time-saving kitchen appliance just like every food blogger on the planet, or so it seems. I must admit though, I was slow to the pressure cooking party. And I would probably still be resisting the appliance if it wasn't for my sister, Linda. My steadfast mantra pre-Instant Pot® was that I didn't need one more appliance in my kitchen. I was wrong.
Last fall during the small window of time that Linda felt well enough to start cooking again—one of her life-long passions—she volunteered to start making dinner during the work week. Although Linda was experiencing an upswing health-wise, she didn't have a lot of stamina. Linda wanted to cook and be productive but she didn't want to spend an inordinate amount of time getting dinner on the table.
After reading many favorable reviews about the Instant Pot®, Linda ordered the 7-in-1 6-quart model and began using it on a regular basis. I was able to witness the ease of which she was able to quickly produce pot roasts, soups, beans and chili, poached chicken, shredded meats and even breakfast items such as steel cut oats. Although the Instant Pot® is a multi-use appliance, we have primarily used the pressure cooker function. Because it is an electric pressure cooker, it doesn't need monitoring while the food is cooking so it is as simple as pressing the settings and walking away, freeing up time to pursue other activities.

After two years of living in a college dorm, in August my daughter Maddie and two friends moved into their first apartment that is conveniently located near the university. The bad news for most young people is that an unfurnished apartment requires furniture, kitchen equipment and a stocked pantry, if one wants to cook, which after two years of enduring dorm food is exactly what the ladies wanted to do. Unlike most college kids, Maddie moved in to her first apartment with a fully loaded truck as if she was thirty years old.
My family, we are the keepers of things. I hesitate to use the word hoarders. We do like to have the right tool for the right job, as our father taught us. Interesting knickknacks decorate every nook and cranny. We appreciate clothes; our closets runneth over. We cook, we bake, we barbecue. We adore thrifting and entertaining. Although let's be honest, we liked entertaining more in years past than we do now. We are artists, which requires a stock of art supplies. We craft together, making things like sugar skulls and paper flowers. As sisters we have passed on our handy ways, our decorating styles, cooking skills and our love of velvet to our children... well, at least to our daughters. To be fair, the sons are handy and like to cook (if they like velvet, they keep it to themselves).
As we were working outdoors in August to get Maddie packed up, I remarked to my husband that I couldn't believe Maddie had enough "stuff" to fill-up a 15-foot truck from floor to ceiling. Without missing a beat my husband made an antagonistic crack about how I was successfully completing my mission to burden the next generation, that these belongings would act like an anchor tied around Maddie's waist. Noting my sour expression, he quickly turned his mouth from a frown into a smile as if an insincere facial expression would counteract the instant flare-up of ire that I was urgently trying to tamper inside myself before it boiled over into a rancorous retort. Our inside joke is that you can pretty much say anything to anyone as long as you have a smile on your face. A delayed smile is a smile given too late. Mount St. Michelle was on the verge of erupting.

The conversation could have quickly escalated in to a full blown argument, but it didn't. Largely because I did not take the bait. My numerous years of circling the sun on this planet have taught me many valuable lessons, such as... moving sucks! On top of the moving drudgery, we were both feeling the wearing effects of the intense heat and humidity of a scorching summer day in the Sonoran desert. The afternoon high would reach a steamy 103 degrees. Crabbiness will naturally escalate in triple digit heat. It was simply too hot to put our withering energy into an argument, especially while in our front yard in earshot of our daughter and neighbors. We're not that kind of couple... yet.
Although I didn't appreciate my husband's snarky comment, I couldn't necessarily in good conscience disagree with him either (much as I wanted to). I love the saying, "Keep it light enough to travel." Yet I've never managed to take the advice for myself, even when I've attempted to put it into action. My personal failure doesn't stop me from making the recommendation to others because it is still good advice. Much to her dad's chagrin, Maddie seems to be highly satisfied with her collection of possessions, a mix of new purchases as well as familial hand-me-downs and inherited items from Linda, including furniture, housewares, decorative items, kitchen equipment, and that magician of an appliance, the Instant Pot®.

I have mentally taken note over the past few months that Maddie uses the Instant Pot® frequently. After cooking on a gas stove all these many years at my house, Maddie is totally bummed over having an electric stove. The apartment's stove does seem pretty lame. So much so that when I called Maddie the other night she was using the Instant Pot®'s sauté function to fry Boneless and Breaded Chicken Breasts instead of using a skillet on the stove. She said that not only does the stove take a long time to heat up, but it also doesn't get very hot. I recommended that she submit a maintenance ticket, which is, after all, the beauty of renting.
After eating chicken upon chicken in myriads of ways for weeks on end on her limited budget, Maddie was more than ready to cook something different, so I recommended Nom Nom Paleo's Instant Pot Kalua Pig. Maddie was thrilled to cook up a big batch of the porky goodness and marveled at how easy it was to prepare (and inexpensive). While the pork was cooking unattended, Maddie did never-ending homework.
Maddie froze leftover portions of the shredded pork in several ziplock packages for future meals. A packet can be quickly defrosted in the refrigerator overnight, or popped in cold water to defrost in about an hour, or slipped directly from the freezer into marina sauce to reheat slowly for a rustic ragu to ladle over cooked pasta. One base recipe of Kalua Pig can be taken in multiple directions, including  Mexican, Italian, Hawaiian and Southern barbecue.
I have used the Instant Pot® so much over the past year that I decided to upgrade to the larger model, the 7-in-1 8-quart/1200W.  I'm glad I did. The extra capacity of two quarts makes it easier to cook larger cuts of meat, especially a whole chicken. Maddie and I love our Instant Pot®'s so much that they have earned permanent homes on the limited real estate of our kitchen counters. 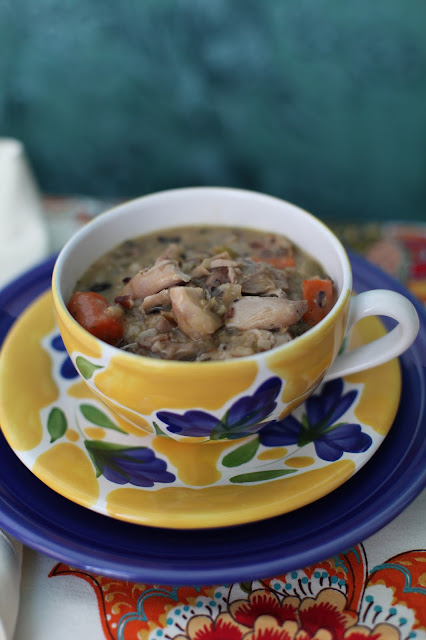 Instant Pot® Wild Rice Chicken Stew
This recipe is easy, inexpensive and tasty without a whole lot of prep or fuss. The recipe is adapted from the blog Super Healthy Kids. Please note that this recipe will serve 12-14 people. You can easily halve the recipe for a smaller group. I prepare the recipe as written and freeze leftovers so that I am assured of an easy meal at some point in the future. My mom appreciates taking a couple of portions home with her to reheat for lunches. Just add a little water or chicken broth to the saucepan for reheating as the stew tends to thicken under refrigeration.
If you are feeling so inclined, homemade bread is a wonderful accompaniment for this hearty dish. Our French Bread and Filled Baguettes are fun to make and freeze beautifully, too. Alternatively, for a quicker option, Linda's Orange Wheat and Nut Quick Bread is really delicious. And, of course, it's difficult to beat flaky homemade buttermilk biscuits.

Procedure:
1. Push "sauté" button on Instant Pot®. When the pot read "HOT", add oil and pancetta. Sauté for 2 to 3 minutes. Add onions, chile flakes, salt and black pepper and cook for about 3 minutes. Add minced garlic and Italian seasoning and cook for 1 to 2 minutes until fragrant. Press "Cancel" to turn the sauté setting off.
2. Add broth, sherry and wild rice mix to Instant Pot® and stir. Add the prepped carrots, celery and mushrooms.
3. Place the chicken on top in a tight layer. Cover the chicken with the cream of mushroom soup, spreading evenly with a knife. Drizzle with Worcestershire sauce.
4. Seal the Instant Pot®, close the vent, and press "Manual." Use the "pressure" button to toggle to high pressure, then set the time for 27 minutes. After 10 seconds the Instant Pot® should register that it has begun the pressurizing process.
5. Once the pot is done cooking, press "Cancel". You can do a slow or fast release. For slow, let the pressure cooker sit for 15-20 minutes to naturally release pressure. Alternatively, for a quick release, with an oven mitt covered hand, open the vent by pushing the vent towards you. If you have a low ceiling, it is best to do a quick release under the hood of your stove with the vent turned on. The pot will energetically spew steam for about 2 minutes. Once the pin drops, the pot is depressurized.
6. To quickly prep the herbs, place all the destemmed herbs together in a pile on a cutting board and chop with a chef's knife until minced.
7. Remove the lid. Gently, so that you do not shred the chicken, stir in the prepared herbs and fresh lemon juice. Serve immediately, or press warm on the Instant Pot® and the stew will keep nicely until serving time. Garnish individual servings with grated Parmesan, if desired. Serves 12-14.

Posted by Salvation Sisters at 5:15 PM