A Southwest Tradition: Tamales for Christmas 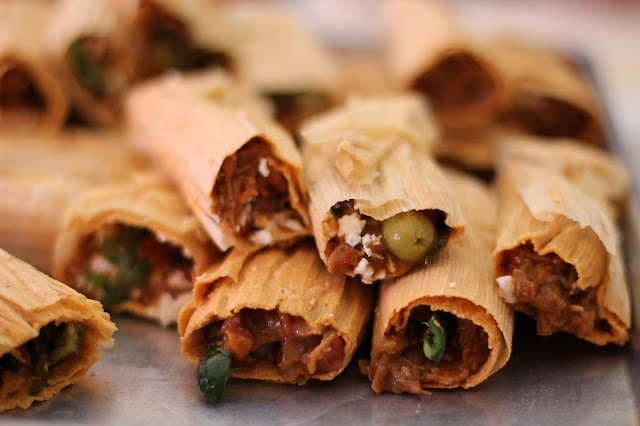 About this time every year I go into full holiday planning mode. I'm usually on the hook to host multiple family dinners at my home between Winter Solstice through New Year's Eve. In recent years—after a string of increasingly stressful holiday dinners, an unjoyful attitude (just call me #grinchy) and trying to overcome nightly aching, throbbing feet—I decided to simplify my life as much as possible by creating menus where a key part of each meal can be made ahead and frozen.
Not to be too cliché, but I do fall into planning menus that are influenced by countries that I have visited and whose cuisines I enjoy the most, such as France, Italy and Mexico. Go ahead, I dare you: try advising my family that (surprise!) we're having Scandinavian or Moroccan for Christmas dinner this year and see the range of "ew" faces develop like Polaroid pictures in front of your eyes. Just like a Thanksgiving meal, a Christmas Eve or Christmas dinner is no time to break new culinary ground. Save that for the doldrums of January.
A couple of years ago after finally reading Julia Child's first groundbreaking cookbook, Mastering the Art of French Cooking, I opted to prepare a triple recipe of crowd pleasing Beef Bourguignon in November. I let the hearty stew with the fancy name sit in the refrigerator to rest for 24 hours. Then, the next day, I divided the big batch of goodness into portions that would serve about 6 people. Into the freezer went the portioned packages, and I gratefully checked one more item off my to-do list.
I collect a final headcount for each holiday dinner about a week in advance. Two days before the special dinner, I transfer the number of frozen packages to the refrigerator to defrost. All that I need to do to finish dinner is to whip up some mashed potatoes, make a friendly veg (#nobrusselsprouts), gently reheat the Beef Bourguignon and open a couple of bottles of wine. I produce a rustic, but elegant dinner with hardly any fuss on the day of the gathering.

The same strategy applies to Pasta Bolognese, which only needs to be paired with shaved parmesan (Parmigiano-Reggiano, if you're feeling extravagant) and an excellent salad of leafy greens. If you want to make just about everyone extra happy, broil a loaf or two of crusty garlic bread and serve hot from the oven. If anyone is Paleo in your group, it's really easy to serve the Bolognese over zoodles or spaghetti squash. For more traditional eaters, the Bolognese sauce also pairs well with regular or gluten-free pasta. My go to brand for gluten-free pasta, which is available in a variety of shapes, is Bionatureæ®.
My other most requested holiday menu hails from south of the Arizona border: Carnitas and an assortment of Tamales from Mexico. To round out the menu, I prepare homemade pinto beans and Mexican Rice. Garnishes include Guacamole, Mexican Crème Fraîche, shredded cheese, shredded lettuce and diced tomatoes. Normally I make the carnitas ahead (and freeze), and buy the tamales from a local purveyor. But last year my sister Juliette proposed that we gather a group of family and friends to make the tamales together down in her home turf of Bisbee. If you aren't familiar with the tiny historical town of Bisbee, you can read all about it's eccentricities here and here.


We had so much fun making the tamales last year that we are going to do it all over again this year. Our group talked and laughed and got caught up with each other while assembling tamale after tamale. We listened to music and sipped a variety of beverages. The team made a ton of tamales over the course of an afternoon. For contributing their labor, everyone took tamales home with them to eat that night or freeze for a future, very delicious, make-ahead meal.
The really great thing about preparing your own tamales is that you have control over the ingredients and you are only limited by your imagination. You can successfully make vegetarian tamales by simply swapping the lard for corn oil or your oil of choice. I personally prefer lard. I have found good sources for lard at my local farmers' markets. We weren't planning on breaking any new ground flavor-wise, it is the holidays after all, so we prepared three fillings: shredded pork, shredded turkey, and vegetable with black beans.

An unlikely discovery that we have made over the years is that the meat inside a tamale tastes very similar regardless of whether it is filled with pork, turkey and beef. Strange, I know, but true. So when choosing a filling, it really comes down to your eating preferences. You don't need to make multiple fillings unless you feel compelled to. Even then, it can be difficult to tell which tamale your selecting from the steamer pot unless the tamales are marked in some way, such as a different wrapping style, or tying with different colored strings to indicate the various flavors.

Traditional tamales will often have one green olive tucked in the filling. Eating these tamales can be kind of dicey, a variation of Russian roulette, because often the green olive will contain a seed. We really appreciate green olives so we tend to add three to the filling, but we use pitted green olives to avoid the risk of losing a tooth while trying to enjoy a holiday dinner in a darkened dining room lit by candles. We're never quite sure what's in any particular bite. Not naming names, but one sister would lament if there was only one green olive in her tamale while another sister, who also randomly selected a tamale from the steamer pot, would gloat that she chose a tamale that had three green olives. My husband thinks we're ridiculous for creating such a stir over green olives, but he should know by now it is what we do.
An additional discovery is that adding a thick strip of smoked mozzarella to each tamale was a huge hit. Everyone dug it, the young and old alike. Finally, everyone agreed that adding strips of potato and jalapeño to each tamale was also the way to go. At least we can all agree on something. (And here I have to remark that once again this year for Thanksgiving my family had to stubbornly debate whether to stuff or not stuff the turkey. I chose against stuffing the turkey this year and it almost started a riot before dinner time between we three sisters and our mother.)
Place tamales, grouped by filling, into freezer safe Ziplock bags. Freeze the tamales. The tamales can be steamed directly from the frozen state. Easy! Be forewarned that frozen tamales take about two hours to cook, so plan appropriately. Be careful that the simmering water does not completely boil off or your pan will be scorched. Continue to add water to the steamer to maintain the water level, if needed.

By the way, if you find that you've steamed a couple of extra tamales and you have leftovers, we have found that tamales are great in scrambled eggs. Simply dice a tamale into bite size pieces. Pan fry the pieces in a bit of butter for a few minutes, then add scrambled eggs along with some salt and pepper. Add some shredded cheese if you like. Serve with salsa.

Read more »
Posted by Salvation Sisters at 4:35 PM No comments: