﻿My Traveling Tales by Michelle﻿

Dearest Sisters,
I’m in my hotel room, sitting on the couch, laptop in my lap, Starbucks coffee on the right. The faux fireplace, activated by a light switch, is sending wisps of fire up through what looks like, but are in fact not, hot coals that are eerily silent. If an enterprising company can create the illusion of fire, cannot they also co-create a complementary soundtrack to match?
Niagara Falls, or the American Falls to be accurate, is directly in front and ten floors below me. Horseshoe Falls is down a little further on the right. Mist rises from its basin like a ghoulish apparition. The window is open letting the roar of the cascade reach my ears as well as the sounds of a city - cars and buses shifting and braking and voices speaking in foreign languages. What gives the sensation of being at the ocean, beyond the crashing water, is the cawing seagulls that tirelessly swoop over the water. ﻿
On the walking path below, miniature figures pause to snap photos and then walk on. Lovers stroll walking arm in arm. Teenagers (many of the girls have pink streaks in their hair) shriek like the birds above, playing 2-foot games of tag with the boys, friendly arm punching thrown in to show that they care. Nothing shows teenage affection like a good swat on the arm.
You know that you are standing before one of the seven natural wonders of the world, when after five minutes of viewing, one’s mind wanders to the inevitable question of “what’s next?” Lunch? Dinner? Room service and an on-demand movie? ﻿
The city planners, a crafty bunch of successive leaders, master planned “fun and excitement” on every corner, a carnival of attractions and restaurants designed to part you from your hard earned money. The problem is that these attractions are not Michelle approved. When confronted with dinner options, I eschewed the likes of Planet Hollywood, Hard Rock Café, Margaritaville (my apologies, Jimmy) and the Rain Forest Café. And, with regards to entertainment, I was not up for touring the Wax Museum or Ripley’s Believe It or Not, but when am I ever gung ho for those touristy attractions? ﻿

Instead, predictable me rode the elevator to the 12th floor of my hotel to enjoy dinner-for-one at the Fallsview Restaurant. Without a reservation, I was able to snag a small table with a view of the American Falls. A large column hid the Horseshoe Falls from my line of site, but I was not disappointed.
Heading my waiter’s advice, I ordered the vine ripened tomato salad with baby greens, buffalo mozzarella and agro dolce dressing (made with balsamic vinegar and maple syrup) followed by rack of lamb cooked medium-rare accompanied with mashed potatoes and baby vegetables washed down with a lovely merlot. All that was missing was a touch of mint to go with the lamb. Since mint jam is out of fashion, a little mint pesto would have been a welcome addition to the rather conservative meal.﻿
Unfortunately, whoever was responsible for designing the restaurant did not take full advantage of the view, which is a shame. If only the designers had visited Horizons Restaurant in Sausalito. Its terraced layout gives nearly every booth and table a spectacular view of San Francisco. Funny the things one considers while dining alone – contemplating a restaurant design in Sausalito while dining in Niagara Falls.
I felt too guilty pulling out my paperback book for the wait between courses – I mean – how often will I have the opportunity to dine looking at a ginormous waterfall? Fortunately, my indispensible iPhone came to the rescue. Through the miracle of technology, I had a lovely text conversation with my daughter between courses and bites, learning about each other’s day, as we do every night over dinner.
﻿
The family three tables over were dining with four boys that looked like they were all under the age of ten. The little darlings kept calling each other dirt bag and bonehead. It was funny until it became annoying. Being myself a breeder, I kept a soft spot in my heart for their Mom and Dad. Thankfully they finished desert and were gone before I took my last bite of salad. It was almost time for the little beasts to be put to bed with a spanking hug and a kiss.
Did I mention that my bathroom has a flat screen TV? How cool is that? All the better to get those black mail photos of famous guests. Just kidding… kind of. I suppose it depends upon your disposition on conspiracy theories. I am certain that my friend Gary would be draping a towel over the screen, but I am rest assured that no one wants a photo of me in my birthday suit. ﻿

Between the falls view, the fireplace, two TVs and room service, there is really no reason to leave my room. Except that Starbucks is located in the lobby. Oh yeah, and that pesky convention I need to work later today and all day tomorrow. The reason I get to enjoy this trip in the first place!
I didn’t mention that I almost missed my flight. I learned late last night that Southwest Airlines cancelled 70 or so flights because one of their Boeing 737s blew a hole in the roof. All I knew, when I showed up at the airport at 6:00 a.m. is that there was a line of passengers all the way out the terminal door and lining up along the curb.
One hour later, I was talking with the ticketing agent, right as my flight was due to take off. I belly upped to the counter anticipating bad news. But surprises of surprises, my plane was still there. The plane was being held for 10 minutes and no longer. The agent’s advice was simple, as if we were playing Monopoly. Do not grab a sandwich. Do not buy a magazine. Do not go to the bathroom. Proceed directly to the gate after security. Crap! Security! I ran, as the crowd cheered me on. No kidding. After an hour, you get to know the people around you.﻿

﻿ Clearing security in a timely manner is always a game of roulette. No telling how long that will take. I begged my way ahead of a family and mercifully cleared security in nine minutes. I literally grabbed by laptop out of the plastic bin, jammed my feet into my Dansco clogs, slung my mammoth purse over my shoulder,  heaved my heavy computer bag (no time for casually rolling it behind me) and ran as if I was being chased.
I sprinted up to the gate in the nick of time, panting, handing my "A1" boarding pass to the agent. Yes, A1 position equals first in line. First time I’ve ever had an A1 boarding pass (the gate agent laughed heartily with me) and I’m the last one to board the plane. Well, almost, two minutes later a beleaguered family crossed the threshold. The reseating game started when the stewardess asked if a row of people would move so that the family could sit together. Nobody flinched, raised a hand, offered a word. The plane was quiet as a bone yard. Apparently everyone was quite happy where they were seated and were not in obliging moods.
I was planted in the middle seat of an exit row. No one under 15 can sit in those seats, so we weren’t moving even if we volunteered. After what seemed like an eternity, the flight attendant extended an offer for free drink booze coupons (at 7:15 a.m. mind you) and three passengers finally decided to play nice. With redistributed cheeks in seats, the plane got on its way. We made it to Buffalo on time. Gotta love Southwest Airlines, they’ll nearly always get you to your destination on time.﻿﻿﻿

I had a tight connection, so once again I found myself charging like a bull in Pamplona, through Chicago Midway to the next terminal. I had exactly five minutes to spare, which I devoted to filling my hungry stomach foreseeing that a tiny bag of peanuts or pretzels on the plane would not hold my appetite over until dinner.
I dashed to the nearest quick service restaurant. After speed reading the menu and one snap decision later, I stood at a high-top table devouring a Chicago Style Hot Dog as if I were participating in (and winning) an eating contest. Sexy at any age. I tried to slow down and purposefully chew every bite to avoid reading a headline about myself in the newspaper the next day written by a witty copywriter: “Middle Aged Female Chokes on Jumbo Hot Dog in Chicago Airport.” With that thought, I better bring this note to a close!
Bran muffin and extra hot grande non-fat vanilla latte kisses,
Michelle 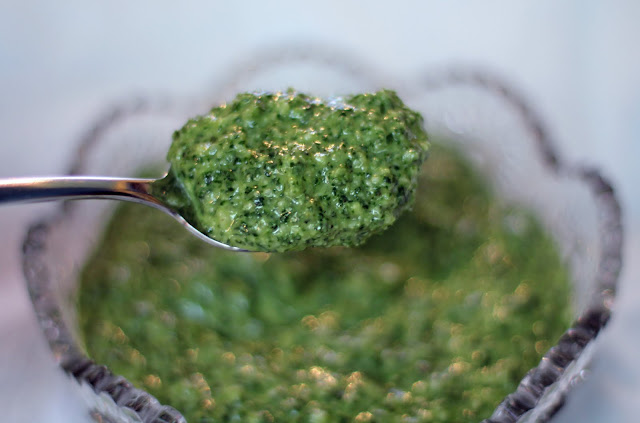 Are you the type of person if you see a subpar movie, you immediately want to see another, better movie to replace the bad experience? I am. I'm also that way with food. Once mint pesto entered my mind, I had to come home and make some.
I tried to locate my trusty mint pesto recipe to no avail. I made it quite often while living in San Jose. It was a Martha Stewart recipe to accompany rack of lamb. I couldn't find it on her website. I'm sure the clipping will turn up one of these days but until then I had to recreate the wheel. Hells bells.
I looked at recipes that cut the mint with parsley or with basil, or with parsley and basil. For the nuts: sliced and toasted almonds, pistachios or walnuts. All recipes had fresh lemon juice, olive oil, some garlic (1-3 cloves), parmesan, salt and pepper. Some recipes included a little feta cheese or ricotta to add creaminess.
A rebel cook included a jalapeno, which led me to think about Mint Chutney recipes which also vary, but are essentially similar: 3 parts mint leaves to one part cilantro, garlic, green chilies, pistachios, mango powder, lemon juice, salt and thinned with perhaps a little water or a little yogurt.
This is what I did. What would you choose? Next time, I might just go with all mint because the parsley made the pesto much more mild than I had anticipated (which would be great with shrimp.) For lamb, I would recommend using all mint.

2. Transfer to jar with lid and cover until ready to use, or refrigerate for up to a week, applying plastic wrap or a thin film of olive oil directly on the surface. If you plan on freezing the pesto, mix-in the grated cheese after the sauce is defrosted. Yield: About 1 cup 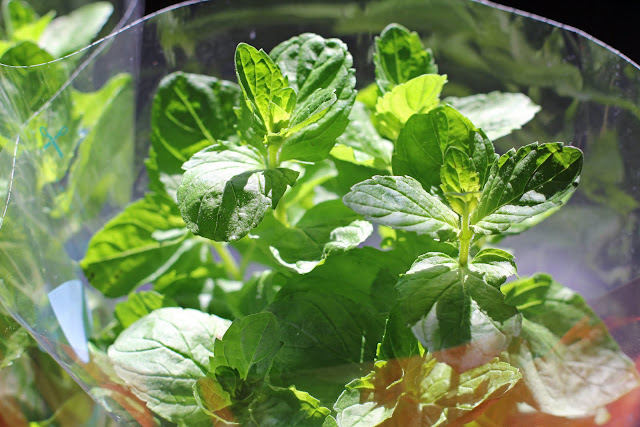