"If a story is not about the hearer, he [or she] will not listen... A great and lasting story is about everyone or it will not last. The strange and foreign is not interesting—only the deeply personal and familiar."  — John Steinbeck, East of Eden

This time of year always prompts me to think of one of my favorite childhood memories of summer. Among those memories are the backyard barbecues that were hosted by my paternal grandparents, Elsie and Charlie—they were legend. In the photo above, it appears that Grandma Elsie is grilling chickens on a rotisserie under a large sycamore tree in the backyard, and as a matter of pride for me, our grandma was the 'griller' in the household at a time when it was usually the man of the house who commanded the grill. I consider her early example the reason that I have always had an interest in grilling, and have become adept at it, because I never thought anything was strange about it.

One of my favorite things that Grandma Elsie always made for these occasions was her famous baked bean dish that was made rich with pieces of salt pork and then intensely flavored by being cooked all day with molasses, brown sugar and other spices. Grandma's beans would bake all day in the oven in their small kitchen on Bryant Street in Yucaipa, California, and then just before dinner time, she would bring the heavy Dutch oven outside and set it on the top of the grill in the photo above, where the caramelized mass of legumes would stay piping hot until dinner was served.

This post is a perfect example of what our blog is about at the core. When I sat down to write about my dad's mother, although I have vivid memories of her, I came up short with solid details about where she was born, or how she and Grandpa Charlie met, and so on. I wrote to my dad for the answers, so that our family will have the details when they come looking for information. Hopefully those of you who follow we Salvation Sisters will find Elsie's story interesting, too, since all of you, no doubt, have similar stories in each of your own families. Here are the details of our grandma's birth, and her fateful chance encounter with our Grandpa Charlie, the dashing "older man" according to our father, Paul:


"Elsie was born on December 8, 1907 in Los Angeles. The way my mom and dad met is an interesting story. Dad had an automotive electrical repair shop in Long Beach in the 1922—1924 time period. His only employee was Robert Ballenger, whom you all knew as Uncle Bob. He was to become the husband of my mom’s sister, Florence. Anyway, in the early 1920s, the Signal Hill oil boom was in full swing. Signal Hill was not all that far from my dad's business. One day, there was an oil fire on Signal Hill, and Bob wanted to make a cheap date out of going to the location to watch the fire-fighting effort. Bob wanted Charlie to go, too, but Charlie would have been the odd man out as Florence was going with Bob. So, my Aunt Florence had a solution—she would bring her kid sister, Elsie, along so Charlie would have a date, too. Elsie couldn’t have been more than 15 or 16 at the time, and my dad would have been seven years older—a mature 22 or 23.  Of course, we now know that Charlie and Elsie really hit it off, but they had to wait until Elsie turned 18 to get married. They were married on the second day following her 18th birthday in December of 1925." 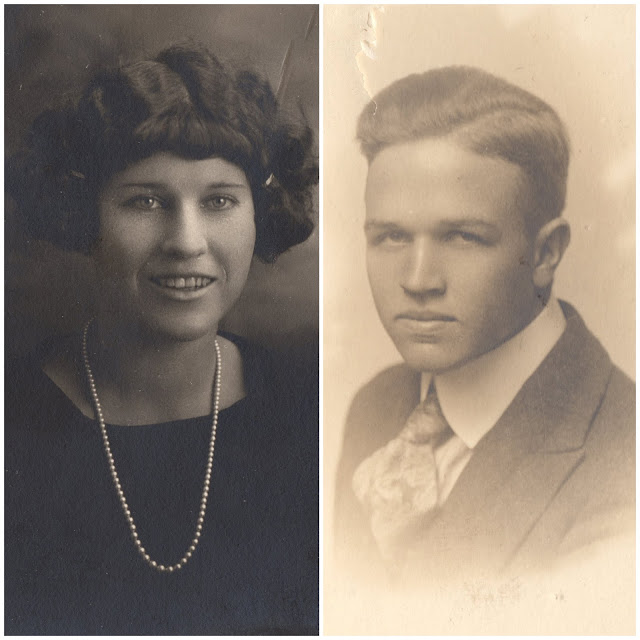 So I just discovered that if it hadn't been for the chance meeting of Elsie and Charlie on a blind date ninety-something years ago, we Salvation Sisters would never have been born. My grandparents were married for nearly sixty years, and were the parents of three boys (two of whom survived into adulthood), grandparents of nine and there are 19 great-grandchildren.

As a point of interest, our Grandma Elsie's father has become well-known posthumously, as a builder of vintage Craftsman Bungalows in the Long Beach area. His name was Miner Smith, and he even has a Facebook page dedicated to him and his beautifully-built houses that have interesting architectural and masonry details. They are highly prized by their current owners. Find out more about our great-grandfather and see photos of the houses he built in Long Beach, California by clicking here. Thanks to fellow blogger, Steffie Hands of Bungalow Girl for the interesting article and photo. 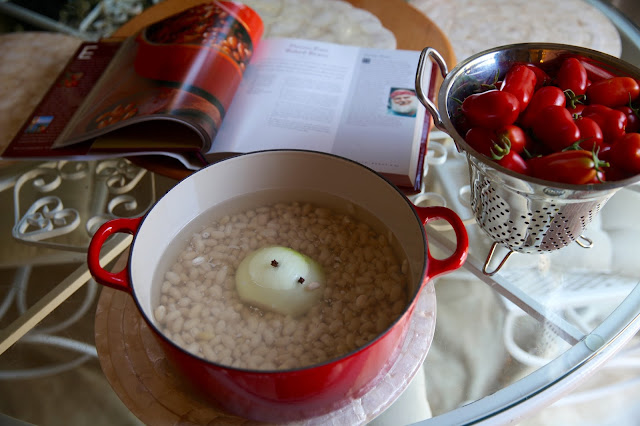 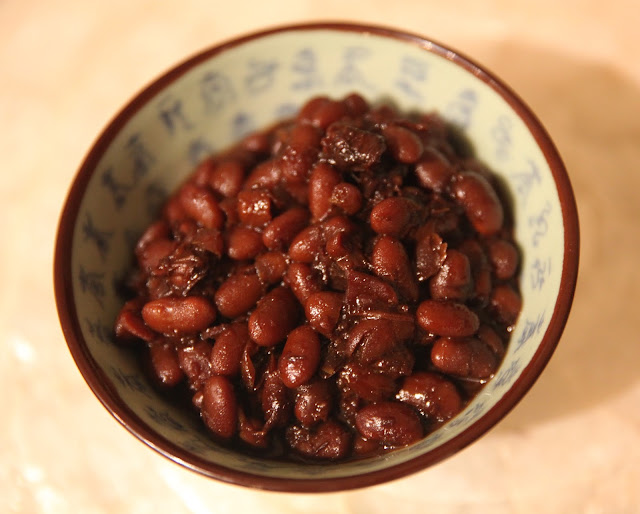 As much as I loved Grandma Elsie's baked beans, the exact recipe has been lost to time. When I asked our mother, Dianne, to look for the recipe, and asked why she didn't make them at our house, she said that grandma's recipe had so much sugar, that she was reluctant to make them. She also couldn't find the recipe. This is a version of baked beans that I love, and I like to make when I have a day at home to let the beans cook slowly in the oven in my beautiful red Le Creuset enamel pot. They taste like Grandma Elsie's baked beans. If you have only had baked beans out of a can, you will find that these beans are completely different in taste and texture. They are well worth the time and effort involved in making them. 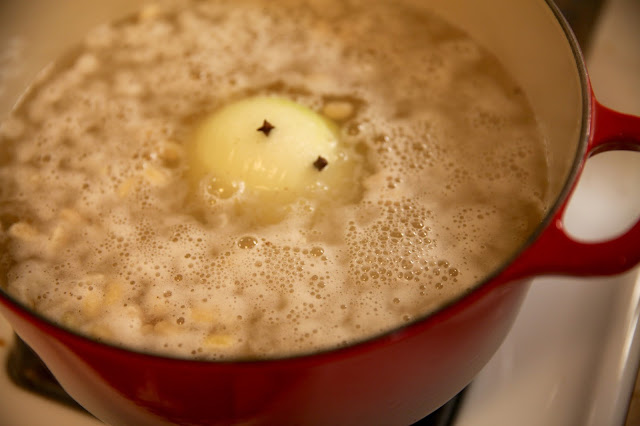 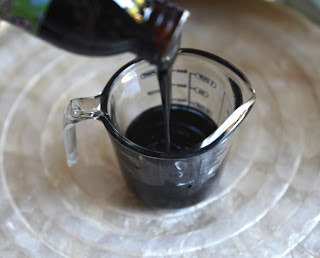 Procedure:
Soak the beans overnight. When ready to cook the beans, preheat oven to 275 degrees. The beans will need 5 to 6 hours in a slow oven. You can use a crockpot if desired and cook on low for eight hours. The first steps are the same however.

1. Add the half and onion to the bean pot and bring the beans to a boil. Simmer on low for 45 minutes to an hour. Drain and reserve the liquid. 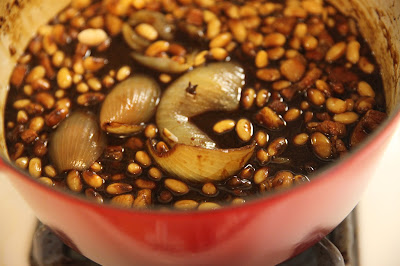 2. Add the rest of the ingredients to the pot with enough of the reserved liquid to cover the beans. The beans do not need extra salt. The salt pork adds enough salt to the mixture during the lengthy cooking. 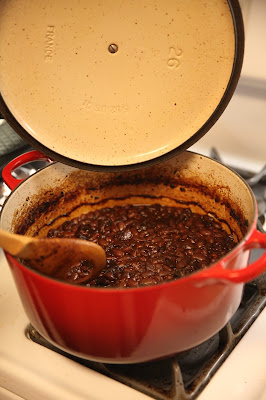 3. Place the beans in the preheated oven and cook for roughly six hours, stirring every hour and adding liquid if the beans get too dry.
4. Allow beans to cook with the lid off in the oven during the last forty-five minutes of baking. They will get a lovely crust on the top. Drizzle with honey after they are removed from the oven if desired.