The Health Benefits of Honey and How to Make Honey Simple Syrup: Paleo Beverages 101

"More than 30 years ago, there was a big push by the doctors and the government to get people to eat less fat. That was to help lower the rate of heart disease. Low fat they said means heart healthy. So, out went the fat, but in many foods, to keep them tasting food, in went more sugar. And so, here we are today, as you've heard me say over and over again, we as a nation are more  unhealthy than ever. Not to mention fatter. You've heard a lot of theories as to why, but one in particular is getting a much closer look. It's about sugar. Everybody knows too much is bad, but I have been surprised to see just how bad." ~ Dr. Sanjay Gupta

A few months ago I was perusing through my feed on Facebook, and I ran across a post featuring a Paleo Margarita by Danielle Walker of Against All Grain. She was sharing a recipe from her brother, Joel, who has a blog called Worthybar. For Danielle's post click here. The information was exciting for me, because I am trying to keep refined sugar out of my diet. If you are one of the few who hasn't heard just how bad white sugar or HFCS is for you, here is some food for thought from a 60 Minutes segment from 2012. Sugar is known to be a toxin in the scientific/medical community, and studies link is not only to diabetes, but heart disease, cancer and other serious illnesses. Enter honey stage right ...

The good news to this sweet conundrum, is that raw honey, a product made from bees which is whole and unadulterated—not refined in any way—can be eaten safely. New research is proving what ancient wisdom has always known—raw honey from bees, consumed in moderation, is not only delicious, but good for you, too.
Honey is alchemy of the highest order. Merriam-Webster defines alchemy in this way: a power or process of transforming something common into something special.
Honey from our friend the bee is transformed from pollen, as we all know, and in a magical process, is converted into a sweet, thick and heavenly ambrosia. I can't think anything more mysterious, delicious or just bursting with the power of nature than honey.

Michelle recently shared a great recipe for Curry Chicken Salad which is made with honey. In that post she linked to an article entitled, Does It Matter If a Sweetner Is Natural?, which I had shared with her from one of my favorite health professionals, Chris Kresser, L.Ac. In my opinion, which is based on 20 plus years of studying nutrition and herbal medicine, Chris Kresser's web page if full of the most cutting-edge and non-faddist information about nutrition and diet. I am definitely an advocate. Chris has this to say about honey (the link to the full article is highlighted above):

"...honey has long been an important food in the human diet. Its fructose to glucose ratio is similar to that of high fructose corn syrup, with about 38% fructose and 31% glucose (the rest being primarily water). Honey also contains enzymes and other proteins, trace minerals, flavonoids and other polyphenols.
Although honey is “Paleo” even in the strictest sense, it can be easy to think of it as just another source of sugar; better than table sugar, perhaps, but still an indulgence that should be kept to an absolute minimum. Sugar is sugar, right? On the contrary, increasing evidence indicates that honey is a functional food with uniquely beneficial physiological effects.
For example, two human studies found that supplementing with 3-5 tbsp of honey per day (depending on body weight) increases serum antioxidant levels, including vitamin C and glutathione reductase. In another study, the same dose of honey lowered plasma prostaglandin levels by 48-63% after 15 days, signaling a reduction in inflammation.
In overweight and obese patients, consumption of about 3.5 tbsp honey per day for a month resulted in lower LDL cholesterol, triglycerides, and C-reactive protein (particularly in people with elevated values), and higher HDL cholesterol. In another study, honey also reduced levels of homocysteine and blood glucose.

Honey also has antibacterial activity, and can shorten the duration of acute bacterial diarrhea in children. Honey might even be an effective treatment in some cases of h. pylori infection. Other potential benefits of honey include antiviral, anti-tumor, and anti-mutagenic effects, and reduction of IBD-associated inflammation, but these have yet to be tested on humans. So it would appear that honey has many benefits that outweigh the potential downsides of consuming a concentrated sweetener. I recommend using raw honey, which will have the most enzymes and nutrients when destructive heat has not been used."
So armed with this information and the realization that, "Wow, honey isn't just a more natural form of sugar—it actually promotes health and weight loss!", I resolved a few months back to make a more concerted effort to use honey in my diet and eliminate refined sugars as much as I possibly can. Stevia is another valid choice for a natural sweetener, but it has a bitter after taste for me, and regrettably, I am not a fan.
The problem with honey though, is that I have found it to be inconvenient to use. It is gloppy, messy, and sticky and is hard to measure accurately. It also doesn't combine well into cold drinks. In addition, it crystallizes if is sits in your cupboard for too long, and high heat destroys its beneficial properties. What changed all that for me, however, was learning how to make simple syrup from honey, prompted by the Worthybar Paleo Margarita recipe. This little asterisked comment at the very bottom of the post caused a light bulb to turn on in my head:

* Honey syrup can be made by simply combining equal parts honey and filtered hot water (not boiling!), then stirring to incorporate the two. I suggest using a lighter honey, such as raw clover honey, as you don't want the flavor of the honey to overpower the drink. You can make 8 to 16+ ounces at a time and store in a sealed bottle or container in the fridge for up to a month.


Thus began my experimentation with simple syrup made from honey, and since then I have found it has solved all of the issuers that plagued me in the past with using honey straight from the jar. It makes measuring a breeze, adding it to cold drinks is no problem, and I now keep a container of it in the fridge at all times. I have discovered so many uses for it, that I think you will love it, too. Here's how to make your own:

I have found a multitude of uses for honey simple syrup since I began making it. I keep a jar in the fridge at all times. I use it when make my day off Mocha on Saturday morning. On this hot summer afternoon while I am writing this post, I am using it to sweeten my iced Chai. It is also great for cocktails (simply replace equal parts of simple syrup with honey simple syrup). It can also be used for  smoothies, vinaigrettes or anything else that would benefit from a touch of sweetness.

Procedure:
Use one part honey to one filtered water. In the simple syrup I am making in the photo, I scooped the honey from the one pound jar into the empty two pound jar. I then pour hot water (not boiling) in the just emptied small jar to the top. Stir the hot water in the jar to incorporate all the remaining honey, and then pour it over the honey which is now in the large jar. Do not stir. Place lid on jar and allow to sit for about 30 minutes. This will allow the hot water to slowly soften the honey, and it will become easy to mix. It also helps keep the honey cool, preserving all of the health benefits. When honey is softened, stir until the water is well mixed in, and then I usually finish off my simple syrup by giving it a good shake to make sure that all the honey is dissolved. Transfer honey simple syrup into a covered container and store in the refrigerator. It will last at least a month—most likely longer since honey is naturally antibacterial. 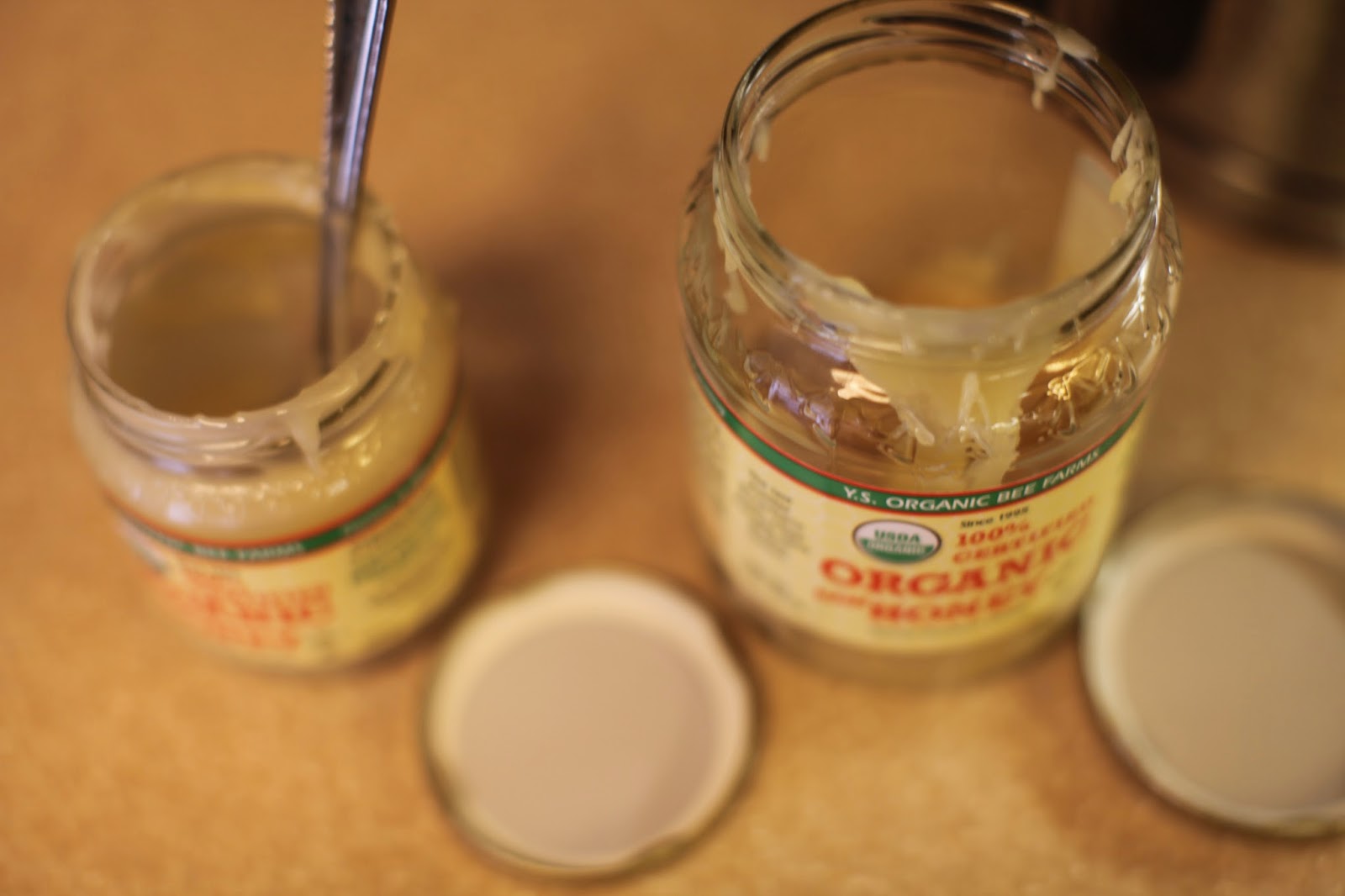 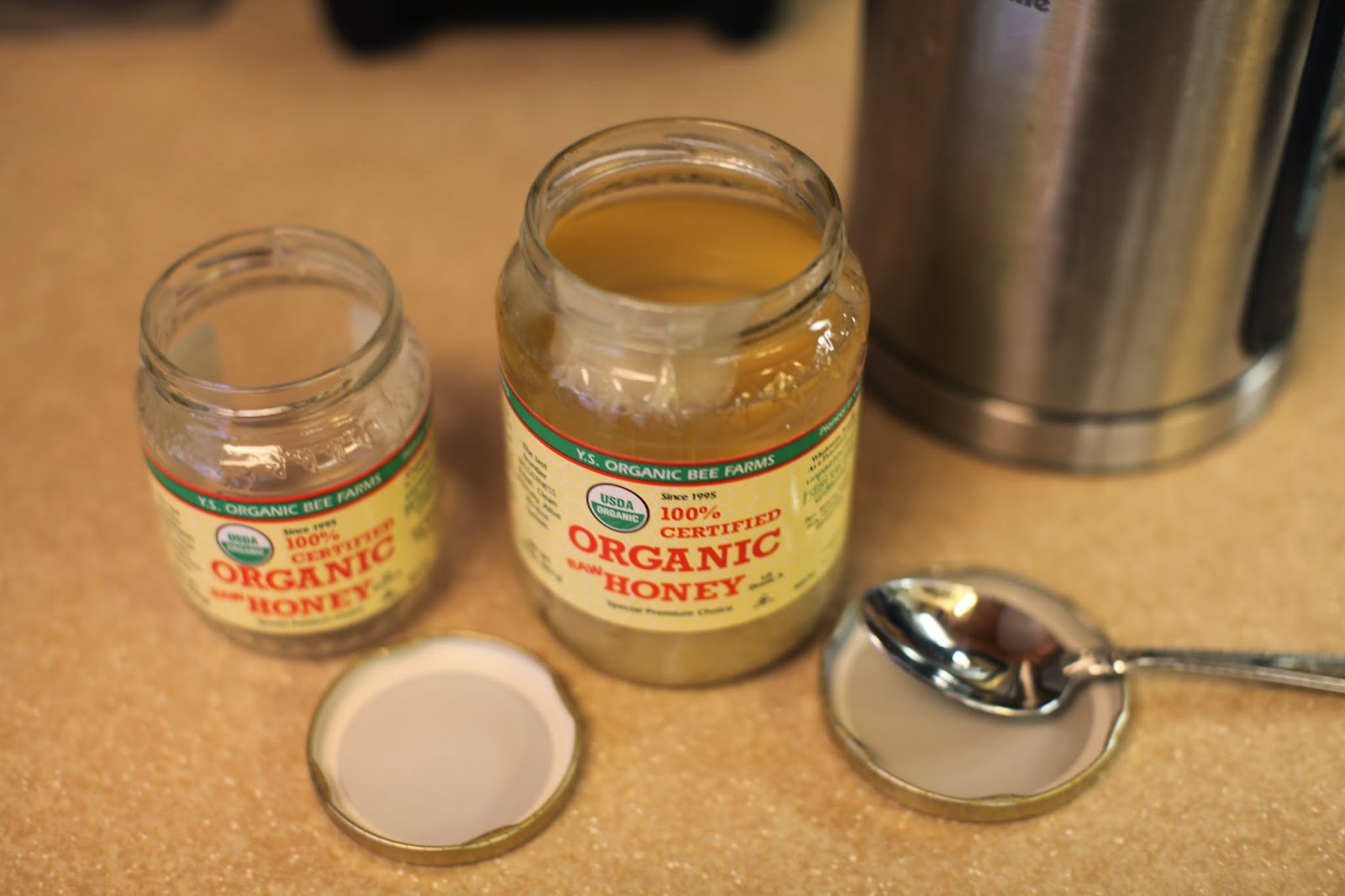 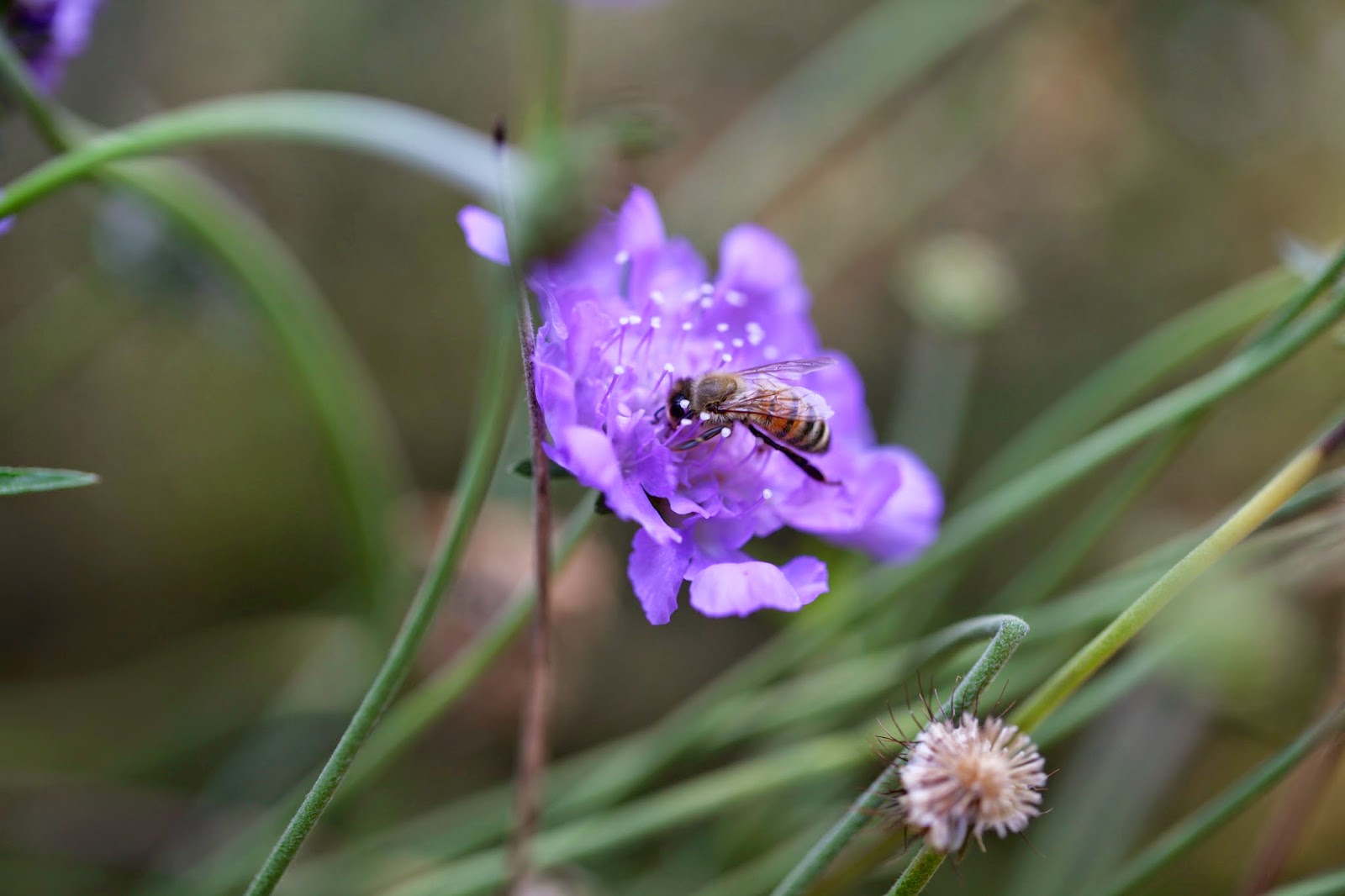 Posted by Salvation Sisters at 3:29 PM