The sea is as close as we come to another world. ~ Anne Stevenson 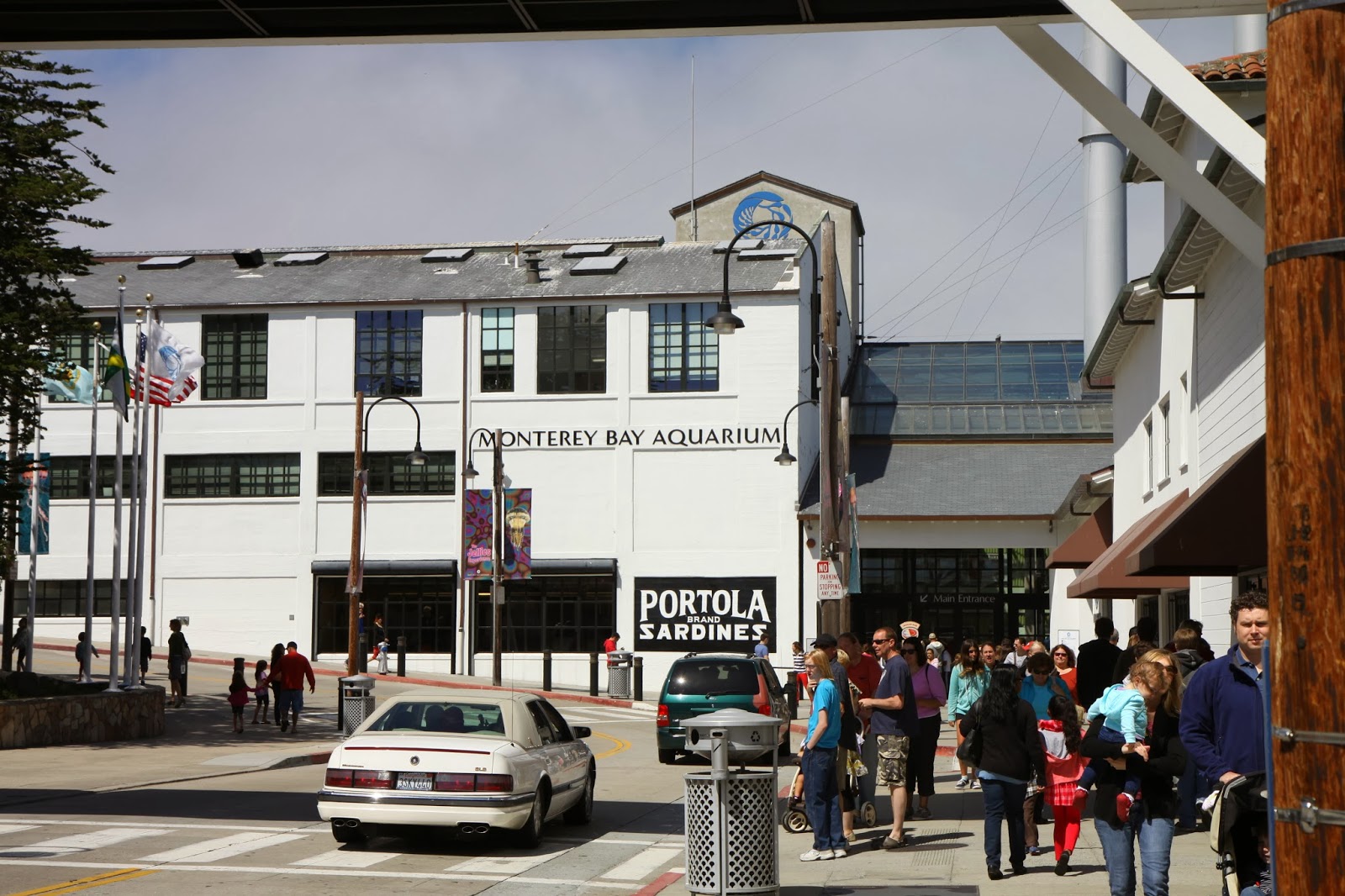 This past fall, Mark and I endured a two hour, very high-pressure timeshare presentation, just to be able to spend two nights on the stunning and singular Big Sur coastline. The swanky facility located in Carmel, had sent me an offer for a very reduced rate for a two night stay in one of their townhouses, if I agreed to submit to a meeting with their sales staff on Friday afternoon. This would be worth it I reasoned, to be able to spend a weekend in some of the most beautiful country in California, and receive a $100 credit to the gorgeous Pacific's Edge Restaurant.
An added incentive was that Mark had never had the pleasure of visiting the wonderful Monterey Bay Aquarium, which would be not too far from our lodging. I had been to the aquarium twice before. On my first visit, I was the guest of a friend who was the organizer of a spectacular holiday party which was held there at night. The other occasion was part of a Team Build with Whole Foods Market. It had been a few years since my last visit, and I was excited to share the experience again with Mark, who would be a first-timer. 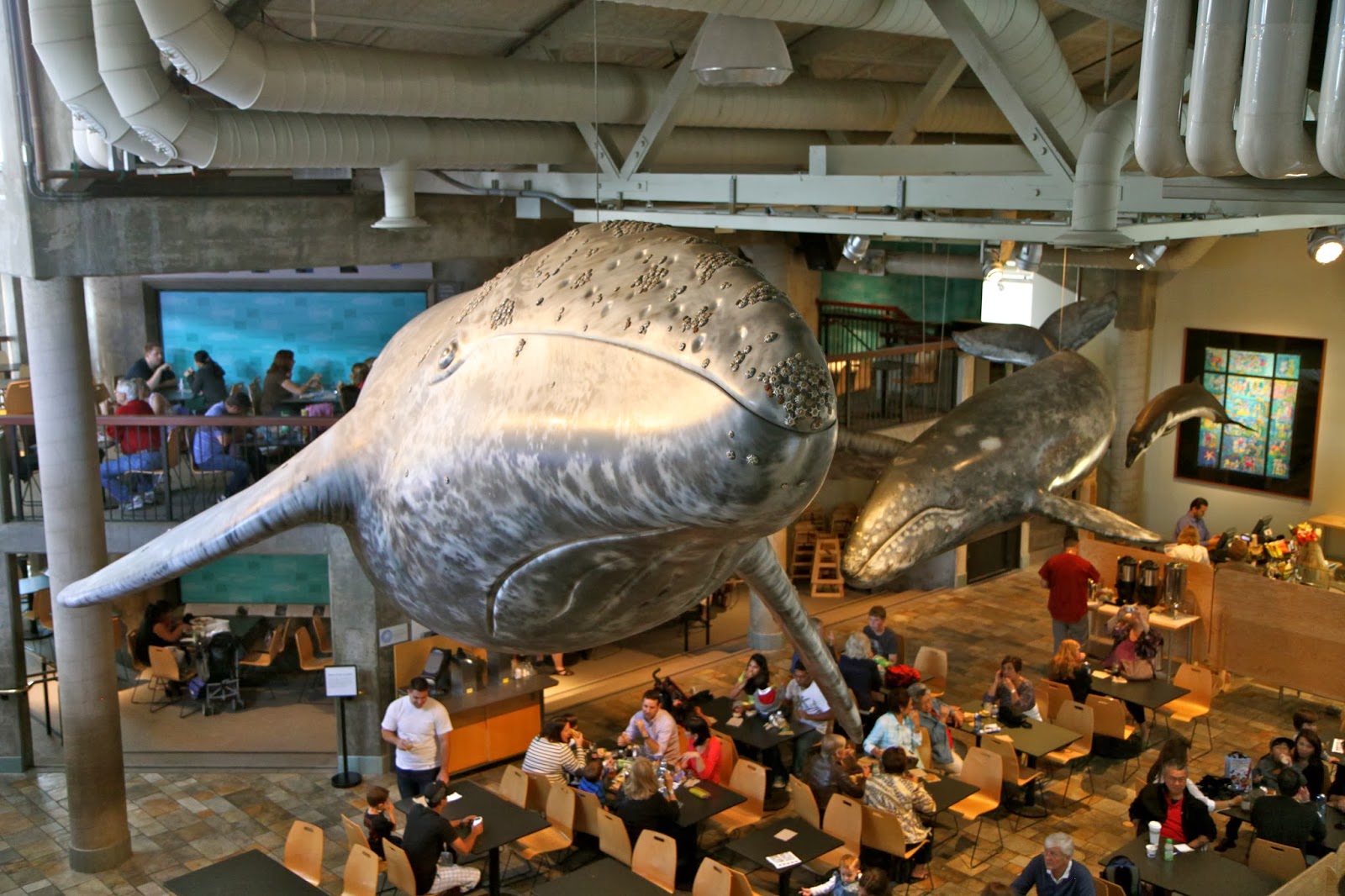 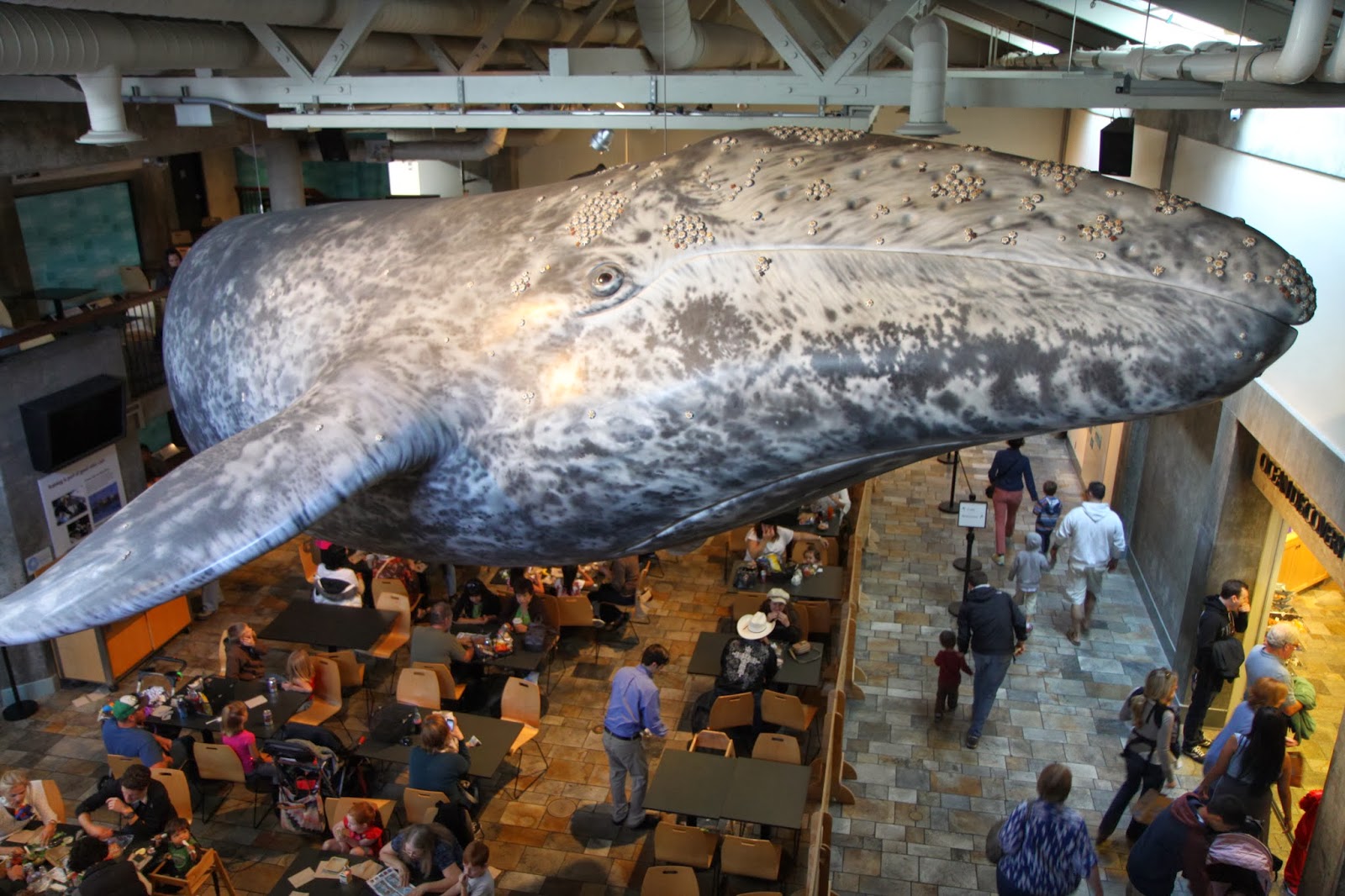 The building that houses the aquarium is a modern, large and beautiful, and has majestic views of the world-famous Monterey Bay. The mission of the nonprofit Monterey Bay Aquarium is to inspire conservation of the oceans. Education abounds. Monterey Bay is home to many kinds of sea creatures and wildlife. In the spring, gray whales can be seen on their migration heading south from the Bering Sea to the calving lagoons off Mexico's Baja Peninsula. This event attracts killer whales who hunt the gray whales.
Thankfully, there are no captive marine mammals to be found here, other than sea otters, but there are many tanks that are populated with dancing jelly fish, sea turtles that glide in giant circles, and large schools of fish. In other venues, there are many varieties of delicate sea horses tethering themselves by their tiny tails to colorful coral outcroppings. In the largest tank, you will find bluefin and yellow fin tuna, along with stingrays and a large and menacing shark or two. 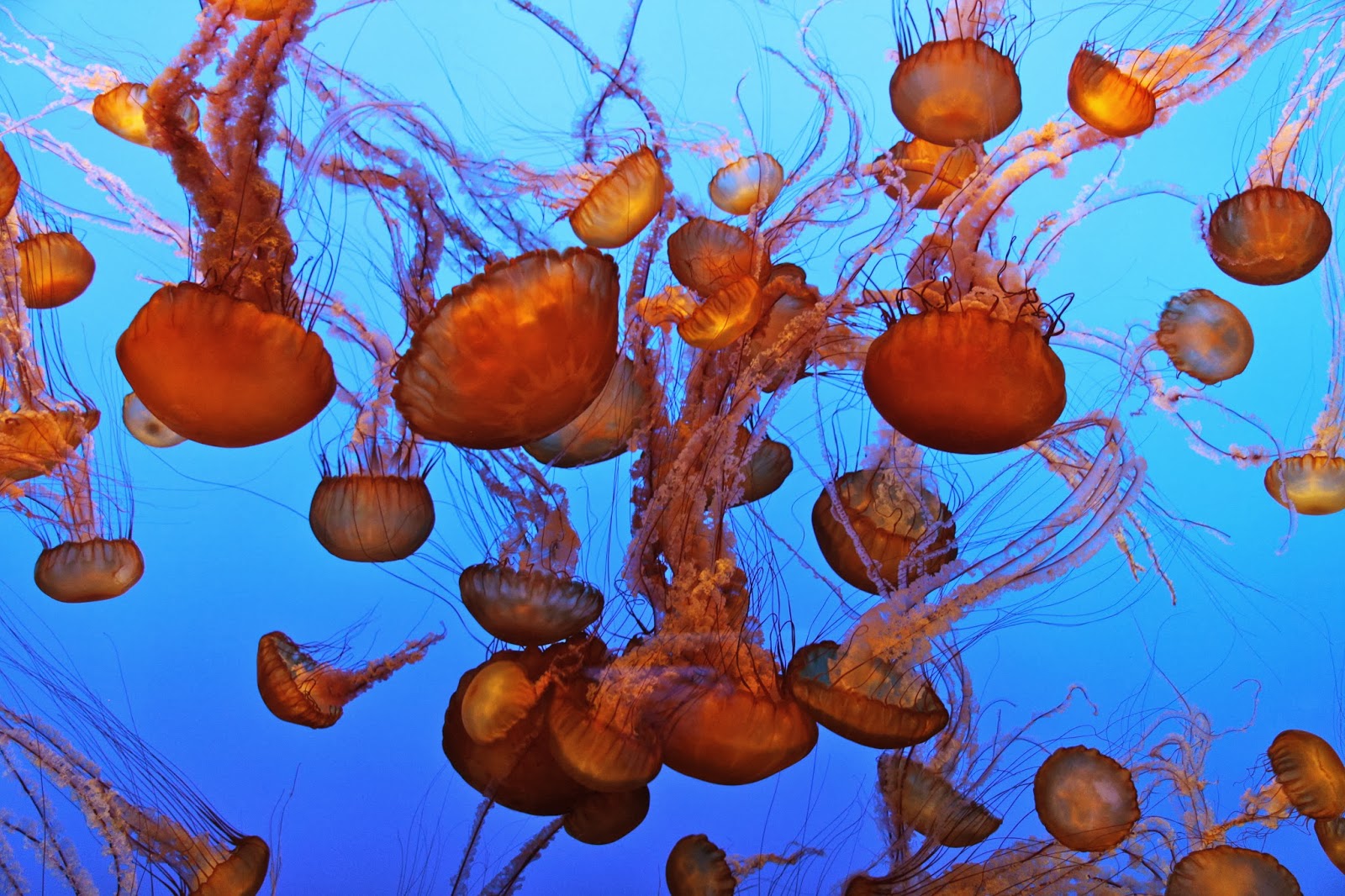 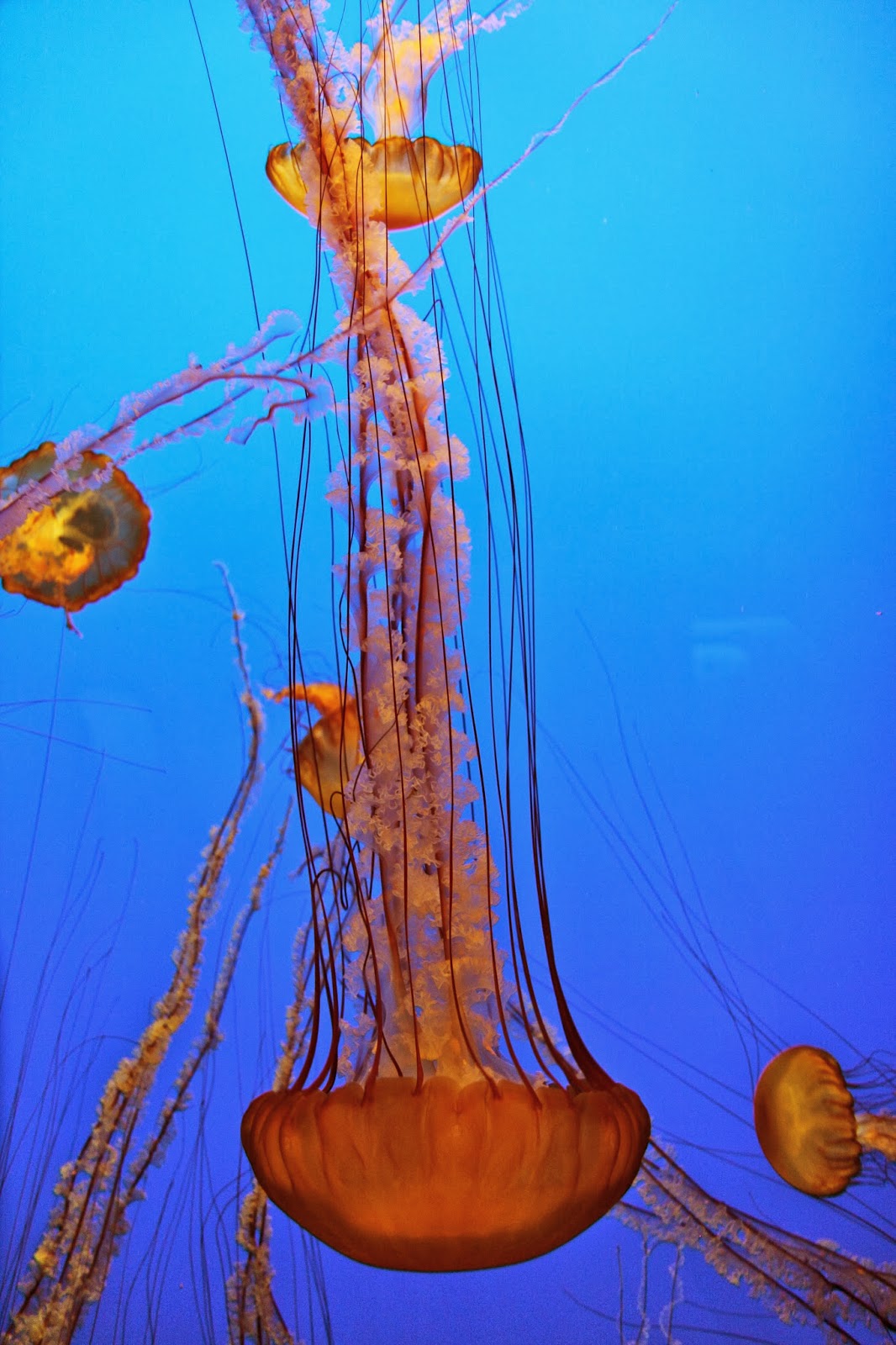 Life size and to scale models of marine mammals are suspended from the ceilings throughout the aquarium. Children of all ages look with their mouths agape at the amazing spectacle of it all. There is a sea otter exhibit and a penguin venue, both of which are both very entertaining. 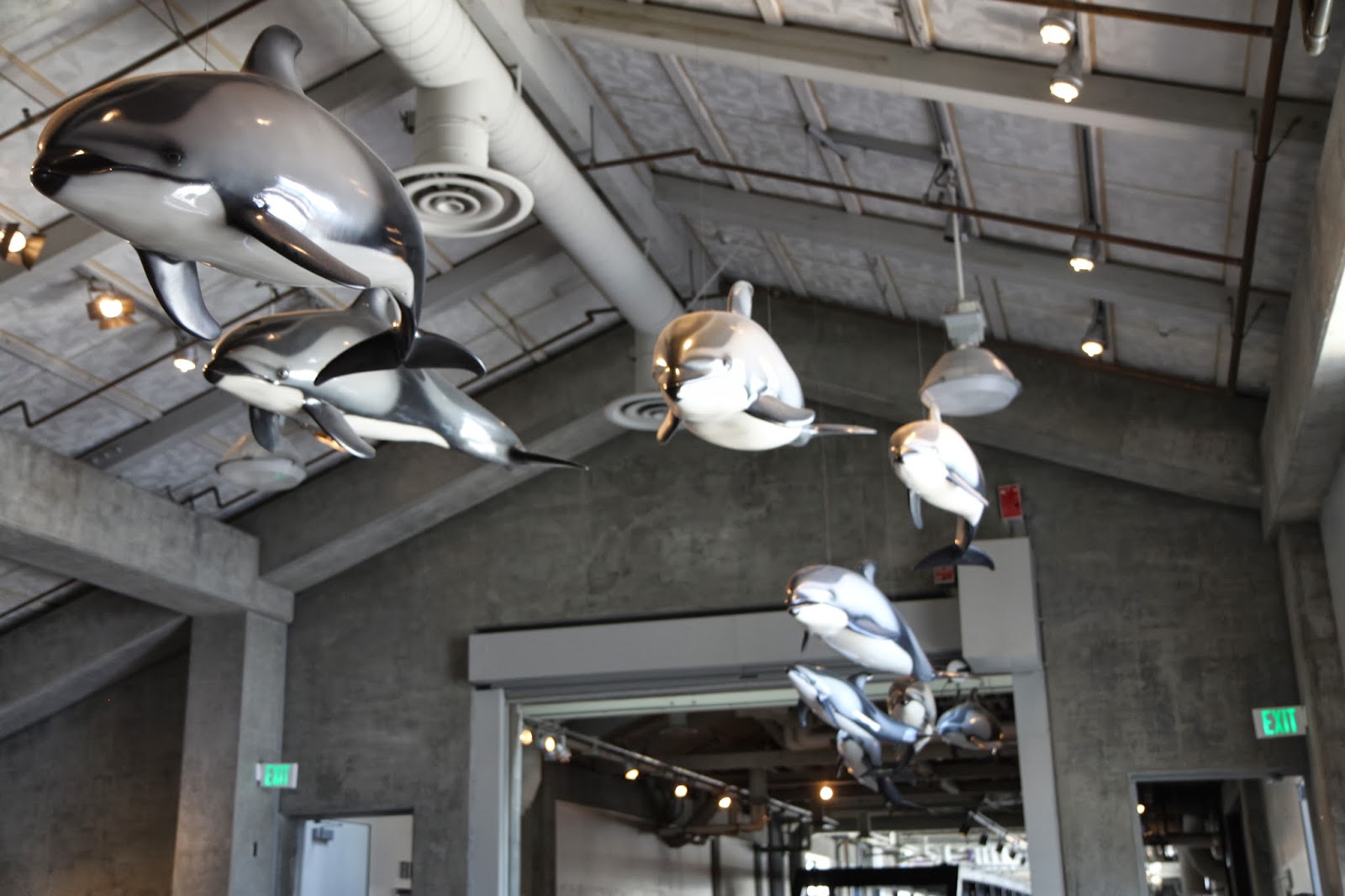 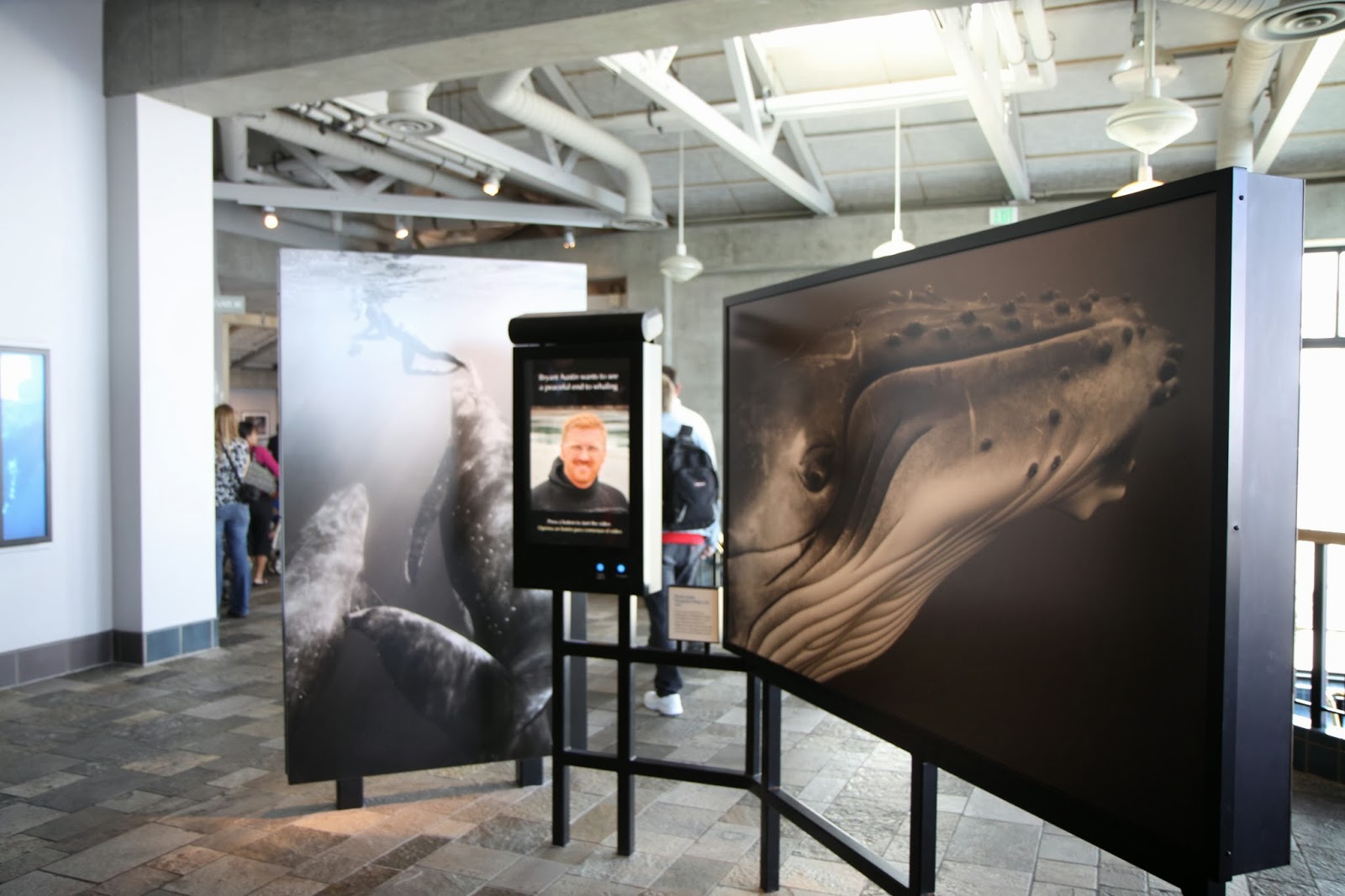 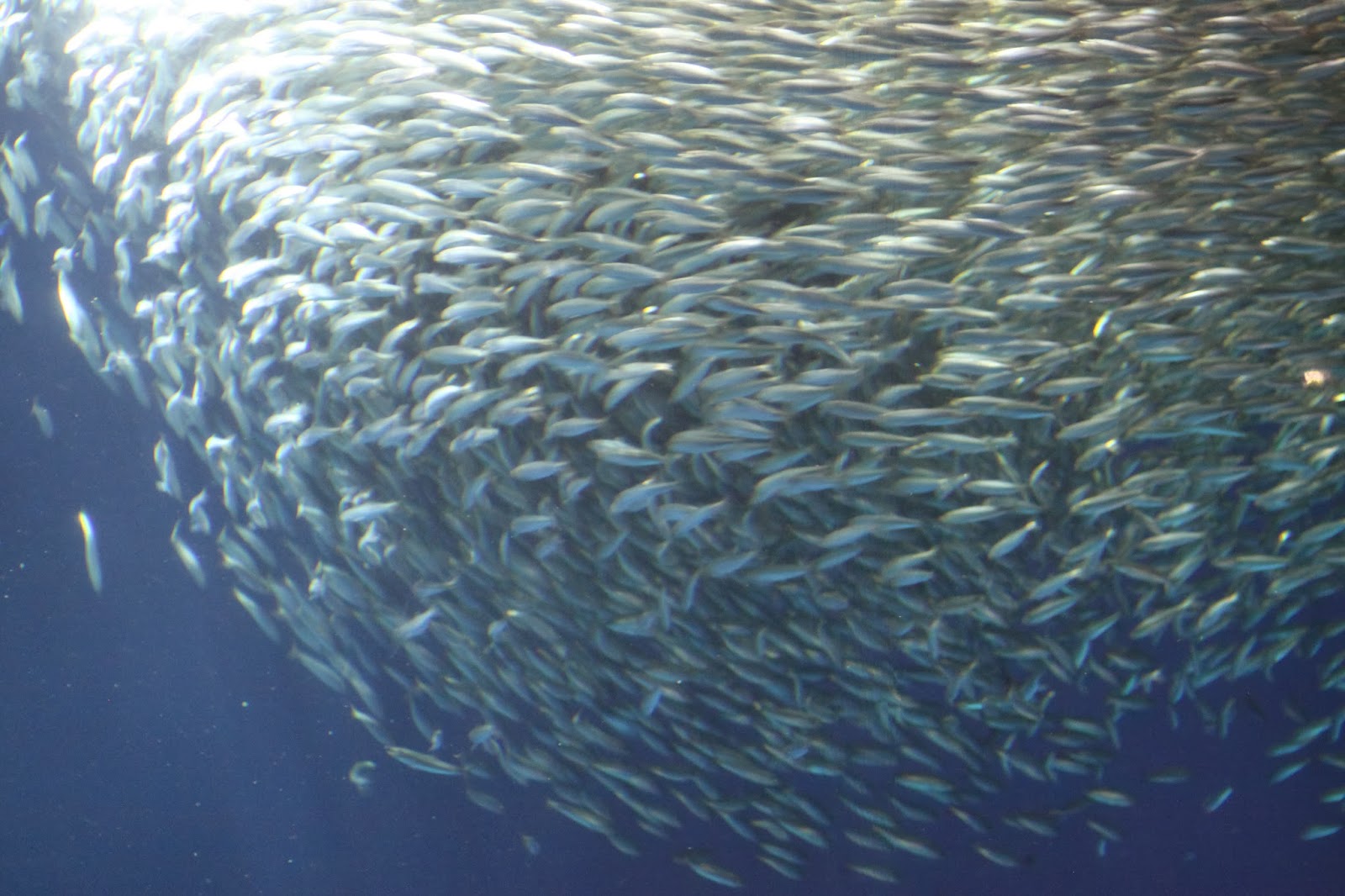 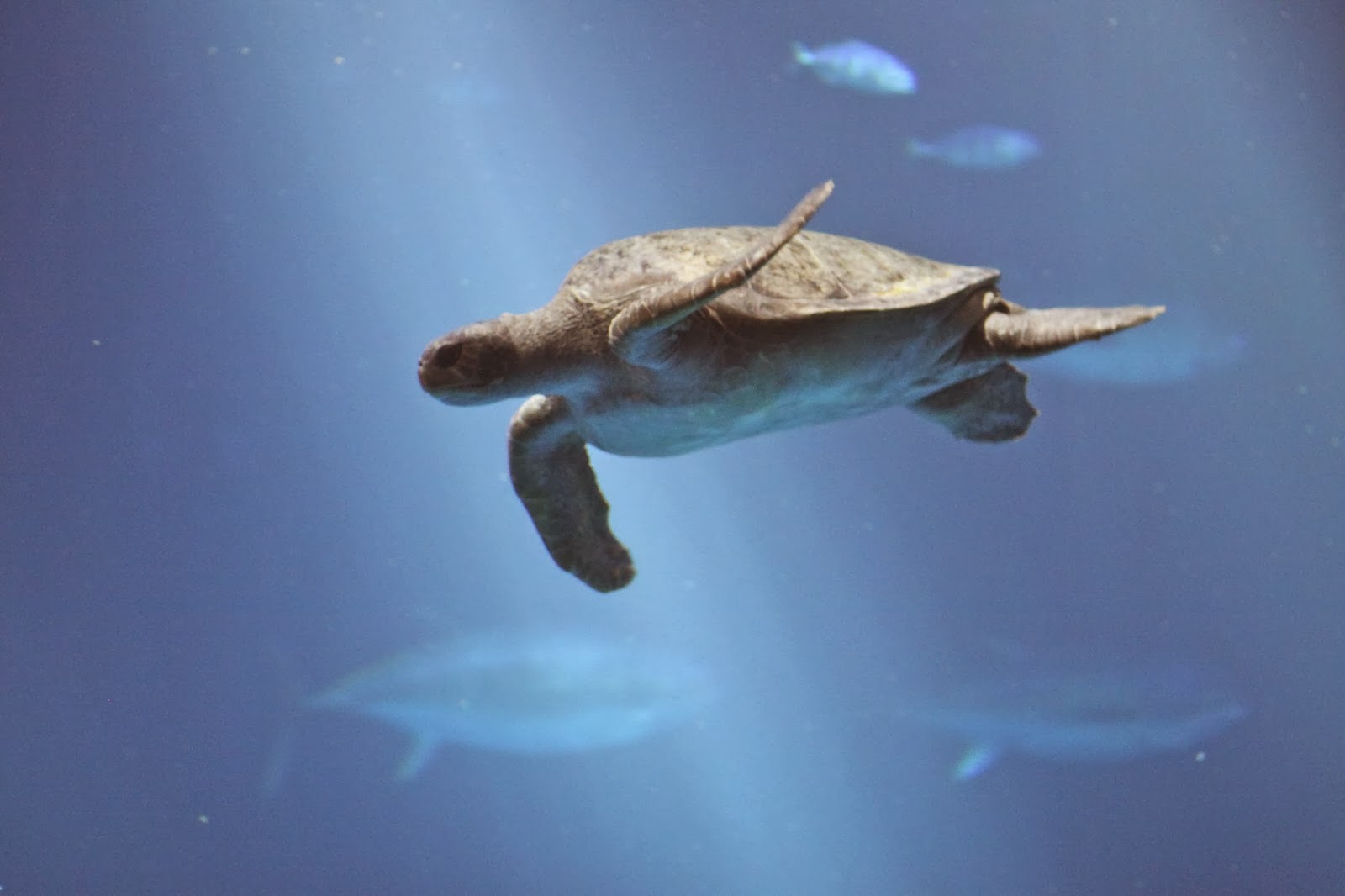 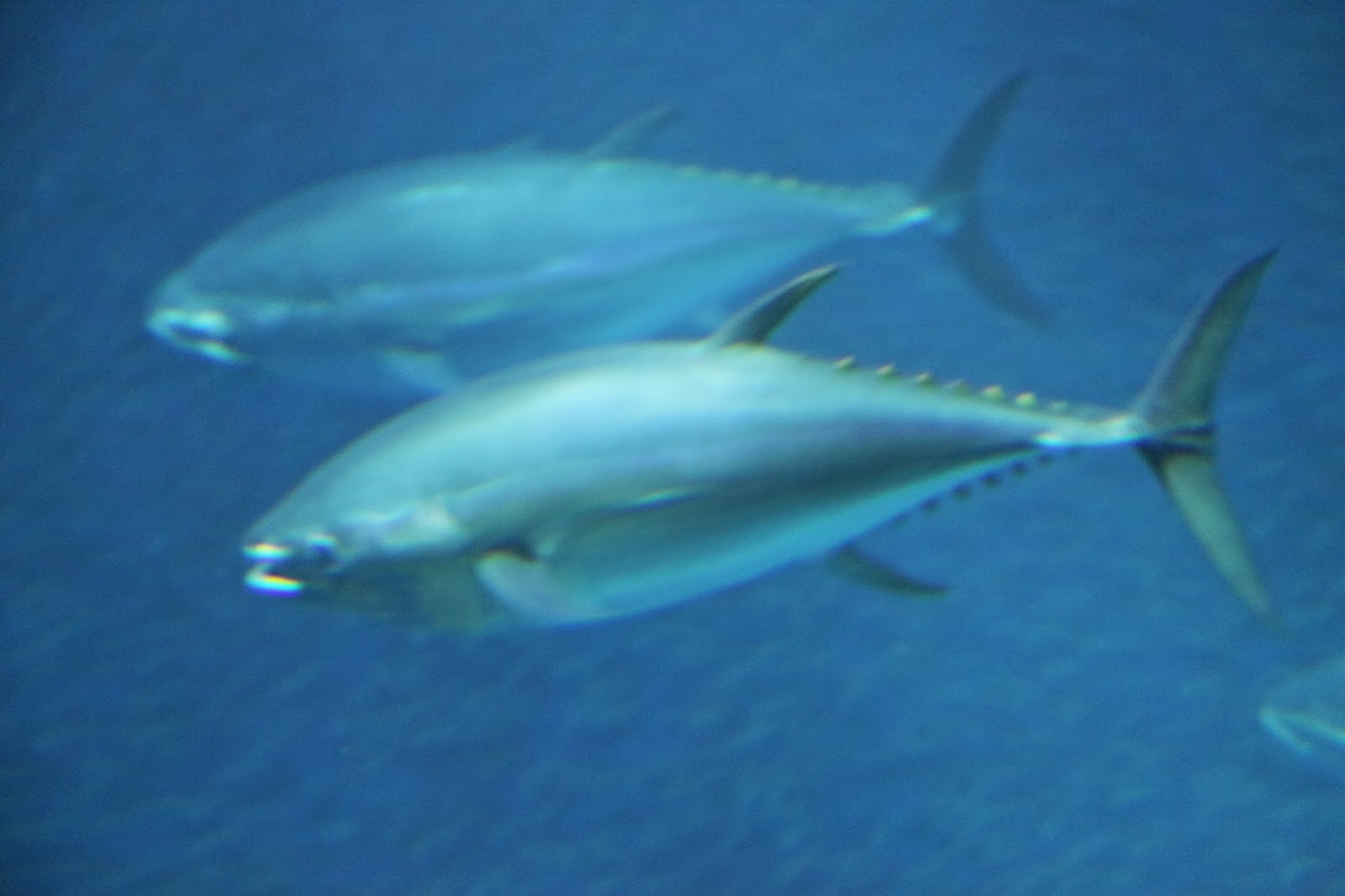 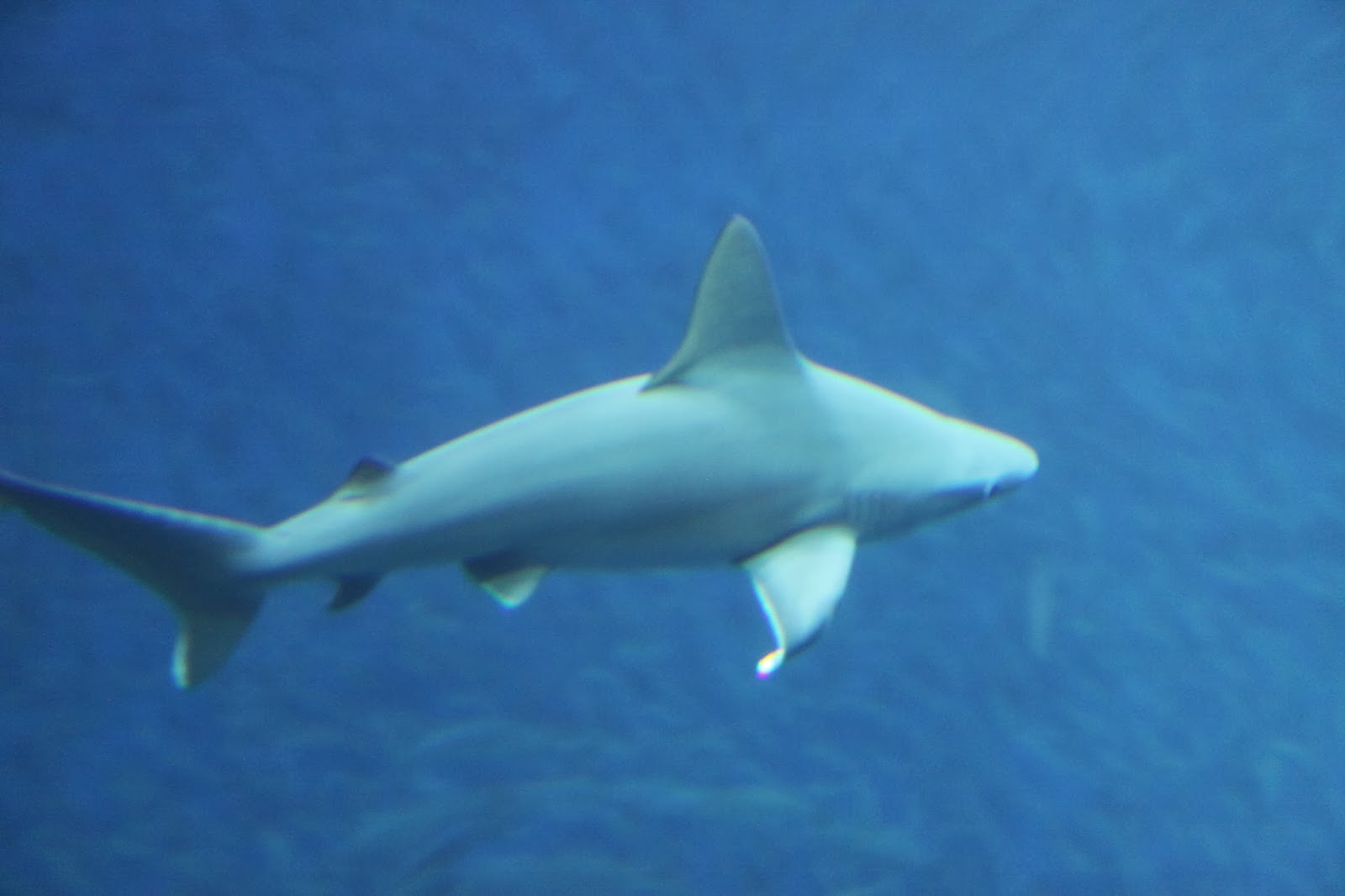 Monterey Bay has a rich history that was founding on fishing. The Monterey Bay area is also part of the larger area known colloquially as the Central Coast. From the MBA website:

It's been a boom and bust history for the Pacific sardine fishery. During the 1920s through the 1940s, sardines were the most important commercial fish in California. However, under high demand for canned fish, fish meal and oil, this species was fished to the point of commercial extinction. Due to strict fisheries management and improved habitat conditions, Pacific sardine populations began to recover in the 1980s and now support a modest fishery off California.

The message is clear in the exhibits, photographs and art displayed in the aquarium. We need to act now, if it is not already too late, to save our oceans. The photo collage in the photo below was created by artist Chris Jordan, and it is made from plastic waste that is a major source of pollution in our seas. 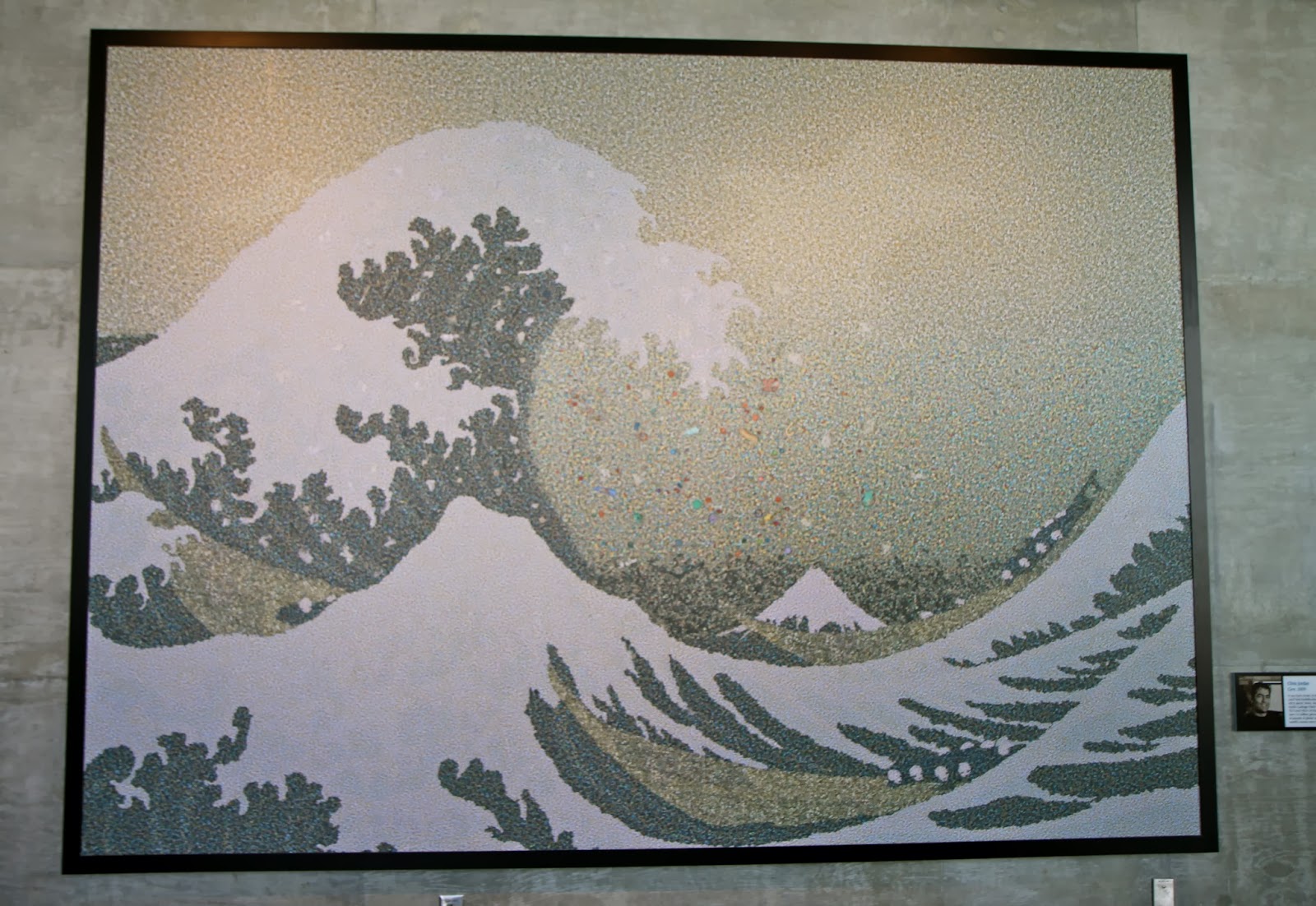 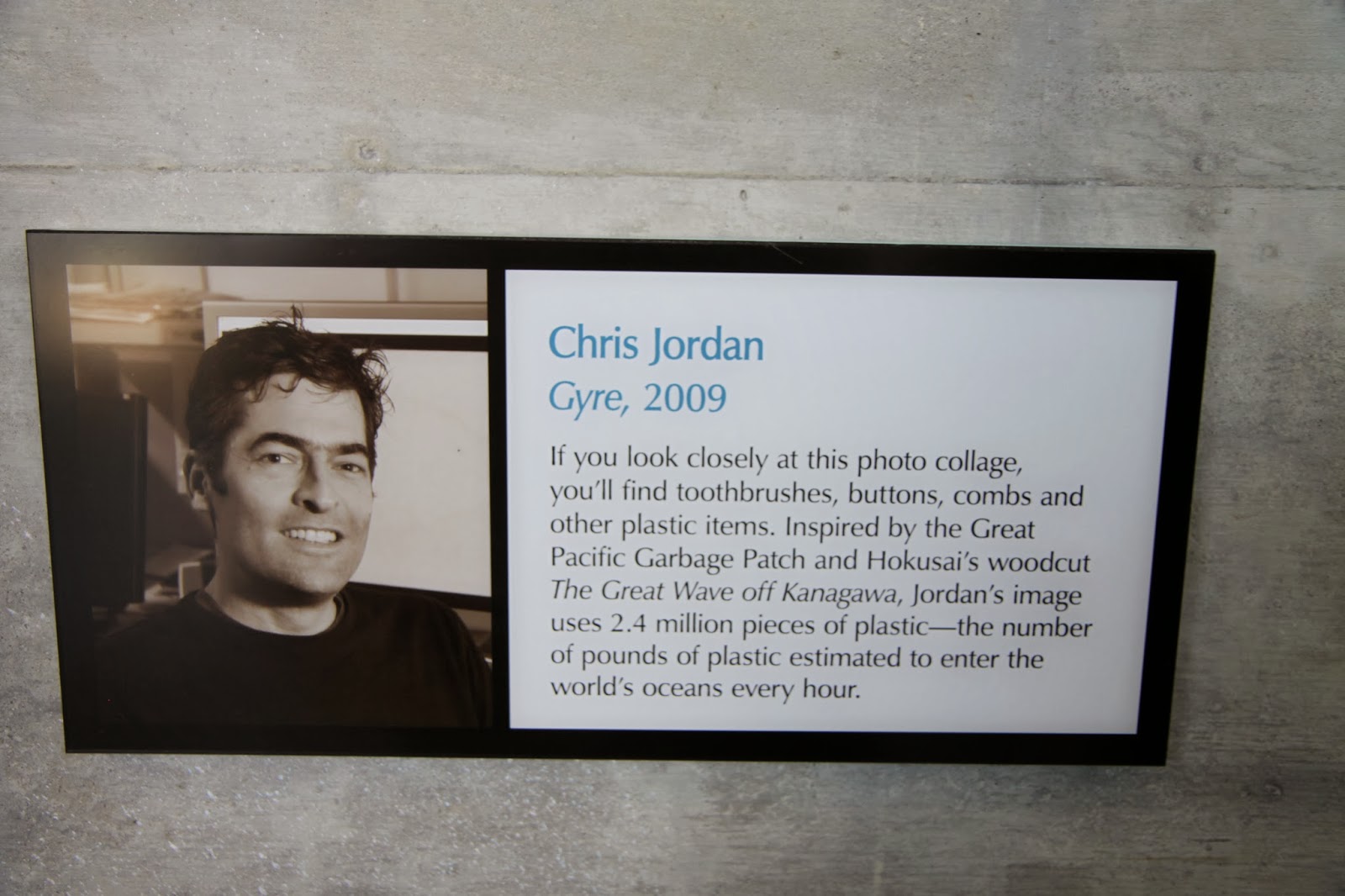 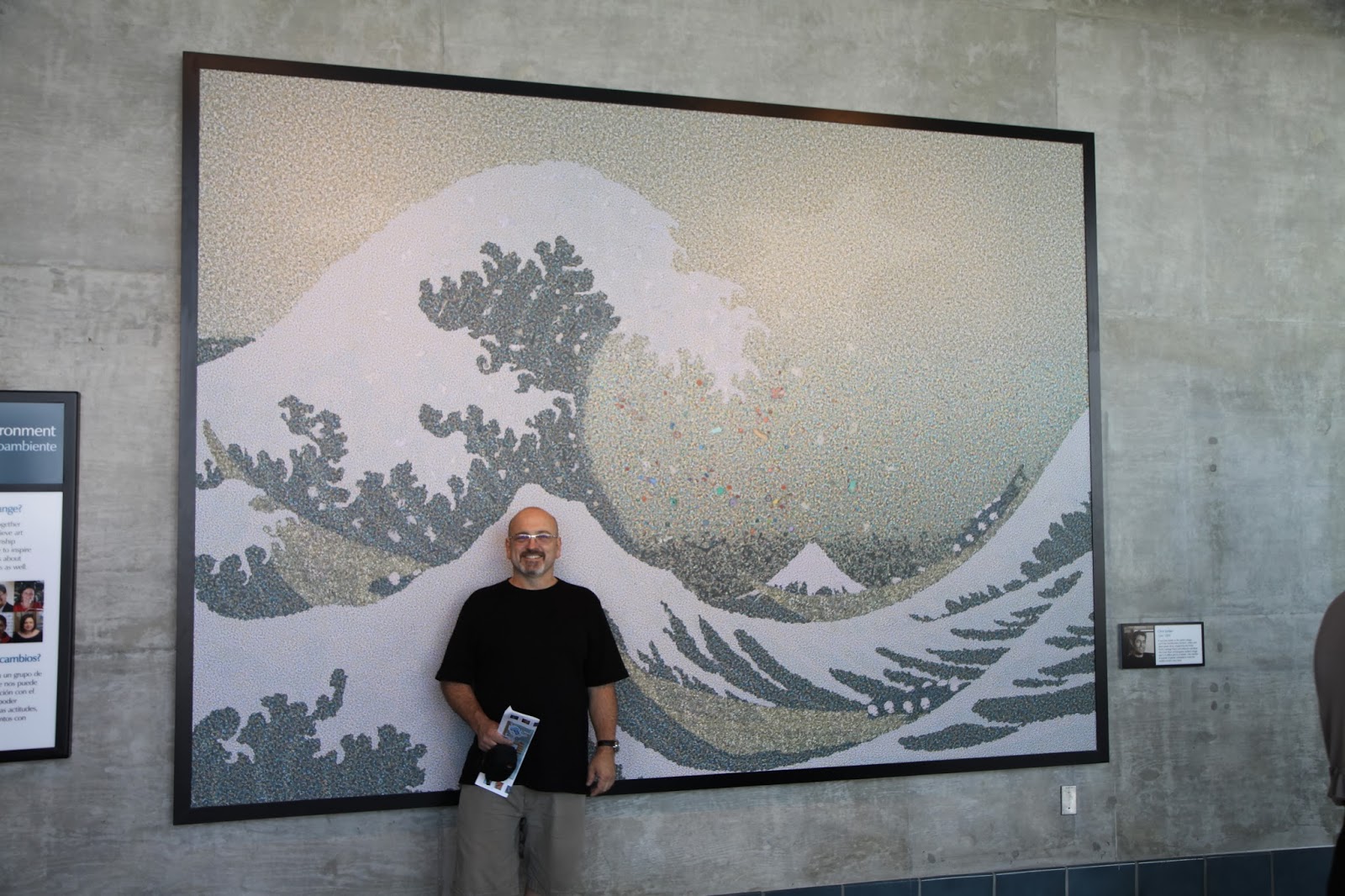 There is a large observation deck at the back of the aquarium, equipped with a telescope, that provides a great place to view a large stretch of the bay. 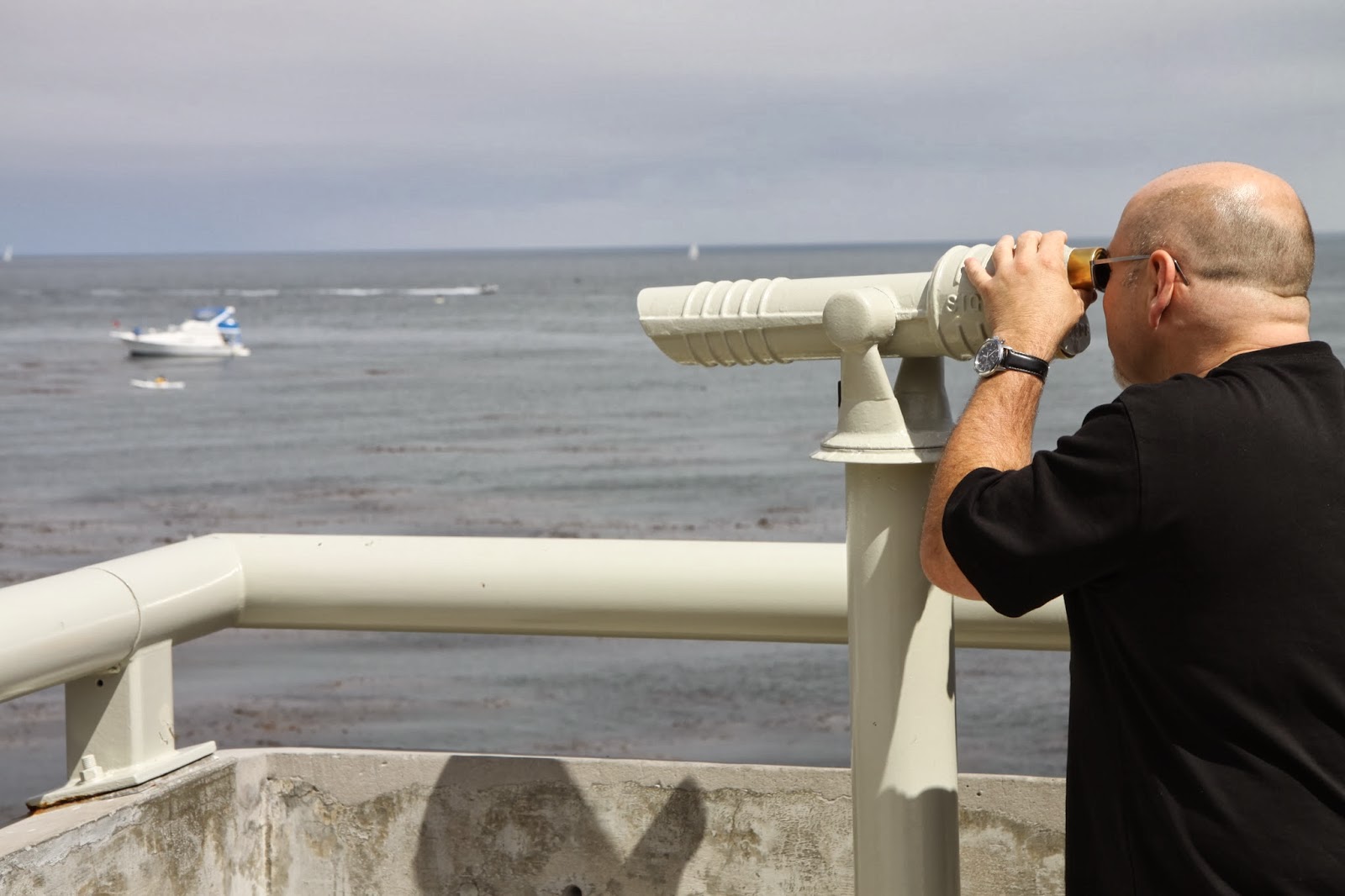 The aquarium is very near to the old Cannery Row—made famous by one of my favorite authors—John Steinbeck. This modern day fame has also brought with it all of the kitschy trappings of a tourist town. It is regularly the venue of vintage car shows on the weekends, and the sidewalks are crowded with visitors licking ice cream cones and chewing on salt water taffy—noisy kids in tow.
Even so, at the end of the day, when I am walking the old Ocean View Avenue (the name of the street when it was trod by the two best friends, John Steinbeck and Ed Ricketts), deep in my reverie, I like to imagine them strolling and enjoying the sea air. I picture the both of them engaged in a lively conversation about philosophy, poetry, writing or their next trip together on the sea. They return to Ed Ricketts' Lab for a drink, dinner and maybe a cigar. I remember that the two friends had planned another expedition together, this time to British Columbia. A week from their departure in May of 1948, Ricketts was driving home from dinner one evening, when his car was struck by a train not far from his laboratory. He died three days later, just a few days shy of turning 51.
And it is then—in the realization that one's life can end in a moment gone horribly wrong—that I think about the things that matter to me. I think about my family and friends—literature, poetry, writing, gardening, photography, and savoring the preparation of a nourishing meal. With that image in my mind—the one of the best friends walking together, deep in discourse—I resolve to keep pursuing my own passions and relationships, and hold close those that are dear to me. I will try my very best to imbue my existence with meaning—or at least some fun and laughter—until the clock runs out. 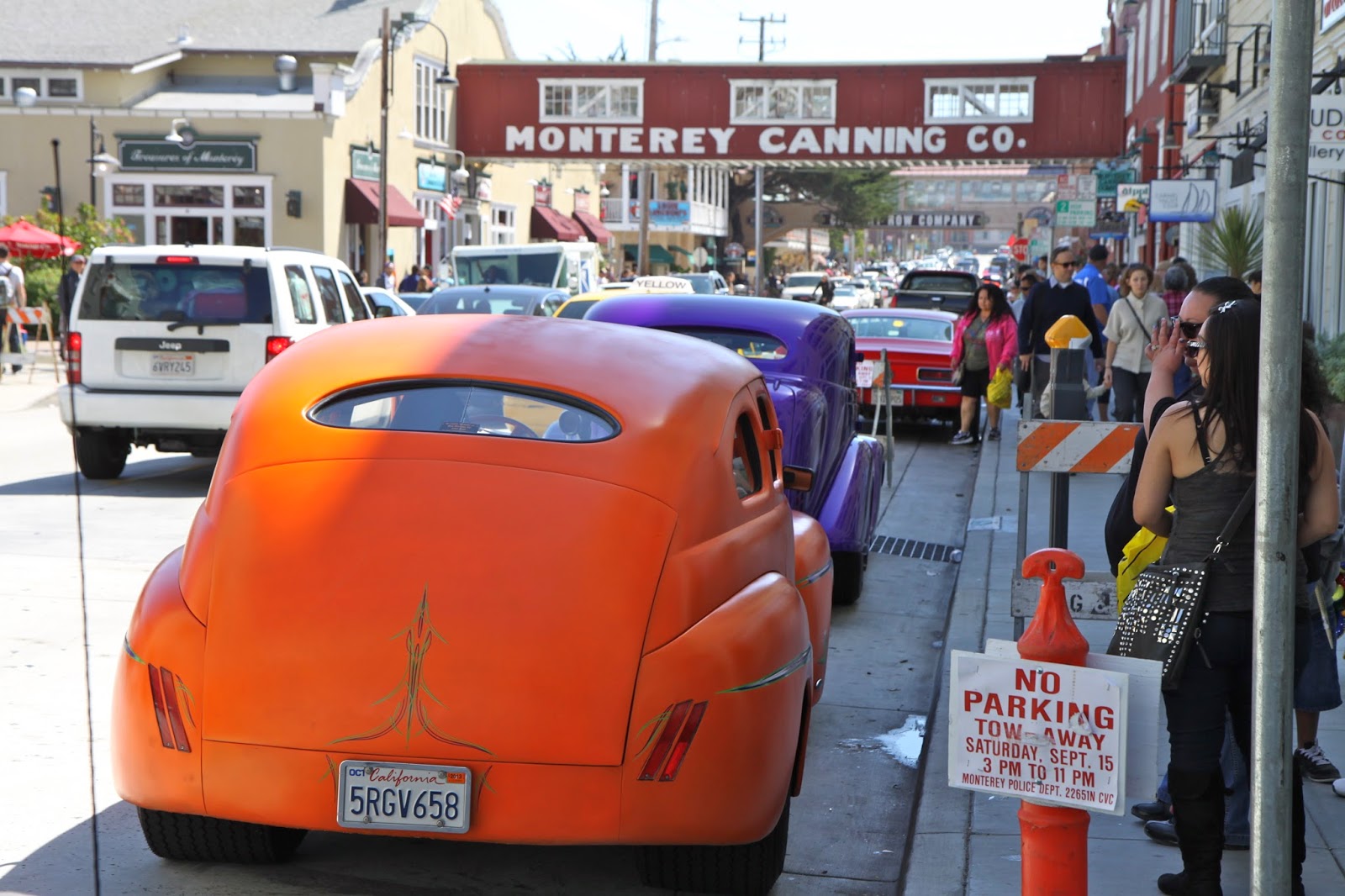 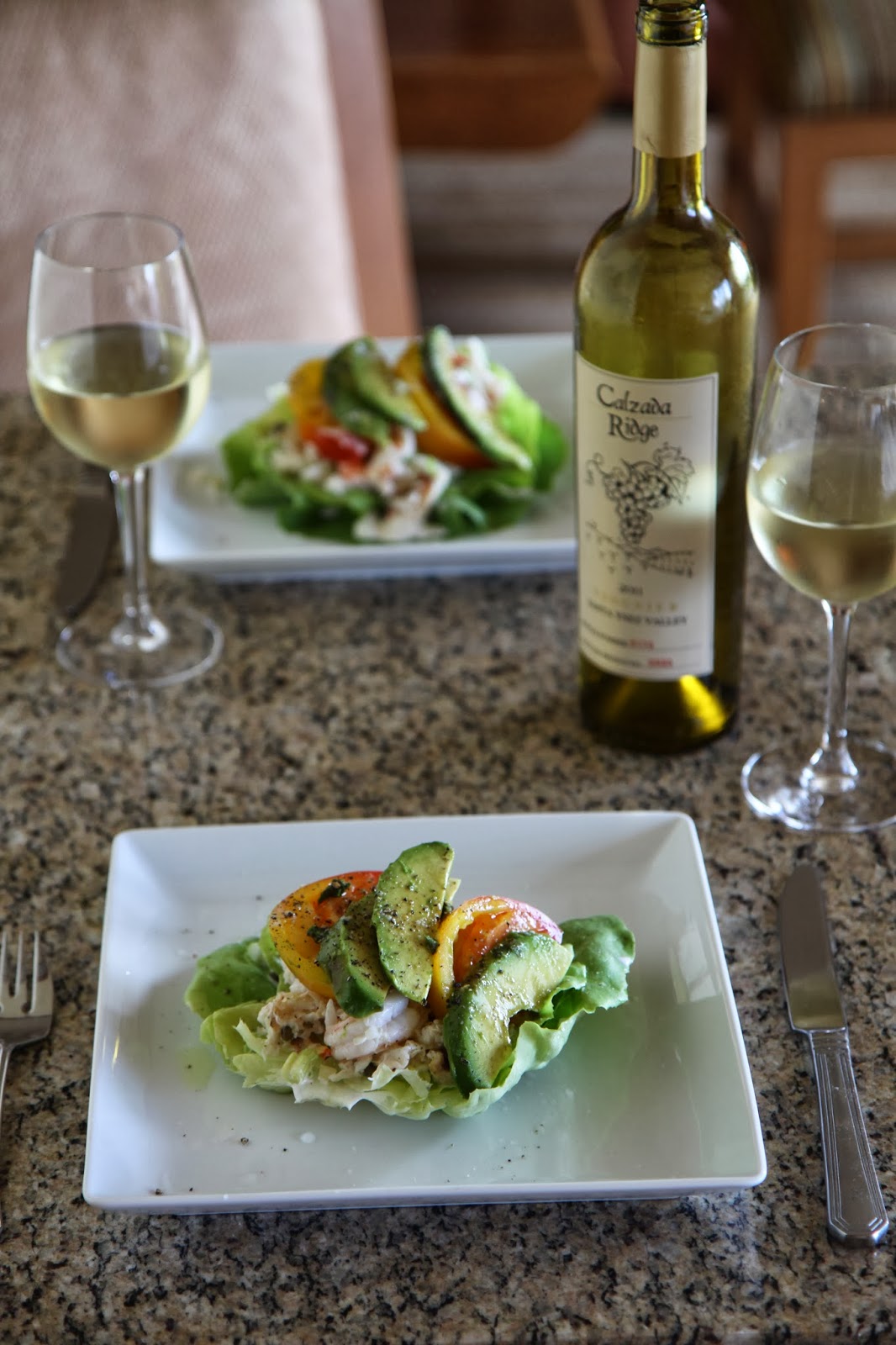 Mark and I stopped by the Whole Foods Market in Monterey to pick up food to make in the townhouse kitchen. Both of us were in the mood for seafood being that we were in a prime location to pick up the freshest and best available. Whole Foods also partners with the Monterey Bay Aquarium in ensuring that it purchases sustainable seafood for its stores.
We brought wine from home that we had purchased on recent trip to Los Olivos. It was a delicious Viognier from Calzada Ridge that we purchased at the Los Olivos Wine Merchant Cafe, made famous by the movie Sideways. We wanted a light lunch, since we would be doing some fine dining that evening at the Pacific's Edge Restaurant, which is perched on on an ocean cliff in Carmel, and us with window table seating.
Mark ended up creating delicious composed salads that were made with generous amounts of crab and shrimp that were tossed with a creamy citrus vinaigrette. He then topped the salads with grapefruit sections, and the final layer was created by placing avocado and tomato slices drizzled with olive oil and sprinkled liberally with sea salt and freshly cracked black pepper on the very top.
When choosing seafood, Monterey Bay Aquarium can provide assistance in making responsible decisions about consumption. Check out the link to the Monterey Bay Aquarium Seafood Watch. 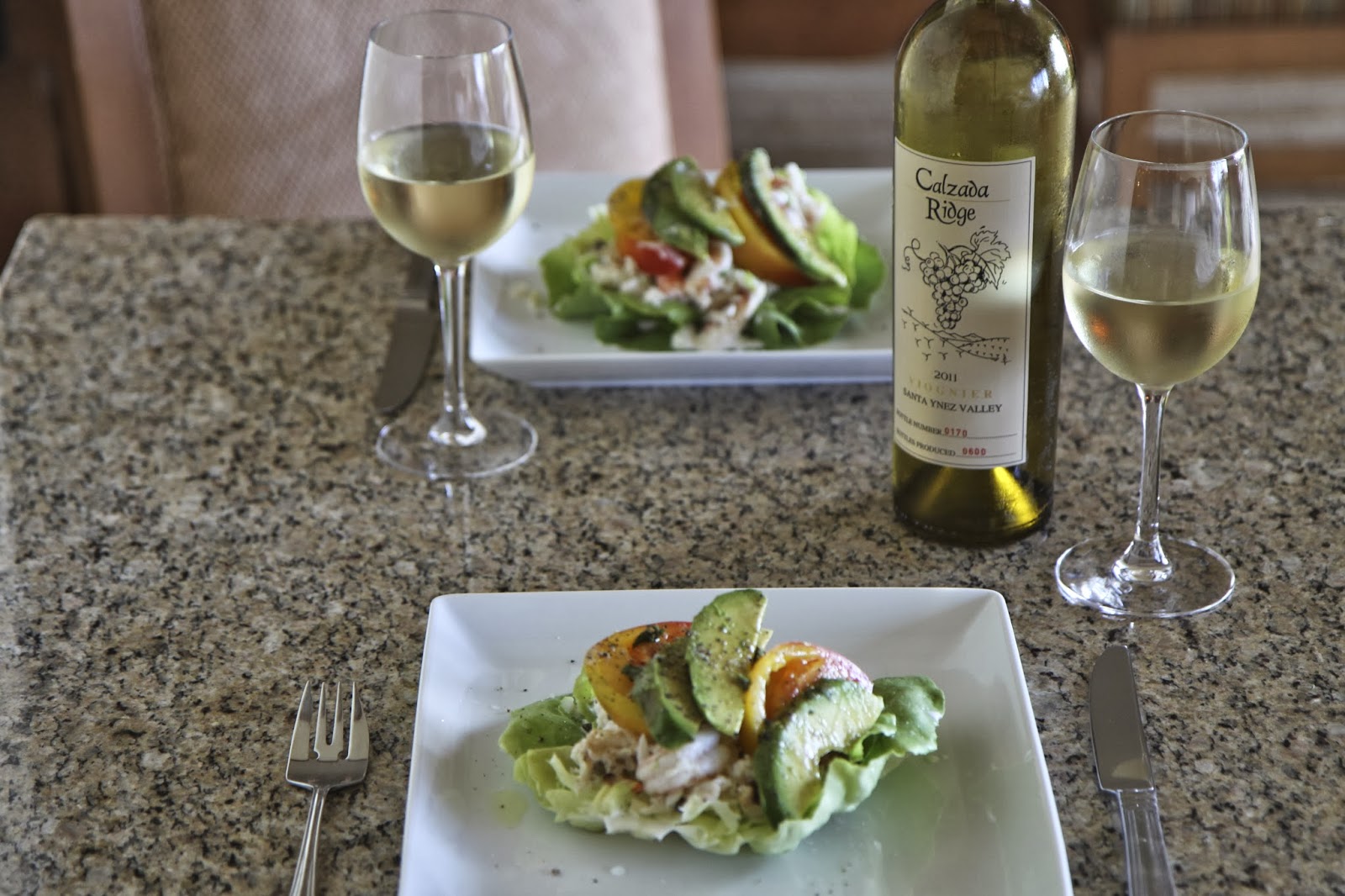 Ingredients for two salads:
Butter lettuce or any greens that you desire
8 large shrimp or prawns (check for sustainability—see link above)
1 pint Dungeness crab lump meat
1 grapefruit parted into sections with membrane removed
1 ripe avocado
1 ripe tomato (we were lucky to have a yellow heirloom)

3. Peel grapefruit and cut into slices, cutting inside the membrane so that the fruit is exposed.
To see a demonstration video of this technique click here.

4. Place shrimp and crab together in a small bowl. Dress as desired, about 1/2 cup. Toss lightly being careful not to breakup the shellfish.

6.  To compose salads: place three to four lettuce leaves on each salad plate. Divide crab and shrimp mixture evenly atop the lettuce leaves on the two plates. Top the salad as demonstrated in the photo below with grapefruit sections drizzled with a little more vinaigrette placed on the seafood mixture. The final layer is made by alternating slices of avocado and tomato. Drizzle with olive oil, salt and pepper. 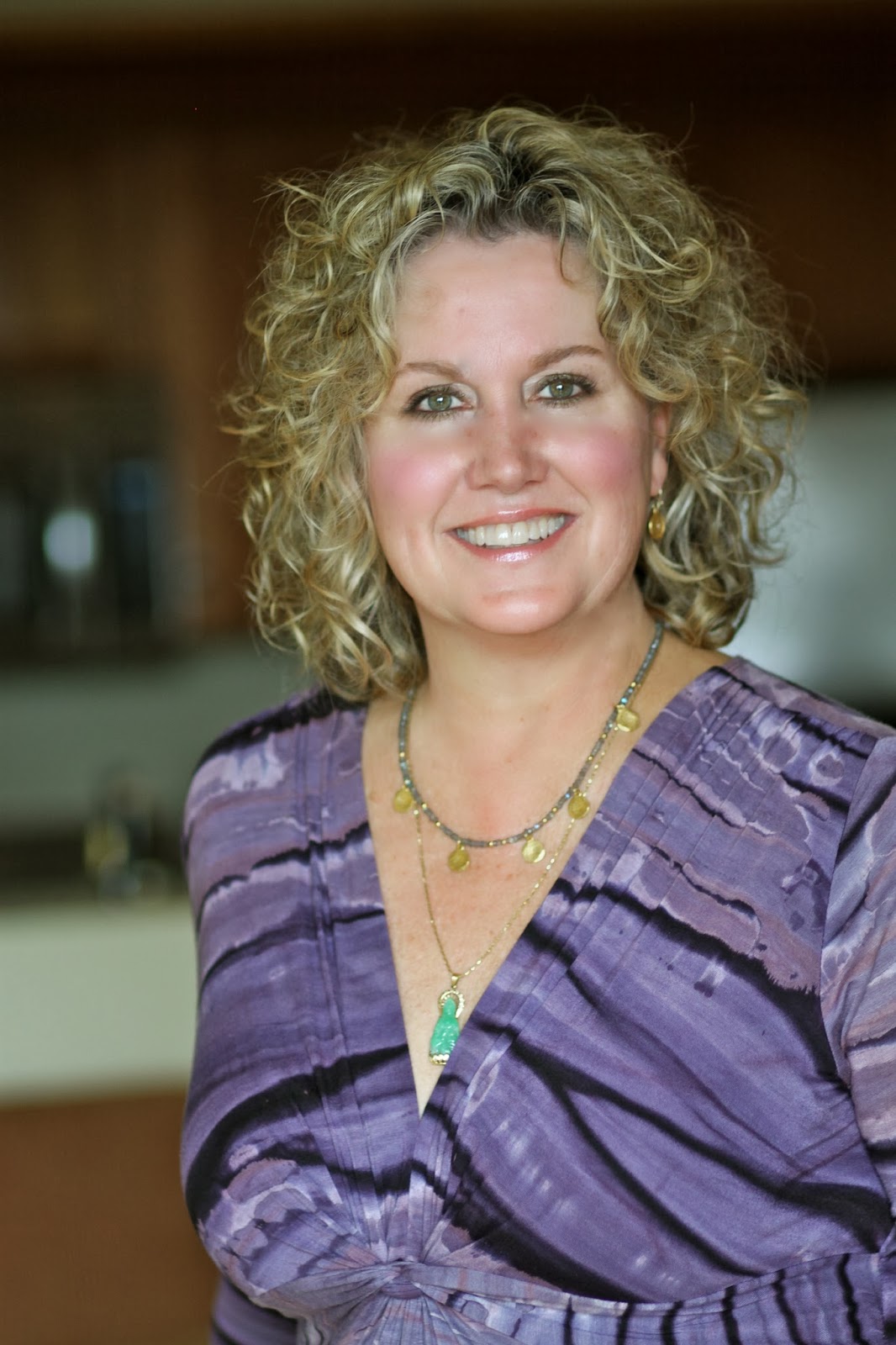 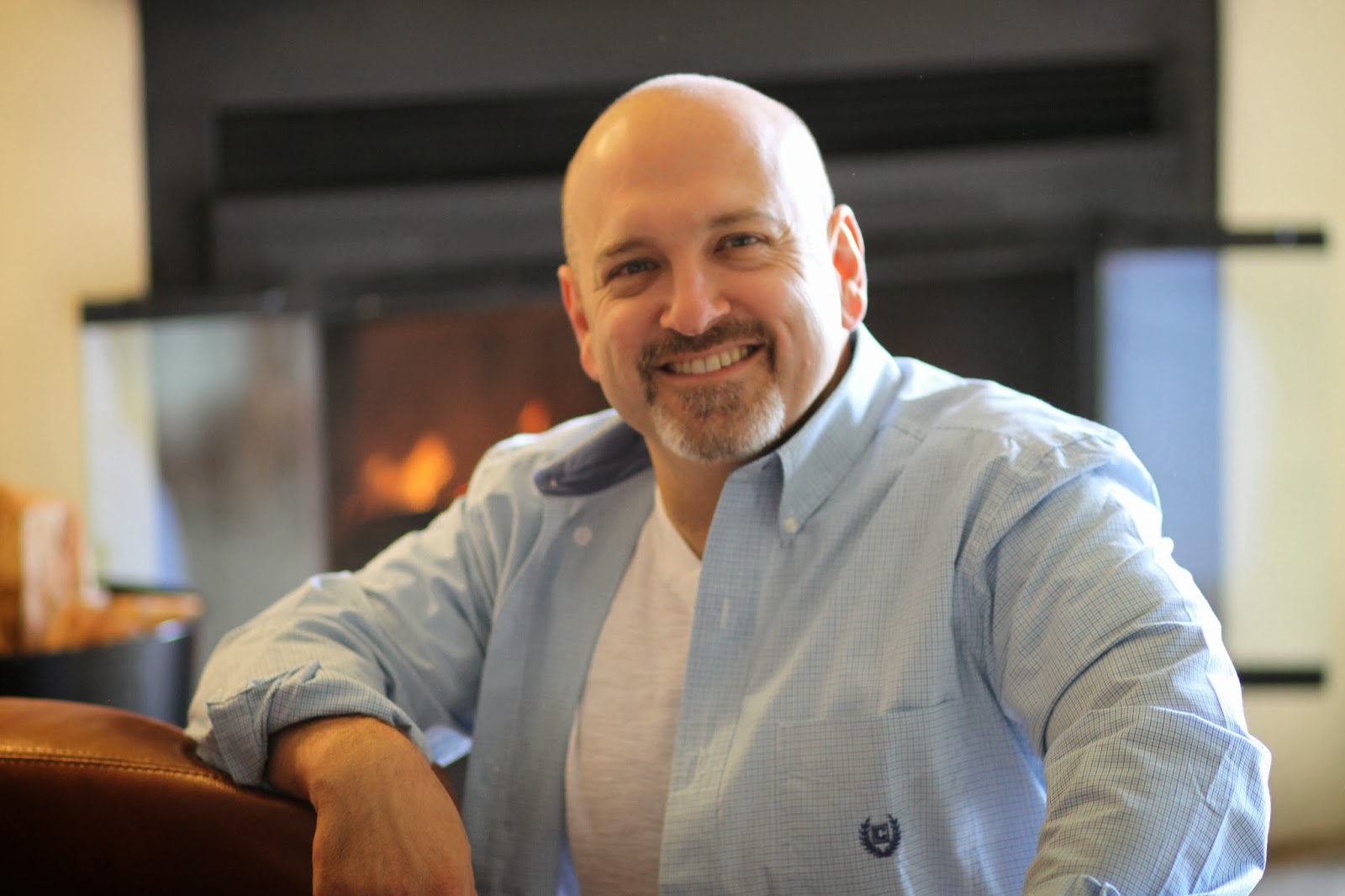 Posted by Salvation Sisters at 3:34 AM