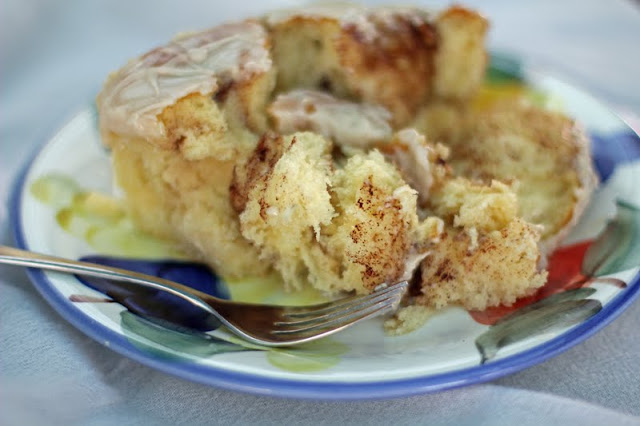 "Serendipity is the art of making an unsought finding."
~Pek van Andel

Some things are meant to be. I know that in my heart of hearts. I believe that the story of how I met our cousin, Syd, serves as an example of how strange and wonderful things happen around us every single day. We need only to pay attention, ask the right questions, and magical things can happen.
In 1987 I met a woman introduced to me as Syd when I started working at The Ballard Inn in the Santa Ynez Valley. I had been hired as the “chef” at the inn, preparing breakfast in the mornings, and high tea in the late afternoon for the guests. Syd served breakfast in the dining room a few days a week for this small and exclusive bed and breakfast which was just a block from her house in the quaint town of Ballard.﻿﻿

Syd and I worked together for quite some time, completely unaware that there was any connection between us. In time I came to appreciate her sense of humor and intelligence. I was further intrigued when I found out that Syd was a talented artist, with a completely original style and point of view. I sensed that she was entirely her own person, authentically herself, and I grew to like and respect her. Syd, for her part, happily munched on my creations, reported any rave reviews about my food from the dining room, and we happily talked about this and that. We gradually got to know one another and our friendship grew.﻿

As I remember it, one afternoon we got to chatting in the kitchen about our childhoods and where we grew up as people will do who decide that they do indeed like one another, and may as well invest the time and energy it takes in getting to know more about one another's lives. I just happened to mention to her that I had fond memories of spending time with my maternal grandparents, Earl and Maxine during the summers in Redlands, California. ﻿﻿
Syd surprised me by saying that she had spent time in the summer in Redlands, also, and that she had family from there. I was surprised because I had not encountered many people living in the Central Coast who knew where Redlands was located on a map. I usually had to explain that it was 50 miles from Palm Springs as a means of giving it a place in the geography of California that people could relate to. With the revelation that we shared a history in this location, we looked at each other with puzzled interest. I, just for grins, asked her the name of her family in Redlands. She answered Wilkins. I was taken aback, since that was the maiden surname of my maternal great-grandmother, Maude. I recall that I spluttered out that Wilkins was a family name for me, too, but that all of the Wilkins were a long time dead. ﻿

Syd and I stared at each other with eyes widening... growing more incredulous by the minute. She told me she was going to go and give her dad, Bert, a call. Bert and Syd's mother, Margaret, lived in Ballard, also, across the street from Syd and her family. In a burst of inspiration I told her to ask him if the name Igo meant anything to him as she was flying down the hallway in her excitement. In a few minutes Syd burst back to the kitchen to give me a message from her Dad. He said, "Stay put, I am coming over there."﻿﻿

"As the world turns", as we sisters like to say, Syd’s mother, Margaret, and my grandmother, Maxine, who were both still alive at the time, were first cousins who had lost touch with each other years before. Neither had any idea that their progeny were living in close proximity, in fact working together, in a small town in the Central Coast of California, far from their Redlands roots. The next thing I knew I was I was meeting Bert, who was white-haired, wiry and a practical joker with a wicked smile. ﻿
He brought with him a very old photo album tucked under his arm. Bert put the album down on the kitchen counter and started turning the pages, stopping at a photo of a very large family gathering. Bert asked me if I recognized anyone. To my amazement, there was my Papa, Earl, with his arm around another man in the front row of the photo. I pointed and said, "That's my grandfather, but I don't know who that is that he has his arm around." Bert smiled widely and said simply, "That's me." You could have knocked me over with a feather. Not only was that my grandfather in the photo with Bert, but I was able to pick out my grandmother, her sister, my great grandparents, and my great-grandmother's sisters. Bert, Syd and I stood misty-eyed and stunned silence...we were having a family reunion. We figured out in the end, that my great-great-grandfather, and Syd's great-great-great-grandfather had been brothers.


Over the next few weeks we met each other's families. I met Syd's brother, Nate, Syd's mom, husband and two girls. Syd in turn, was introduced to my husband and twin boys, my sister Juliette, also an artist, and Juliette's son, Paul. Syd and Juliette discovered in very short order that they had a whole lot in common, and for a brief happy time in our lives, not too long after they met, Syd and Juliette decided to split the rent on a vacant shop across the street from my house on Elm Street in Solvang to use as a workshop/art studio. Juliette had a sign making business at the time, and Syd's business, Sheep Floozy continues to thrive. Juliette worked on her sign commissions, and Syd painted furniture with bright, wonderful colors and her designs which she sold at a shop in downtown Solvang. I used to love to go across the street and sit on the crushed red velvet couch that they had installed in the corner of the large space, and watch them work while we talked and laughed.
Margaret, Bert, Maxine and Earl all have both been gone many years now, but they did meet again before my grandmother died shortly thereafter. I fondly remember their reunion with them sharing some stories and a good laugh over the old days. They all were very pleased that the family had found its way back together again.﻿﻿

All of this happened almost 25 years ago, although of course, it seems like only yesterday to me. Our children grew up and both Syd, and Juliette have become grandmothers. I would like to be a grandmother, too, but so far my son, Jordan, is not cooperating. We are now spread out by distance since Juliette and I both moved far from our home in the Santa Ynez Valley, but we still stay in touch with Syd and keep track of each other's families through the wonders of the social network. Both of Syd's daughters are artists like their mom, and one has a shop on Etsy.
We remain grateful that we found each other, and to this very day, I know we all feel lucky to have discovered the secret we had in common. It seems just as likely that Syd and I could have worked together for the time we did and never have discovered that we were long lost relatives. This story anyway, had a happy ending, and I am especially fond of those. 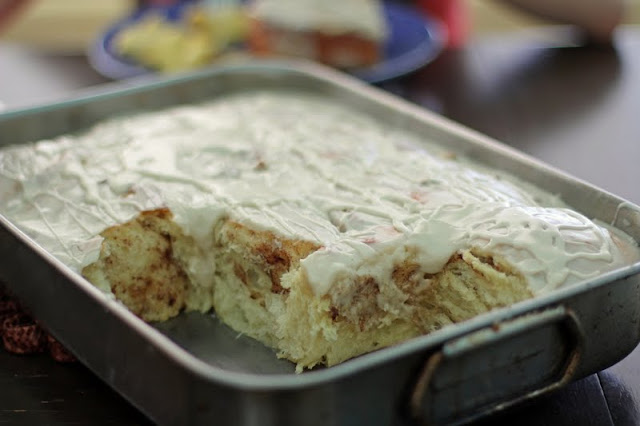 This is a recipe that I made every morning at The Ballard Inn. A hot tray of cinnamon rolls slathered in gooey icing on the breakfast buffet is enough to make diners almost swoon, as I have witnessed many times in my baking career.
The trouble in general with cinnamon rolls though, is that they are a yeast dough and, of course, need time to rise... so making them can be an onerous chore for the baker who has to rise before the sun to be able to get them on a breakfast table when it is still the breakfast hour. This recipe became my solution to that problem.
One needs to simply make the dough the night before, and let it do the first rise overnight in the refrigerator. The next morning, pull the dough out of the fridge, remove it from the bowl, and allow to sit our for 15 minutes on your cutting board before rolling out the dough. After the rolls are prepared and fitted into a baking pan, they are ready for the last rise before being baked off in the oven. This second rising time allows the baker to enjoy a leisurely cup of coffee, and make other breakfast preparations if desired. Easy! 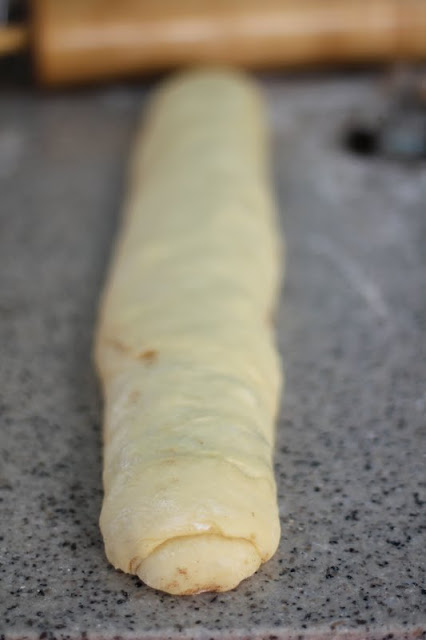 Procedure:
1. Line a 13x18-inch baking pan with wax or parchment paper. Coat with spray oil and set aside. Alternatively, you can also oil a big salad bowl that is large enough for the dough to double in size as it rises.
2. In a 1-cup Pyrex, combine the hot water with the sugar and the yeast. Stir and set aside for about 10 minutes, until the mixture is foamy. 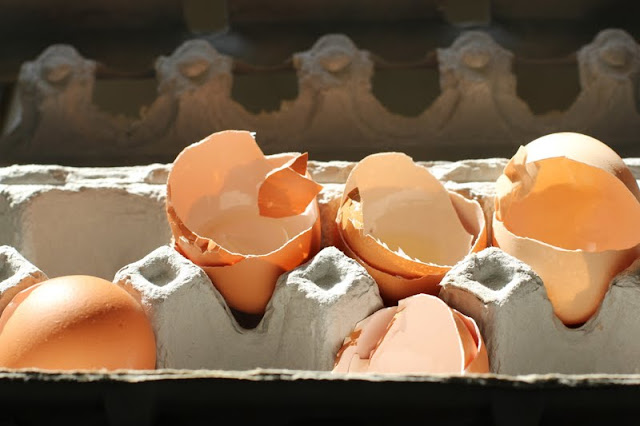 3. In the bowl of a KitchenAid mixer with the whisk attachment, mix together the eggs, oil and milk. Add yeast, mix again.
4. In a bowl, combine the flour, sugar and salt. Replace the whisk attachment with the dough hook. Add the dry ingredients to the wet ingredients and stir until completely blended, about 2 to 3 minutes. The dough will be soft and sticky. Turn the dough out onto a floured board and knead until the dough just holds it shape, 2 to 3 minutes. Transfer the dough to the prepared pan, lightly mist the surface with oil, cover tightly with plastic wrap and place in the refrigerator overnight.
5. In the morning, remove the dough from the refrigerator, and let stand at room temperature for about 15 to 20 minutes until slightly softened. 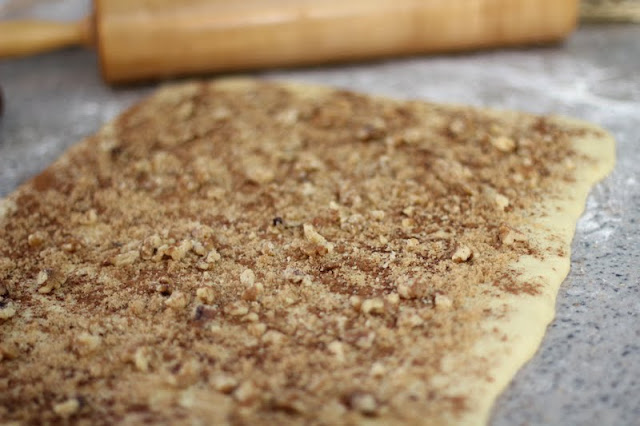 6. Lightly dust a work surface with flour. Invert dough, remove wax paper and discard. Roll out the the dough into a 16-inch by 12-inch rectangle. Brush generously with melted butter and sprinkle evenly with cinnamon and brown sugar. Top with nuts and raisins, if using.

7. Roll up lengthwise into a cylinder. Cut the log in half. Cut each half in half to yield 4 smaller cylinders. Cut each quarter into 3 slices. Place rolls, cut side down and loosely touching each other, into a pan or pans that have been brushed with butter. (I use one large pan that measures 10-1/2" x 14-3/4" x 2-1/2".) Brush the tops of the rolls with melted butter and cover with plastic wrap.


8. Preheat oven to 375°F. Set the prepared rolls in a warm spot and let rise for 30 to 60 minutes until double in size. Remove plastic wrap and put rolls in oven. Immediately reduce temperature to 350°F and bake uncovered for approximately 30 minutes. While the rolls are baking, prepare the glaze.


9. To make the glaze, whisk together the powdered sugar, milk, vanilla and lemon extracts. Thin with additional milk if necessary for a pourable consistency. When the rolls are finished baking, remove from oven to cool on a rack. Generously coat the rolls with 2/3 of the powdered sugar glaze. After 15 minutes, drizzle the remaining frosting. Serve immediately or let cool in pan. Yields: 12 large rolls. 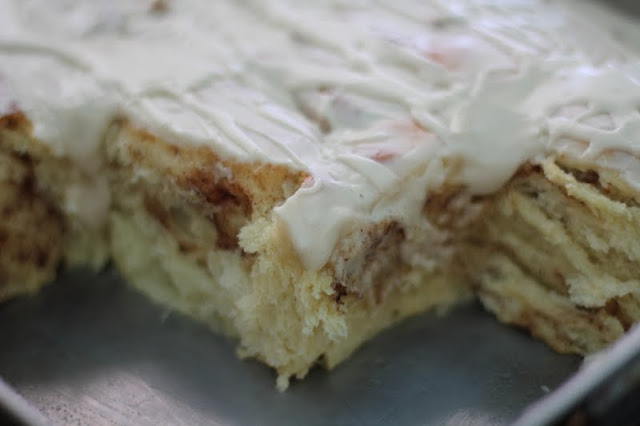 Posted by Salvation Sisters at 11:19 AM