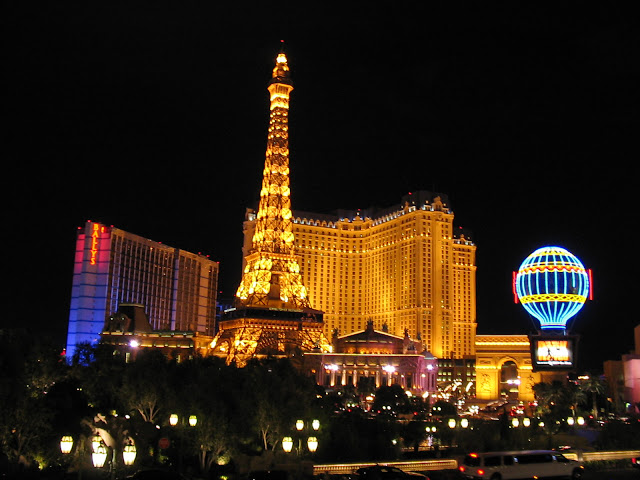 Dearest Sisters,
Over stimulated Michelle writing to say hello from the oddest place on earth. This is how I started off my morning... by stepping off the elevator to encounter the skinny, sagging ass of a 60-something gentleman, perhaps European, who was outfitted in a Speedo (aka banana sling) and a short shirt, which did not leave anything to the imagination in the nether region.
I was instantly reminded of that hilarious episode of Sex In The City where Samantha thinks she can talk herself into a relationship with a super-rich elderly man until one night she sees his naked wrinkled "gluteous minimus" moving towards the bathroom, and in that one crucial moment, she knows the relationship is ding-dong over.
I had to follow "no pants man" all the way down to Starbucks - where I put on the brakes and he thankfully walked quickly on, eventually out of sight, but not out of my head. I was indeed very grateful that I did not have to stand behind him to wait ten minutes for coffee, eyes fixed on the unspeakable. It's just difficult to comprehend that he was completely comfortable marching his saggy butt and thinly disguised you-know-what through the casino, the very llloooonnnnngggg MGM shop walk, descending the stairs to the beginning of the conference center, and then finally through the double doors on down to the pool where he could horrify other sunbathers and repell the wait staff. Hope he's a big tipper, but I sincerely doubt it. I hope not to be scarred for life by that horrifying visual. 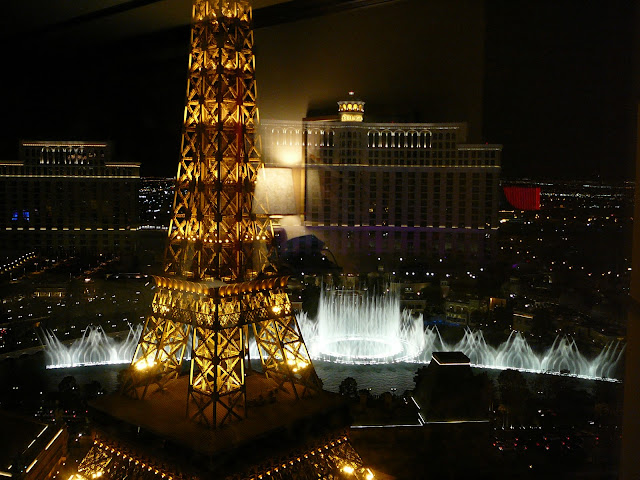 I am now sitting in my hotel room on the 16th floor, with a strip view, basking in the silence. No ring-a-ding-ding from the slot machines, no blaring music, no talking, no yelling, no nothing. No cigarette smoke or cigar smoke. Definitely no banana slings. No boobs, except for my own. Just peace and quiet for another two hours until I meet the team for a cocktail before heading to dinner at a fancy Italian restaurant and then on to see KÀ.
I had the good fortune of seeing Le RÊVE. Upon leaving the theater, a co-worker said, "That was freakin' awesome, but what the heck did it mean?" Love it. I felt like Linda as I explained to him the hidden meanings in the metaphore of virginity dispatched, archetypal figures, the hero's journey and the power of myth à la Joseph Campbell. I bored him into another cocktail.
﻿
The show was quite wonderful. I enjoyed a $14 glass of Chardonay during the show. I will note that it was served in a plastic cup. Only in Vegas will one be charged $14 for wine in a ***small*** plastic cup. Since we could not grab dinner before the 9:30 show, we went to Wolfgang Puck at midnight. The Boss, who was starving, proceeded to order four sets of appetizers for everyone to share and then went on to chow down two-thirds of a huge plate of meatloaf and mashed potatoes. He reported the next day that he regretted the meatloaf for the rest of the "morning". I was more sensible (for once) and ordered Wolfgang's famous Chinois Chinese Chicken Salad, which was short on chicken, ate half, and was in bed at exactly 1:30 and asleep by 1:32.
After tonight's Cirque du Soleil show, I believe I will have seen every show in Vegas with the exception of LOVE - The Beatles extravaganza. Oh yeah, and the Viva ELVIS show. Something to look forward to experiencing one of these days.
We needed to hold a company meeting today and the only quiet option was renting a cabana at the pool for $300. A little peace and quiet with abundant fresh air, some sunshine, and the muddled sounds of jet airplanes landing and departing at the airport nearby: Priceless. ﻿

I saw Mitt Romney speak at the opening General Session. Linda would have loved him. I thought about getting an autographed photo as an early birthday present for her, but the opportunity didn't present itself. I am totally bummed. Now I'm not sure what to do for a present. I suppose it will have to be something "lame" from NapaStyle. How exactly does one cut sarcasm with a knife?
The gang went to Diego last night for dinner. Their tagline is "SexMex". Not a joke. While I didn't see too much sex in the establishment - by Vegas standards - the food was quite wonderful. I enjoyed a really lovely shrimp cocktail made "tableside" with rock shrimp that were tossed in a cocktail shaker with lemon-chile sorbet and some other goodies - although I could have done without the pepitas. The margarita was pretty rockin' as well as the guacamole that was prepared tableside. The Boss gave me a bite of his incredible steak. It was so big he could give a sampling to the other four people at the table and still have plenty for himself. Crazy.﻿

The Chinese restaurant's tagline is Yin Yang Yum. I wish I had thought of that first for a blog title. Love the tagline, but we opted instead for Japanese on Sunday night. Pretty frickin' awesome Japanese food - that is - at Shibuya. I broke my rule about not eating raw fish. If you are going to break a self imposed rule, one might as well do that in Sin City. The Yellowtail was amazing or more appropriately: sinsational. The spicy tuna was yin yang yum. We also had sushi made from pork. Sounds weird, but oh man there was some raving going on at the table.
I saw a guy last night wearing, what looked like, a long duster made from alligator. His girl had big, big boobies. They looked good together. I will leave that open to interpretation.
I am looking forward to a "sistercation" in April. I'm glad that we will be staying in the center of the strip. I have been advised by several people to check out The Cosmopolitan and The Aria. I have to say that window shopping in Vegas is quite unique. Every designer is here and it is fun to take a look. There is a clothing shop here in the MGM where the styles are not good for me, but the clothes are wildly inventive and the coats are fantastic. It's big cha-ching. Who can afford such expensive items? It's always such a wonder especially during these difficult economic times.﻿

At noon, I had a big beef sandwich laced with horseradish from 'Wichcraft and I'm getting hungry already. Why's that? It's a sad state of affairs. Feeding the pie hole all the time here in Vegas. I think I might have a banana in my purse that I didn't eat at breakfast. It can hold me over until dinner. I'm having a difficult time eating the banana so shortly after the now infamous banana sling incident.
You know, I have to say, I eat my fair share of Shrimp Cocktails when in Las Vegas and lately I've been very disappointed by the offerings. For example, lets examine the $18 plate of ridiculousness at Michael Mina's Nob Hill Tavern. Six small shrimp with a dab of cocktail sauce. I can buy a mongo bag of large shrimp at Costco for $18.00. Chef, if you are going to tag me for $18, please showcase jumbo shrimp for a wow factor. At least make me feel as if I paid for something a little special.
As much as I rag on Vegas, I am having fun. It's just a weird, weird, weird place to visit. Really, I think one can see just about anything here is this odd alternate universe fueled by sex, alcohol, drugs and gambling.
I'm glad to be packing up tomorrow and heading home - although I don't arrive in Tucson until about 10 pm. I will definitely enjoy sleeping in my own bed tomorrow night, stale smoke emitting from my hair delicately perfuming the pillow. Nice.

In crab season, I like to make fresh crab and shrimp cocktails. In stemless martini glasses, I like to fill the bowl two-thirds with a salad comprised of slivered iceburg lettuce combined with minced celery, shredded carrot, pickled shallots, and diced avacado. Spoon on a tablespoon or two of cocktail sauce. Mound fresh lump crabmeat on top of the cocktail sauce. Hang the shrimp from the rim or propped against the perimeter of the glass for an artful presentation. Garnish with a wedge or two of lemon. Serve with additional cocktail sauce on the side in individual dishes so guests can feel free to "double dip".
When buying horseradish sauce, I head to the refrigerated section of the grocery store and buy the preparation with the fewest ingredients. Bubbies is a great choice.
The pickling spice used in the recipe give the shrimp a super fresh, clean flavor. The shrimp can be cooked ahead of time, quickly cooled and then chilled until ready to serve, a minimum of a few hours, but no longer than a day. You'll definitely want to eat the shrimp on the same day that they are cooked.
﻿
Ingredients:
5 "21-25 count" shrimp per person, fresh or frozen
brine
2-3 Tbsps pickling spice, optional
2 bay leaves, optional
lemon wedges, seeds removed 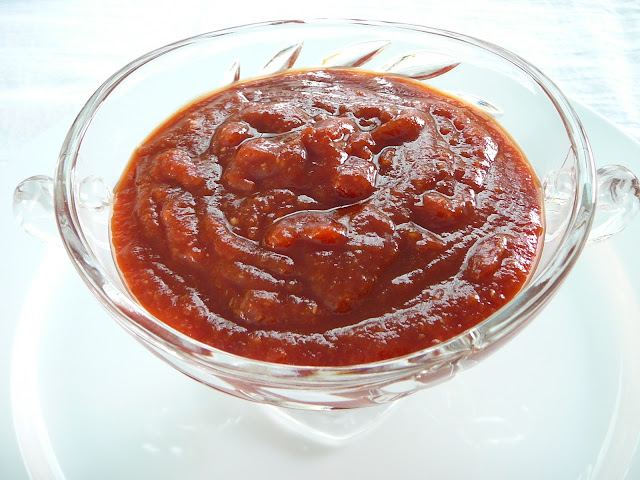 1. For the cocktail sauce:  Combine all the ingredients together. Taste. Add more horseradish or Tabasco to suit your palate. Refrigerate and serve. The sauce will keep well up to a week in the refrigerator. 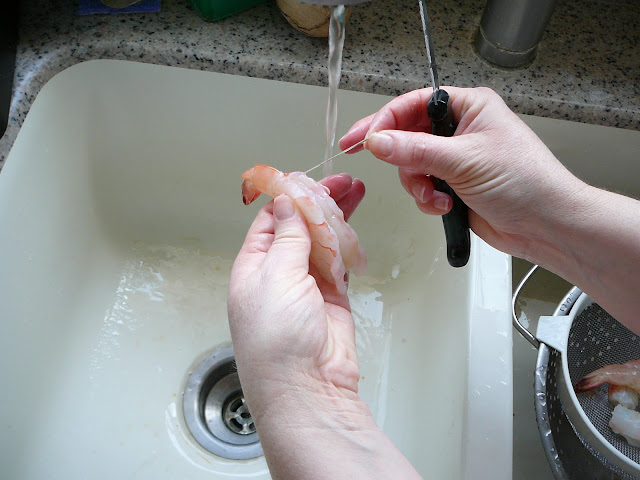 ﻿﻿3. To boil shrimp: Bring 8 quarts of water to a boil. Add 2 tablespoons of pickling spice to a mesh tea ball, close securely, drop in the water, add 2 bay leaves and boil for 10 minutes. Near the kitchen sink, prepare a large bowl of ice water. Drain the shrimp and discard the brine. Add the shrimp to the boiling water and stir frequently. The shrimp will cook quickly so keep an eye on them. As soon as the shrimp begin to curl and turn pink, about 2 minutes, the little guys are done. Drain the shrimp, using a colander and quickly transfer to the ice water. After 2 to 3 minutes, drain the shrimp again and chill until serving time. 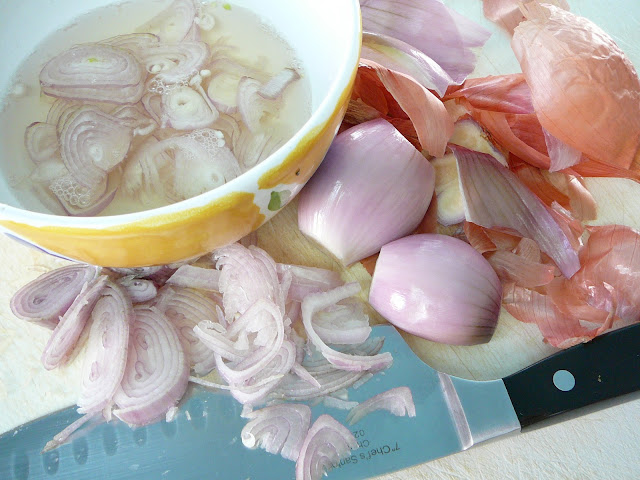 4. To a pickle shallots: Remove the papery husk from 1 to 2 shallots. Slice the shallot into thin rings and transfer to a smallish bowl. Add mild vinegar to cover, such as Sherry, Champagne, or white wine, to cover. Stir every once in awhile and let marinate for about an hour. 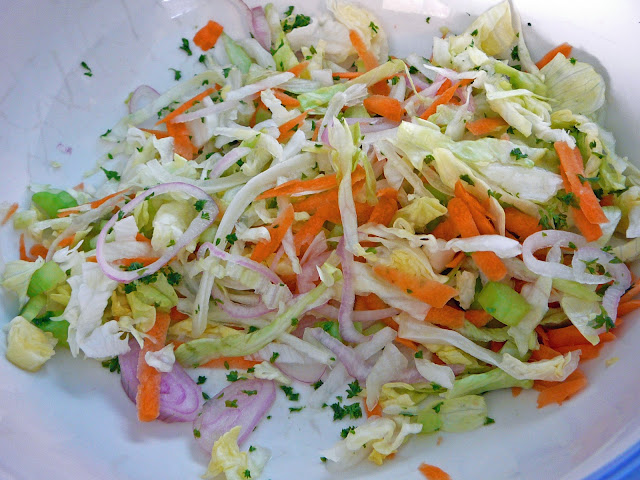 5. To make the salad: In a medium bowl combine thinly shredded Iceburg lettuce, shredded carrot and minced parsely. Just before serving, toss in some marinated shallot rings and carefully fold in the diced avocado.
6. Artfully present the shrimp in individual plates, cups or glasses, with or without the salad, and cocktail sauce served on the side for dipping.
﻿﻿

Posted by Salvation Sisters at 8:16 PM

Email ThisBlogThis!Share to TwitterShare to FacebookShare to Pinterest
Labels: Appetizer, My Traveling Tales by Michelle, Shellfish