The Spices of Life and Chicken Tikka Masala

As my knowledge started to grow about the supplements that we carried on our shelves at the store, I had the epiphany that most of the ones that were the most effective for me and our customers came from plants. It just makes sense doesn't it? If a humans or animals didn't need plants, we could all just eat dirt, right? Plants transform minerals in their bodies and create the pigments that are rich in phytonutrients, healthy fats, that living beings can assimilate in order to create vibrant health.
What I further discovered is that the most ancient cuisines have always known and recognized this. It seems obvious to me why these cuisines have wonderful and protective herbs as the base for their delicious dishes. Our ancient ancestors it seems had knowledge that onions, garlic, ginger, parsley, cilantro, chiles, turmeric, rosemary, cinnamon, oregano, thyme, mint, fenugreek, coriander, cumin, lemongrass, galangal, and the list goes on and on, were not only the flavor components of so many delicious dishes, but that they are vital for health. Herbs not only give the mouth a tantalizing flavor profile, but they protect specific organ systems in addition to acting as vital antioxidants for the entire body. Many herbs have antiviral and antibacterial properties as well. Asian cuisines, especially Indian food is a great example of the use of these herbs.

San Jose, California is truly a cultural melting pot. When I moved there in 2001 and started working for Whole Foods Market, I for the first time in my life, found myself exposed to an environment that was in a word, multicultural. The Bay Area abounds with people from everywhere on the planet in addition to eateries serving cuisines from all over the world. I was in daily contact with people from different cultures. In my own store, with its overwhelming abundance of spices and herbs from around the world, amazing fruits and vegetables, and natural products of every kind, I started to try cooking dishes that I was introduced to by new friends, and even men that I dated, being unattached romantically for the first time in a very long time. 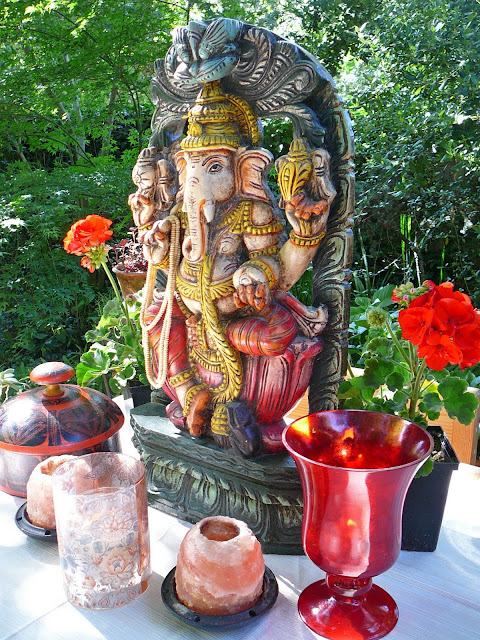 One such relationship introduced me to the joys of cooking Indian food at home. I met a younger, exotic and very handsome man who introduced himself to me on the supplement aisle when I was working one day, and he asked me out. His family had come to the United States when he was just 13 from the Punjab region in Northern India. His family was a blend of Sikh and Hindu heritage, and his version of remaining true to his different dietary dictates that conflicted between the two religions on the subject of eating meat, was to be vegetarian on Tuesday and Thursdays, to appease his Hindu mother. Then he would allow himself to eat meat the rest of the week which was in keeping with his days growing up in the Punjab, where meat is a part of the traditional diet and was eaten by his father.
During the two years that we spent time together off and on, we discovered that we loved to cook together. We spent many pleasant evenings listening to his favorite music from India and he tutored me in the art of making Paneer (cheese from cow's milk) for Palak Paneer, to cook a spicy cauliflower curry, and to grill up a tantalizing Tandoori chicken. He also taught me how to make my own chapati which are called roti where he was from. From him I learned the great trick of chewing on a cardamom pod after dinner to freshen the breath and help as a digestive.
In the end it turned out that he had been less than truthful about his marital status, and was in fact still in an arranged marriage that he previously had assured me was long over, and we parted ways, leaving me much the wiser about other aspects of Indian culture.
A couple of weeks ago, Michelle and I were craving Indian food, so we whipped up a feast of Chicken Tikka Masala, Palak Paneer (using paneer we made earlier in the day) and we made homemade roti. The house was filled with the heady aromas of garlic, onions and ginger cooking with garam malsala and other spices. We happily dined al fresco on a beautiful evening in Sonoma county under the ancient oak and very old Gravenstein apple tree that shade my deck. A carved statue of the elephant god Ganesha presided at the head of the table as we enjoyed the meal with a wonderful Sauvignon Blanc that was made from grapes grown just down the road.
Michelle and I made a comic toast to the Punjabi bad-boy who had taught me how to make such wonderful and nourishing food. We bowed our heads like the generations who have gone before us, and gave thanks for the abundance of food shared with family. And in my heart, I gave silent thanks for the partaking of herbs that share their earth magic and blessings to all who seek and eat. I also gave a thankful wink and a nod to cultural diversity. 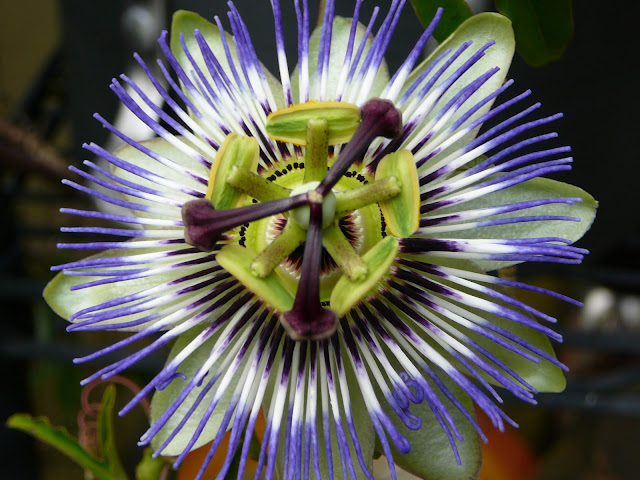 Chicken Tikka Masala is a wonderful make ahead meal. Interestingly, it is the most ordered restaurant dish in Britain. Store in the refrigerator for up to three days and reheat gently before serving. It also freezes well, so we always double the recipe and freeze half. Grilling the chicken over a charcoal fire lends a pleasing smoky flavor to the finished dish. We like to serve the Chicken Tikka Masala with Palak Paneer and roti to soak up the delectable "gravy". The Masala would also be delicious served over basmati rice. This recipe is based upon Grace Parisi's, James Beard Award-Nominated author and Senior Test Kitchen Associate for Food & Wine magazine. 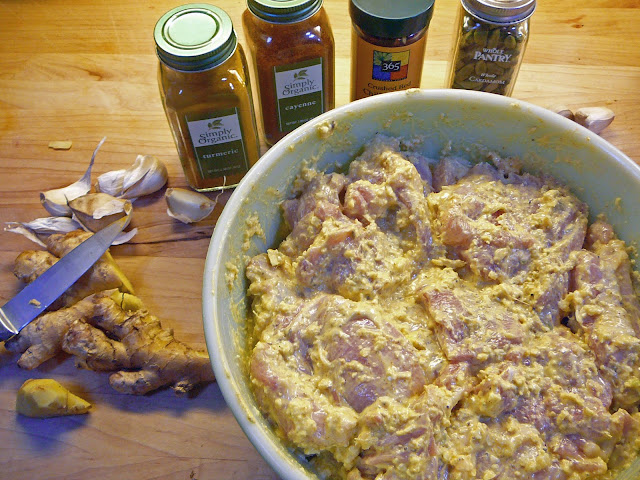 For the sauce:
2 Tbsps plus 1 tsp of ghee or oil
1/4 cup blanched whole almonds 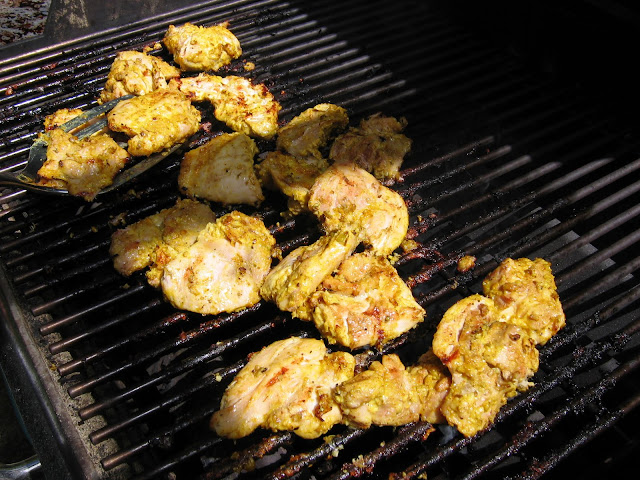 Procedure:
1. To make the marinade: In a large glass or stainless steel bowl, combine the yogurt, garlic, ginger, cumin, coriander, cardamom, cayenne and turmeric. Season with salt and pepper. Add the chicken to the marinade, turn to coat, and refrigerate overnight.
2. Prepare to grill over a charcoal fire: Instead of using lighter fluid, we prefer employing a charcoal chimney to light the coals. When the coals are ready, after about 20-30 minutes, remove the grate and dump the coals into a pile on the side of the grill. Replace grate. Place the marinated chicken in the middle of the grill, turning as needed, until cooked through, about 15-20 minutes. Alternatively, cook the chicken on a gas grill, or in the oven under the broiler (about 8-inches from the heat), turning once or twice, until cooked through, about 12-15 minutes. 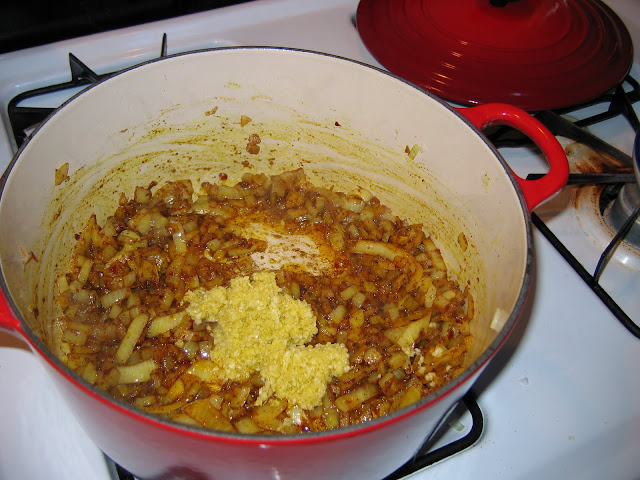 3. Transfer the chicken to a cutting board and cut each thigh into large bite-size pieces.
4. In a small skillet, heat 1 teaspoon of ghee or oil. Add the almonds and cook over medium heat, stirring constantly, until golden, about 5 minutes. Transfer the almonds to a plate and let cool completely. In a food processor, pulse the almonds until finely ground.
5. In a large enameled cast-iron pot, such as a La Creuset, heat 2 tablespoons of ghee or oil until melted and hot. Add the onion, garlic and ginger and cook over medium heat, stirring occasionally, until tender and golden, about 8-10 minutes. Add the garam masala, chile powder and cayenne and cook, stirring, for 1-2 minutes. Add the diced tomatoes and juices, pinch sugar and season with salt and pepper. Cover partially and cook over medium heat, stirring occasionally, until the sauce is slightly thickened, about 20 minutes. Add the cream and ground almonds and cook over low heat, stirring occasionally, until thickened, about 10 minutes longer. Stir in the chicken; simmer gently for 10 minutes, stirring frequently, and serve. Yields: 4 servings 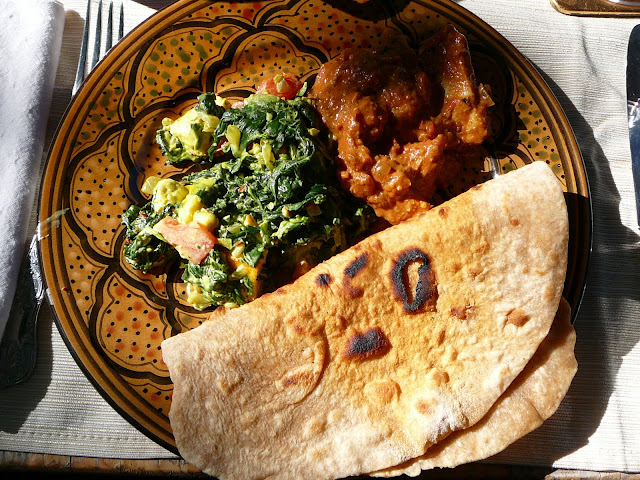