'Tis a lesson you should heed:
Try, try, try again.
If at first you don't succeed,
Try, try, try again. ~ William Edward Hickson
As anyone knows who has spent a good deal of time cooking, much of the process is about experimentation. The same is true for me with my diet.
When I try a recipe for the first time—often the subsequent times that I make it, I will choose alterations to improve the results. Such is the case with my previous Sugar-Free Coconut Hot Chocolate recipe that we published a couple of years ago, and such is the case with my ever changing thoughts on nutrition and diet to help me fight the battle of the bulge and stay healthy.
In January of 2012, armed with new knowledge and the moral support of my friend and co-worker at the time, Misty, of Healthy Transisitons, I embarked on a gluten-free Paleo template diet. In four months I had lost 50 pounds, and I wasn't even going to the gym.
That's the good news. Not only did I lose weight, but the life-long asthma that all of us sisters have struggled with since we were babies improved dramatically for me. In the fall of that year just a few months later, the Sistercation of 2012 occurred. This was when Juliette, Michelle and I met up here in Sonoma County for our annual sisters' get together. During the days we spent enjoying ourselves, we talked at length about diet and my going gluten-free while we weren't at the beach or having dance party and cocktail time in my backyard.

Juliette is an expert at making wild yeast and long fermentation sourdough. She owns the regionally-recognized bakery—Guadalupe Baking Company in Bisbee, Arizona. During our visit, Juliette argued that I should be able to include wild yeast sourdough in my diet because there is accumulating evidence that the long cold fermentation process literally eats up the gluten. I read a blog post on Cheeseslave that Juliette sent me that made me consider reintroducing this artisan product back into my diet. According to what I read, when tested, the gluten parts per million in wild yeast long ferment sourdough are below what the FDA requirement is to label a product gluten-free (however FDA regulations do not allow for anything containing wheat to be labeled "gluten-free"). Although I am not the master researcher that Michelle is, when I am on the track of new knowledge, I start digging into things. This is good and this is bad, because you can end up making yourself really confused, which I managed to do in this case.
Since I was still really missing bread on my new diet, I was persuaded to give baking my own artisan sourdough a try if it meant I could have delicious bread back in my life. Juliette had brought her sourdough starter dehydrated powder with her from Arizona, and she got the starter rehydrated and going for me here in California in the week she was at my house on vacation. When the girls were gone—with my new starter bubbling away—I set out to learn to make real sourdough. Not one to cautiously approach a new project, I enthusiastically threw myself into my new creative endeavor. I invested in brotforms, cambros, clay baking cloches, cast iron bread bakers, baguette pans, a lame, a good digital scale and a whole slew of other bread baking equipment that is needed to transform water, flour and salt into beautiful loaves of artisan sourdough.
Michelle got into the act, too, and it wasn't long before the two of us were turning out gorgeous and really delicious boules, baguettes, rolls, bagels and pizza dough under the tutelage of the expert, Juliette. There were many telephone calls and emails between the three of us that were devoted to the subject. Michelle even won a blue ribbon at her local state fair that spring for her heavenly Guava-Coconut-Orange-Walnut Stuffed Baguette. The following photos are examples of the bread and pizza that Michelle and I began making: 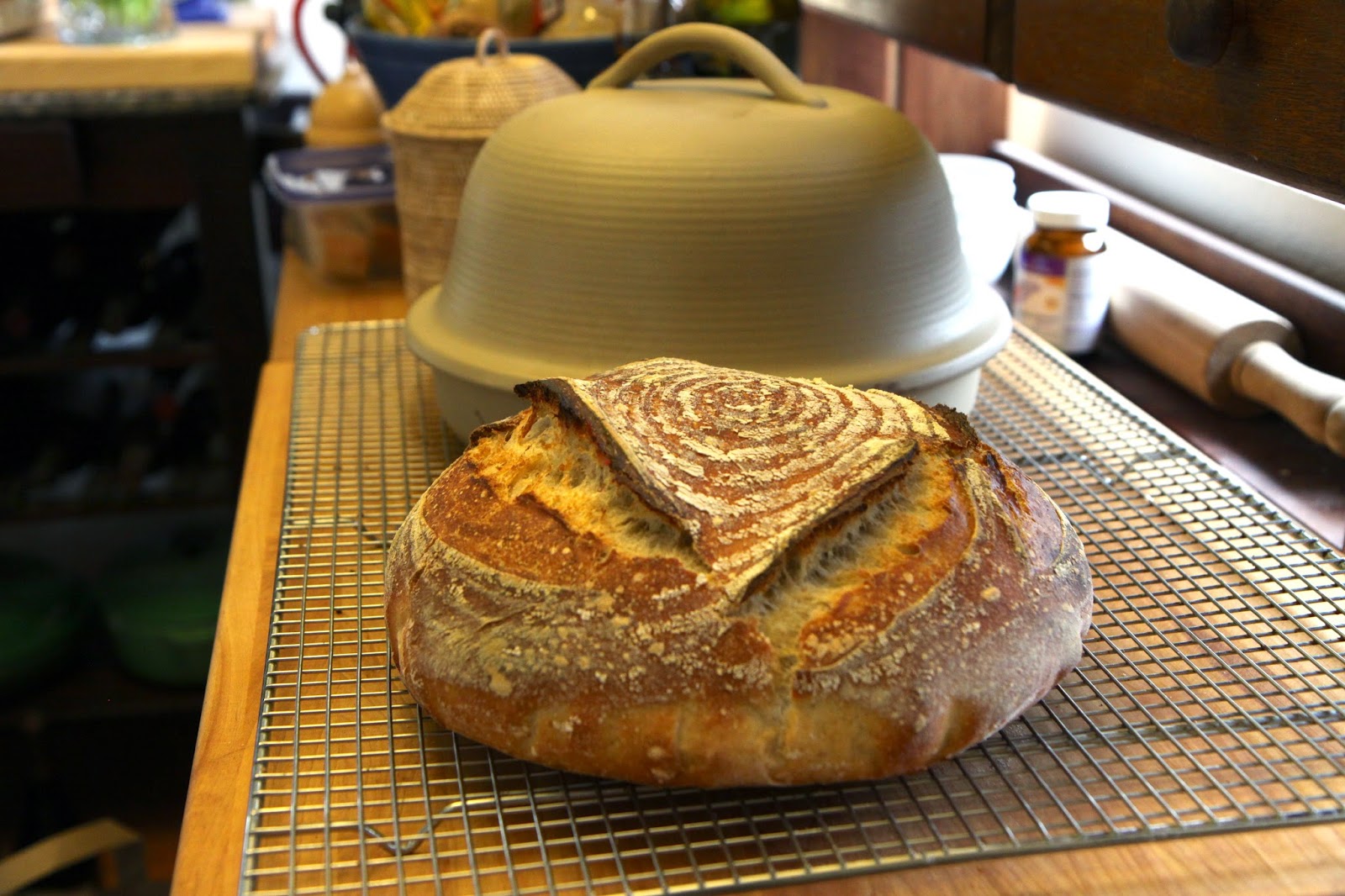 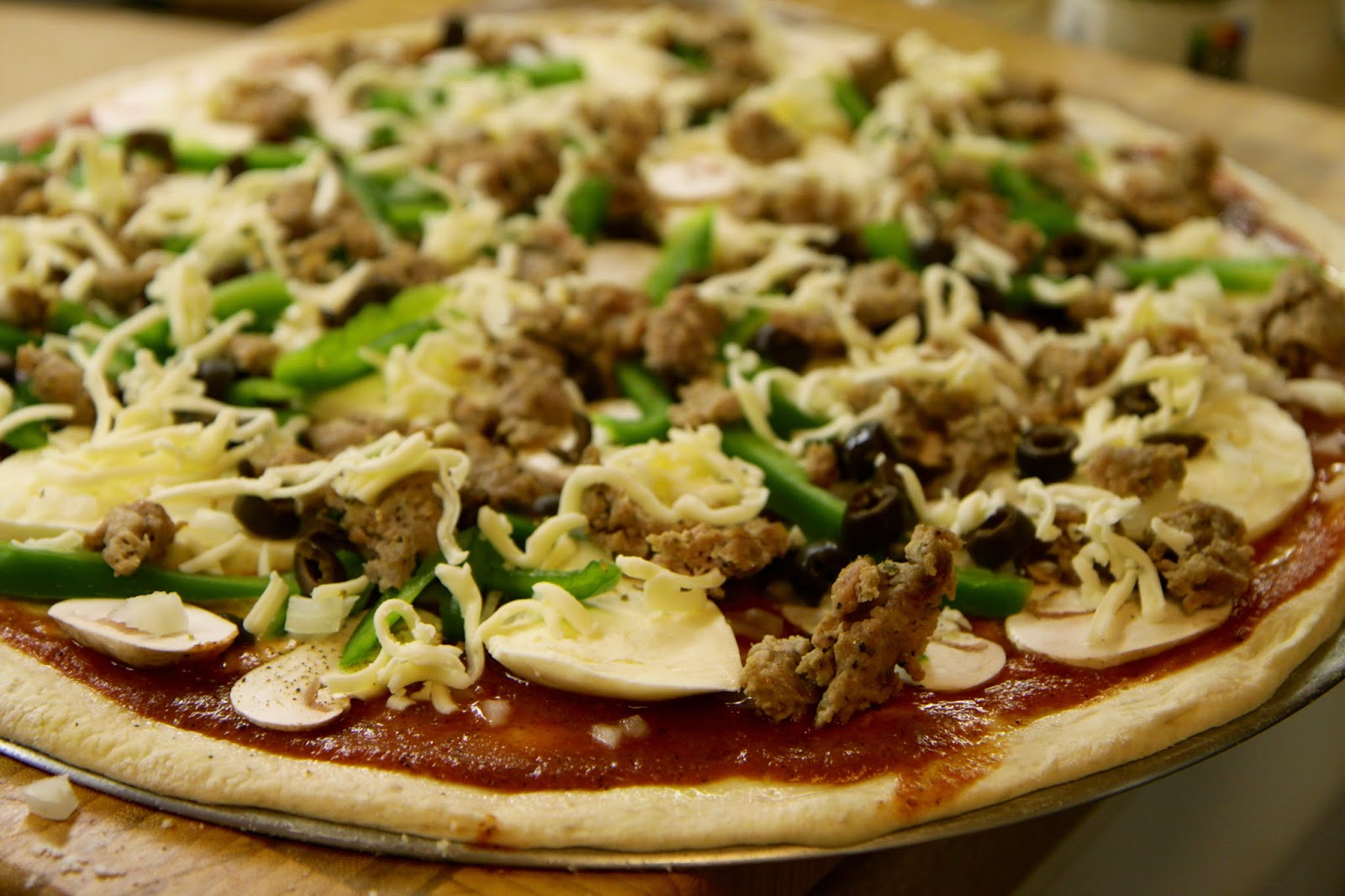 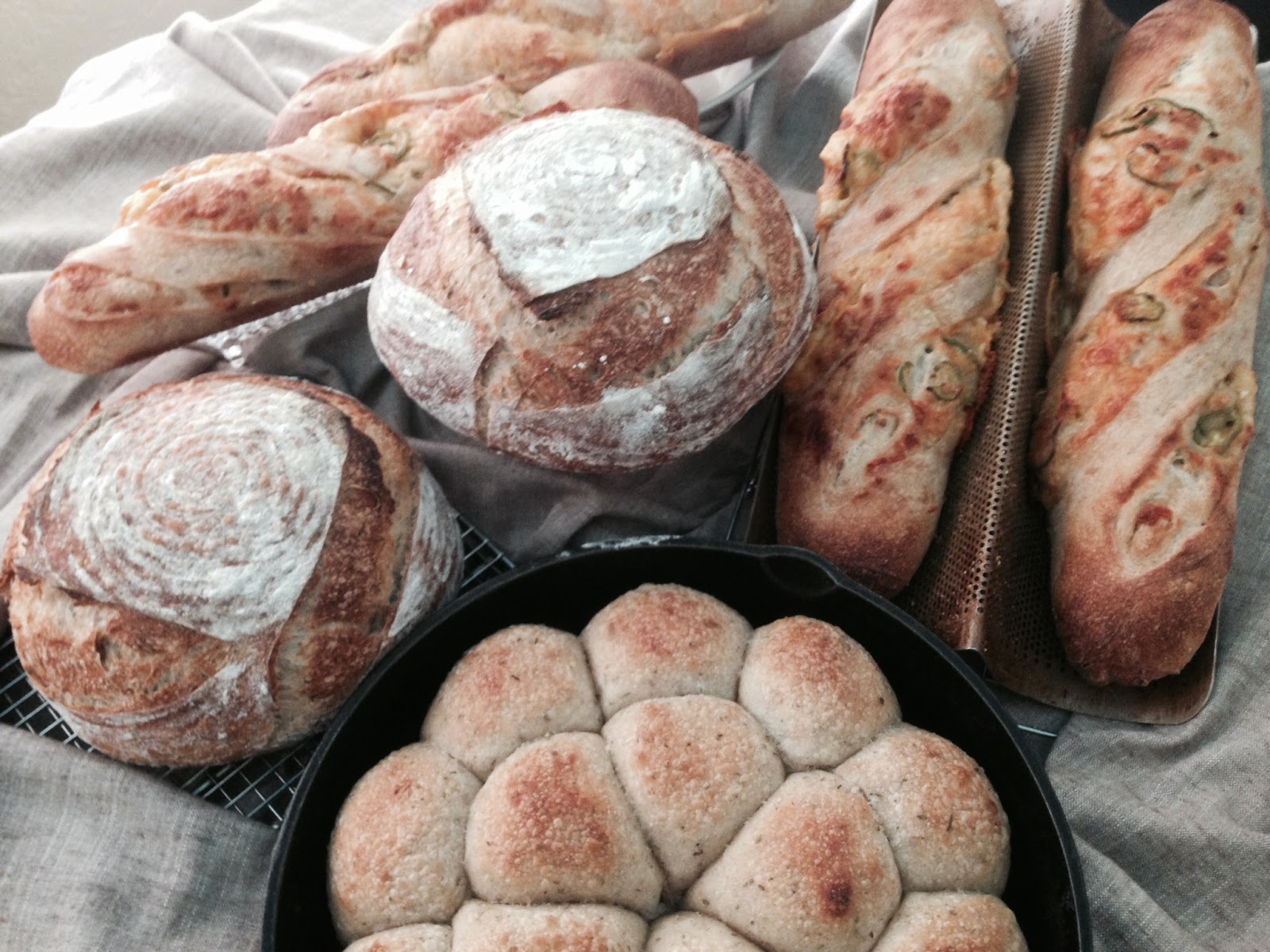 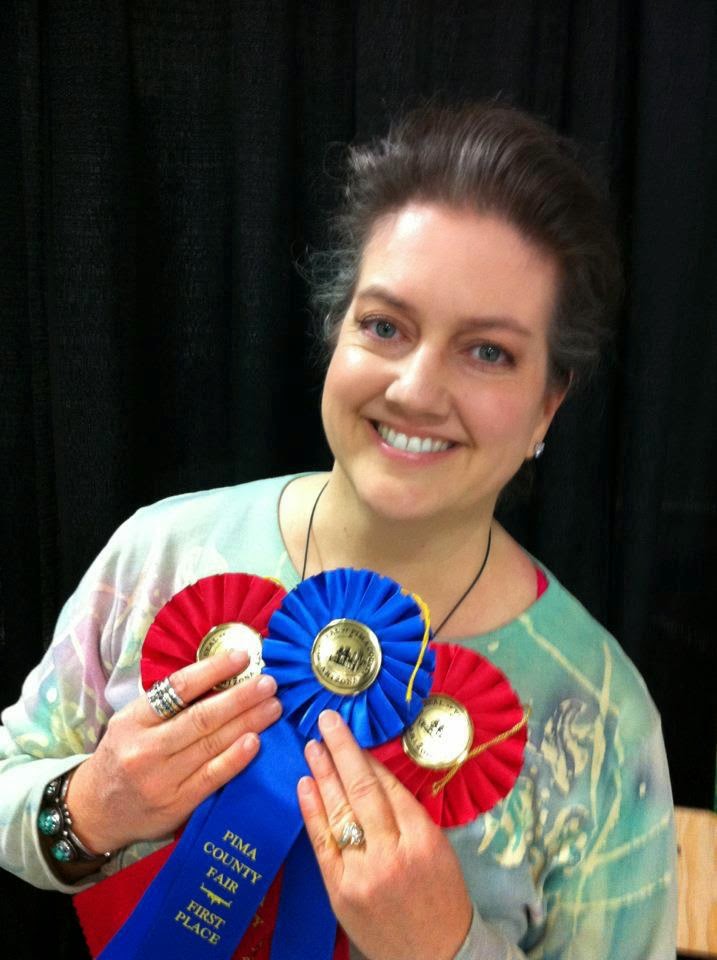 But after about six months, not all was well for me in Sourdough Breadland.  The weight began to creep back on, and my asthma worsened, but I continued on baking bread in spite of these warning signs because not only do I really love eating bread, but now I really enjoyed the whole process of making and baking it as well. Bread is convenient (too busy to cook—you can always make a sandwich, right?), it is delicious, it is comforting, it is filling and it makes great gifts. I don't think anything smells quite as good as freshly baked bread just out of the oven. However, there is growing evidence to support that wheat isn't just addictive as in becoming habituated, but that it is actually an opiate that acts in our bodies to make us hungry.  William Davis, M.D., who is the author of Wheat Belly argues that:

So it was with much sadness, lamentation and wailing on my part, I gave up wheat once more—fatter and wheezier—but much wiser. I have finally had to accept that I react to wheat, even if it is fermented, technically gluten-free and shaped with rice flour. In the following months I went back on a fairly strict gluten-free diet with only occasional indulgences, but I was still eating starch and sugar. I liked that gluten-free bun with my hamburger and my satisfying Duck Fat Oven Fries. There are some mighty tasty gluten-free cookies out there now in the marketplace. And guess what? The weight did not come off as it had before. Not even slowly. I found out that a gluten-free diet all by itself was not going to make the weight come off. Albeit that they are all gluten-free—sugar and gluten-free starch still make me fat.

A month ago, I made the decision to return to the Paleo-template diet that Misty recommended to me in early 2012 when my excess weight dropped off rapidly. I am back to Misty's Coconut Milk, Whey Protein and Blueberry Smoothie for breakfast or my Coconut Oil Hot Chocolate, which I am now emulsifying properly in my Vitamix as a reader kindly pointed out that I should do in their comments about my previous post.
Here is my slow to embrace realization—going gluten-free just doesn't cut it for weight loss for me. Going gluten-free is easy. In fact, I would go so far as to say that it's super easy. If one doesn't actually have Celiac Disease, there are an array of tasty gluten-free products in the present day marketplace to make the transition to a gluten-free diet a rather painless undertaking. Restaurants have caught on as well and are providing many gluten-free options. However, almost all of the "gluten-free" products replacing bread, pizza, cookies and desserts are loaded with starch and sugar which cause our blood sugar to elevate and we turn the excess calories into fat.
I feel better in general on a gluten-free diet and my asthma is far less. I am able to take half the medication that I did previously, but I still remain overweight—so it's back to Paleo for me. Conversely, cutting out refined carbs—namely refined sugar and starches— at least for me, is very difficult. It requires real discipline and meal planning in my hectic life. I shouldn't complain being that I don't even have kids at home complaining about what I am putting in their lunch box or what I am preparing for dinner. I am back to making my Paleo breakfast, packing a Paleo lunch, and I have Nom Nom Paleo sitting out in my cookbook holder for inspiration for dinners. I had the great pleasure of meeting the authors of that book, Michelle Tam and Henry Fong, a few months back. They were on a summer book tour, and stopped in the Whole Foods Market® where I work to sign books and say hello. They were kind enough to share my blog post for my Honey Simple Syrup recipe on their Facebook page.

I am happy to report that although I am still craving starch and sugar, I have lost ten pounds in a month. I have noticed that the cravings are subsiding as the days pass, and my energy is increasing. I also notice that I am once again less hungry, but I do need to eat my meals on time because in general, I do not snack.
We sisters are going to be having another Sistercation in the first week of December, and my goal is too have lost 25 pounds by then. I will most likely join in our holiday celebration by eating the delicious food that Michelle is already planning, and I will also most likely be eating some amazing sourdough bread—but only for a week. When I come home it will be back to strictly Paleo for me. And this time I have added insurance to get back on track quickly—this year I am already back at the gym lifting weights and doing some yoga, too. 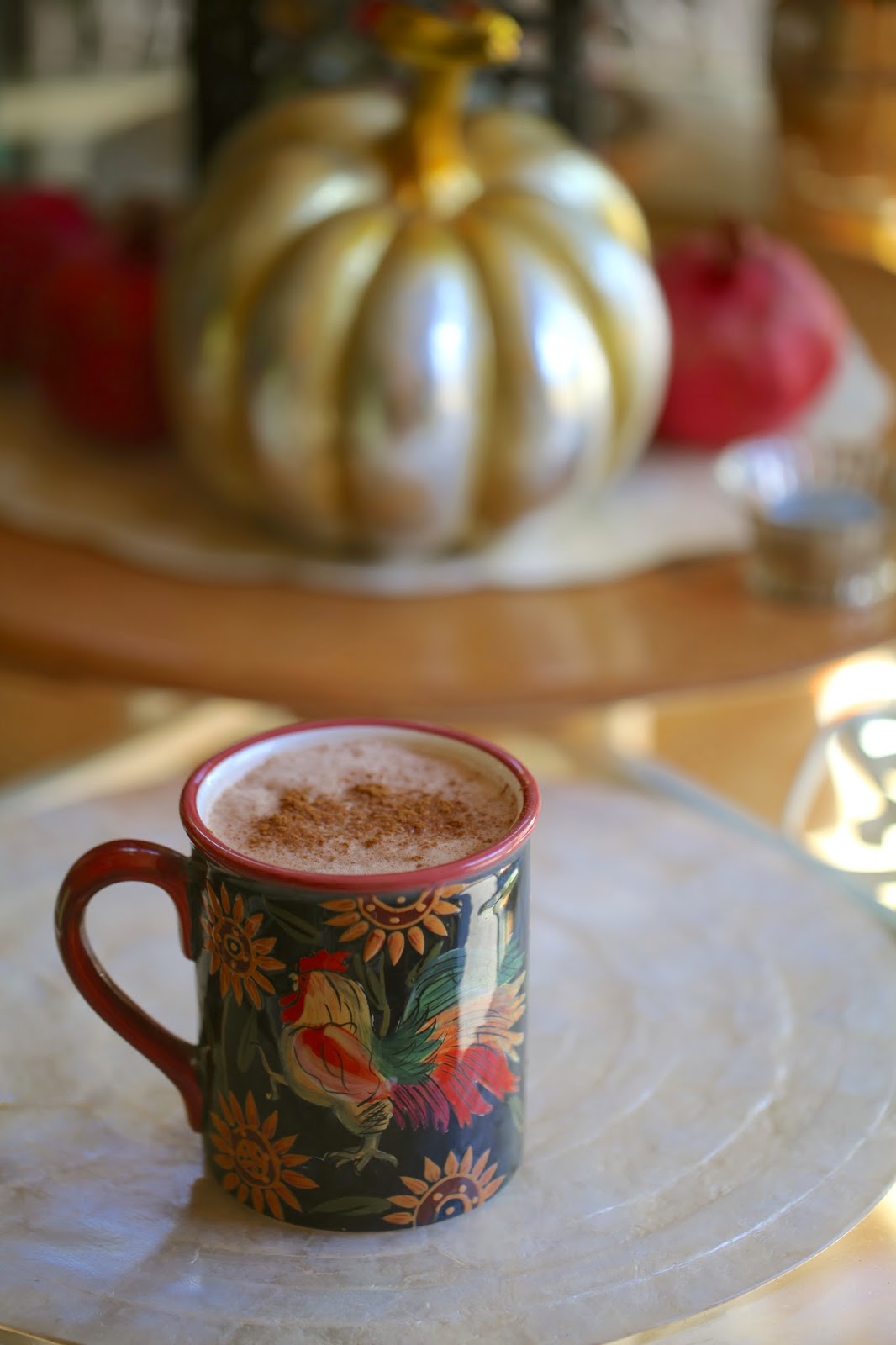 I discovered that having coconut oil in the morning is critical for me to lose weight. My coconut hot chocolate is a delicious way to get your dose in the morning. To learn more about the special properties of coconut click here.
Some months ago an anonymous reader of my previous post made this observation:
"This Hot Chocolate looks absolutely delicious! Have you tried blending the oils and the water together in a heated blender? Getting those ingredients to properly emulsify would improve the legitimacy of this lovely, healthy version of what once was a junk food."
When I tried the blender suggestion, I found that the oil did not separate out of the liquid and that instead of the coconut oil floating on top, there was a lovely creamy foam that was produced in the process. It's like having a hot chocolate latté.

Equipment:
Kettle (I love my Breville electric one)
Vitamix or other high-powered blender
Small funnel
Pyrex measuring cup (you will need glass that is tempered for boiling water)
Mug for hot drinks 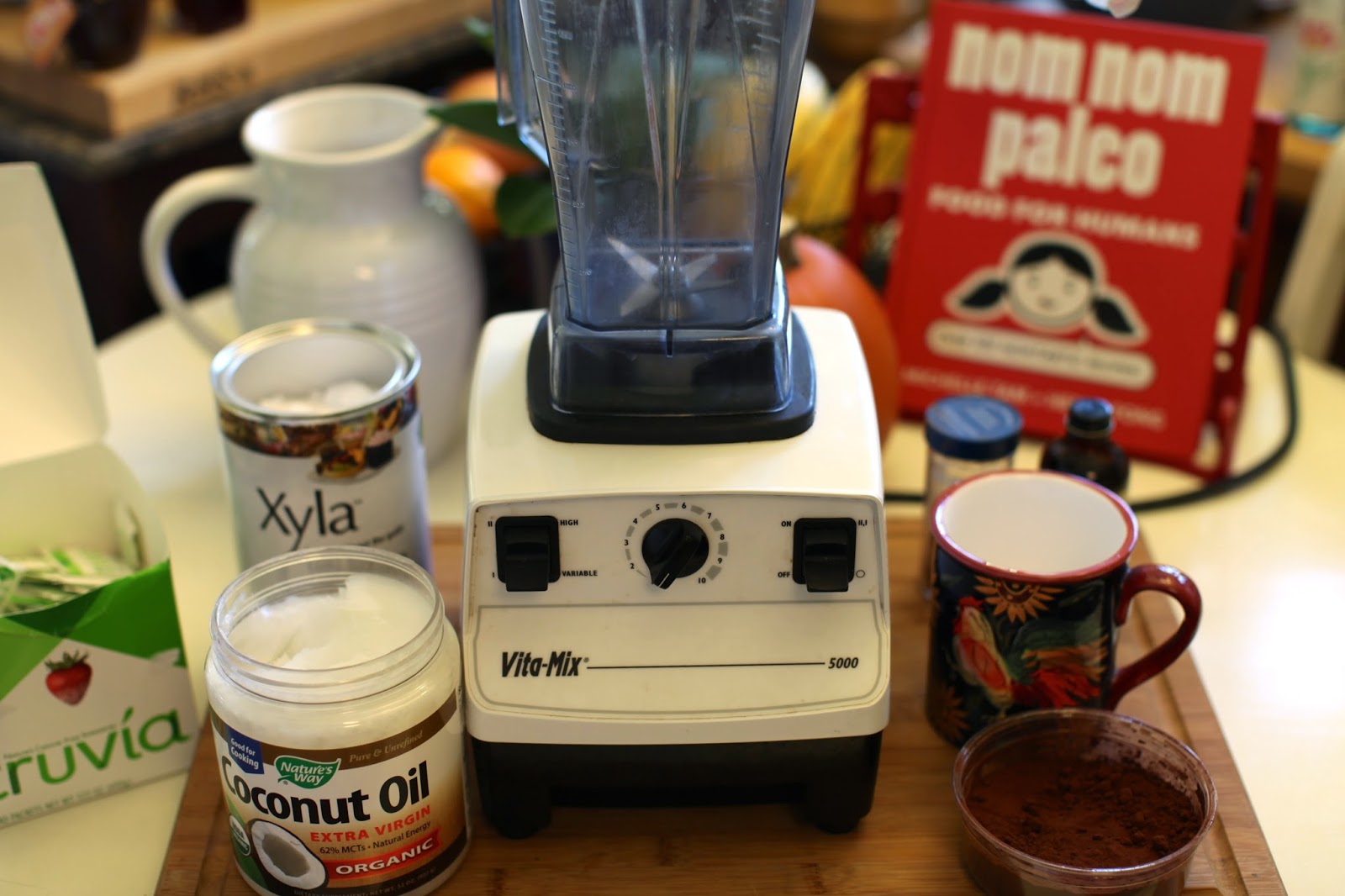 Ingredients for one serving:
1-2 Tbsps extra virgin coconut oil
2 tsps. Valrhona cocoa powder (or other dark and premium brand cocoa)
3 tsps. Xylitol (please read my notes on Xylitol in the previous post!)
2 packets of Truvia
OR—you can use one ounce of my Honey Simple Syrup or maple syrup if you aren't trying to lose weight and are on a strict Paleo diet.
1/2 to 1 tsp vanilla extract
1.5 cups of boiling filtered water
2 Tbsps of heavy cream (you can substitute coconut milk for a dairy-free version)
Ground cinnamon or cocoa powder to dust the top 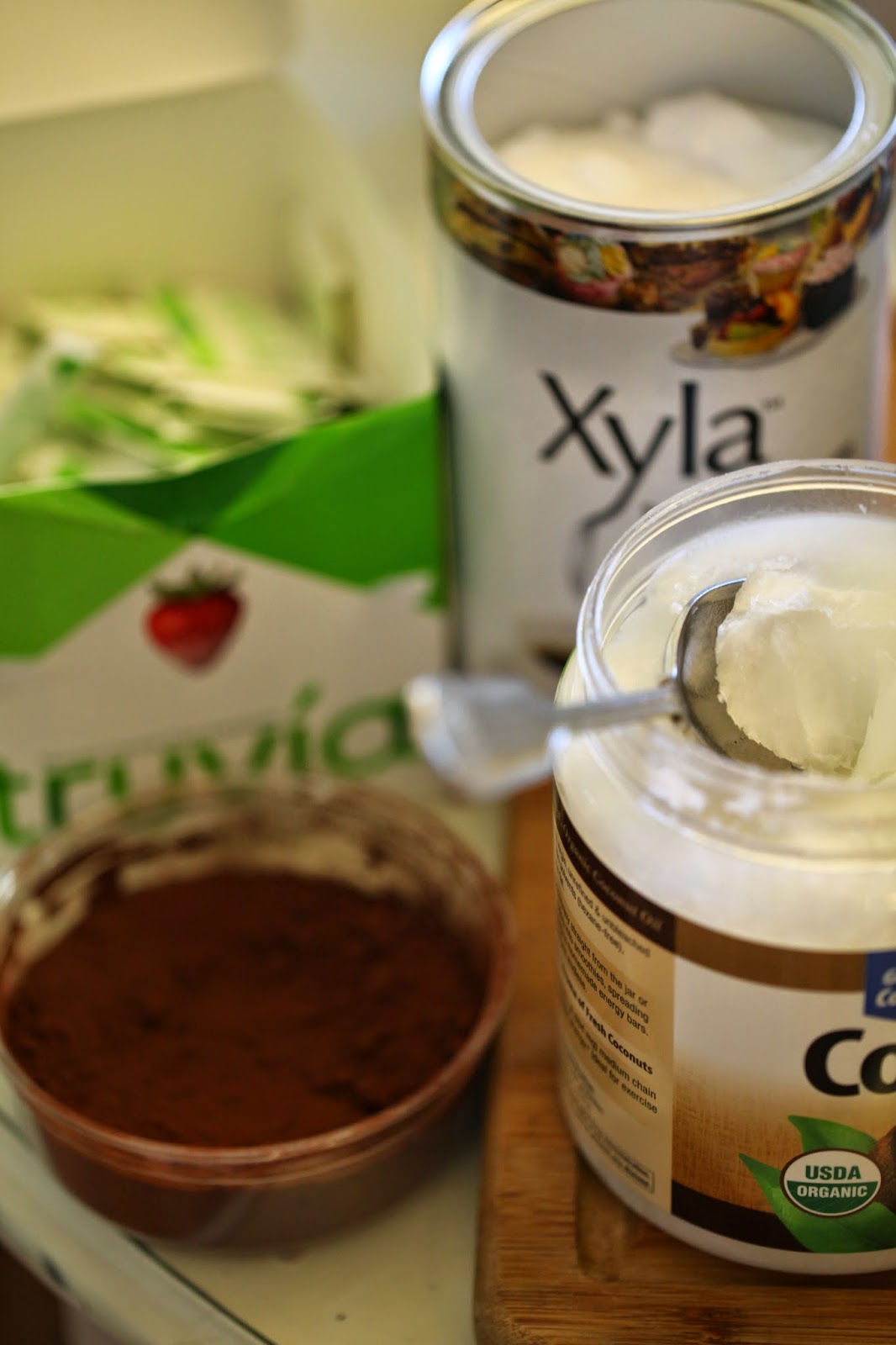 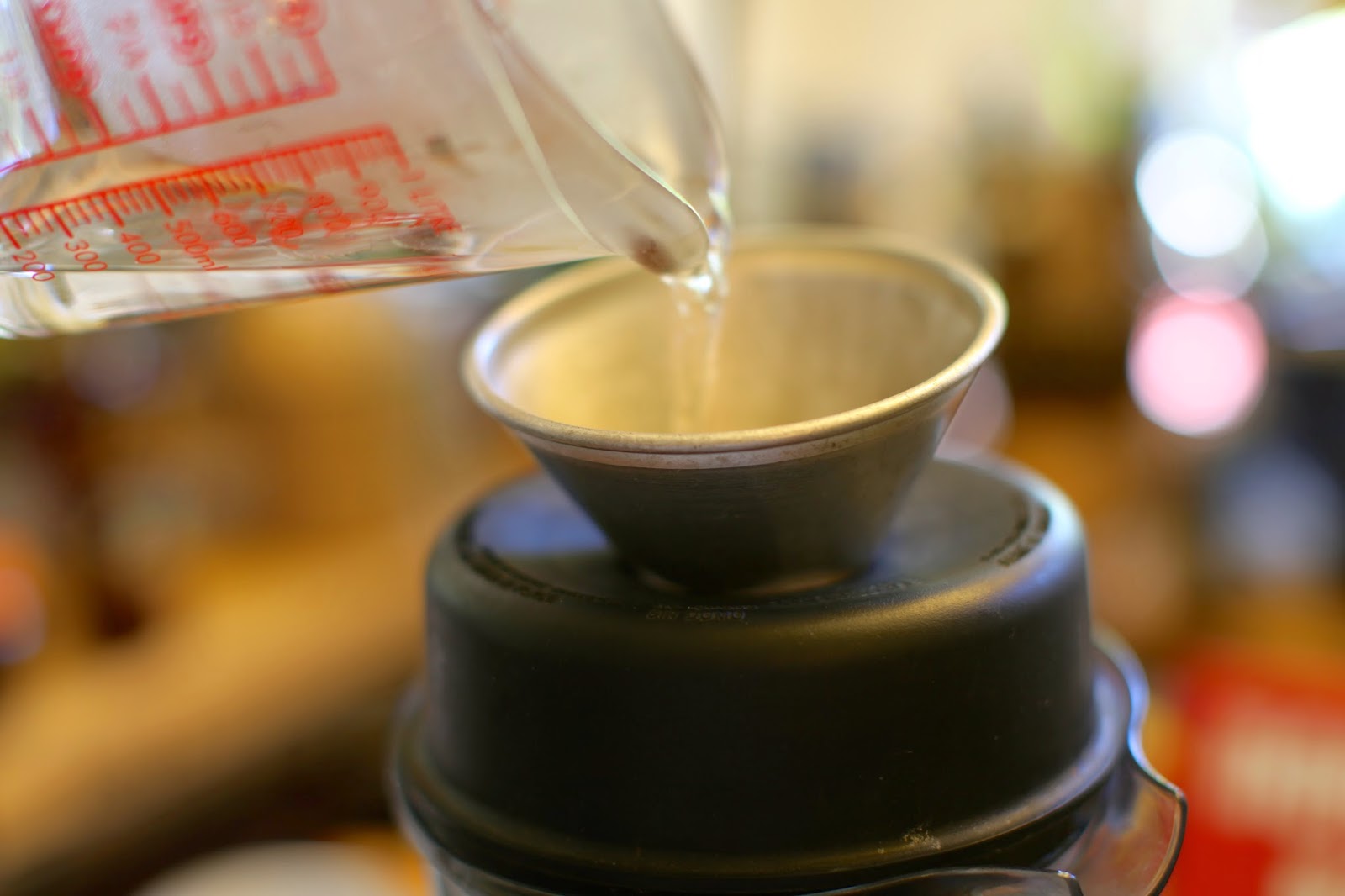 6. Pour in all of the water, and with the blender still going pour in the vanilla and heavy cream.
7. Increase the blender speed for a few seconds to make sure that all the ingredients are properly emulsified.
8. Turn off the blender, and immediately pour the hot chocolate mixture into the preheated mug. Garnish with cinnamon or cocoa powder if desired. 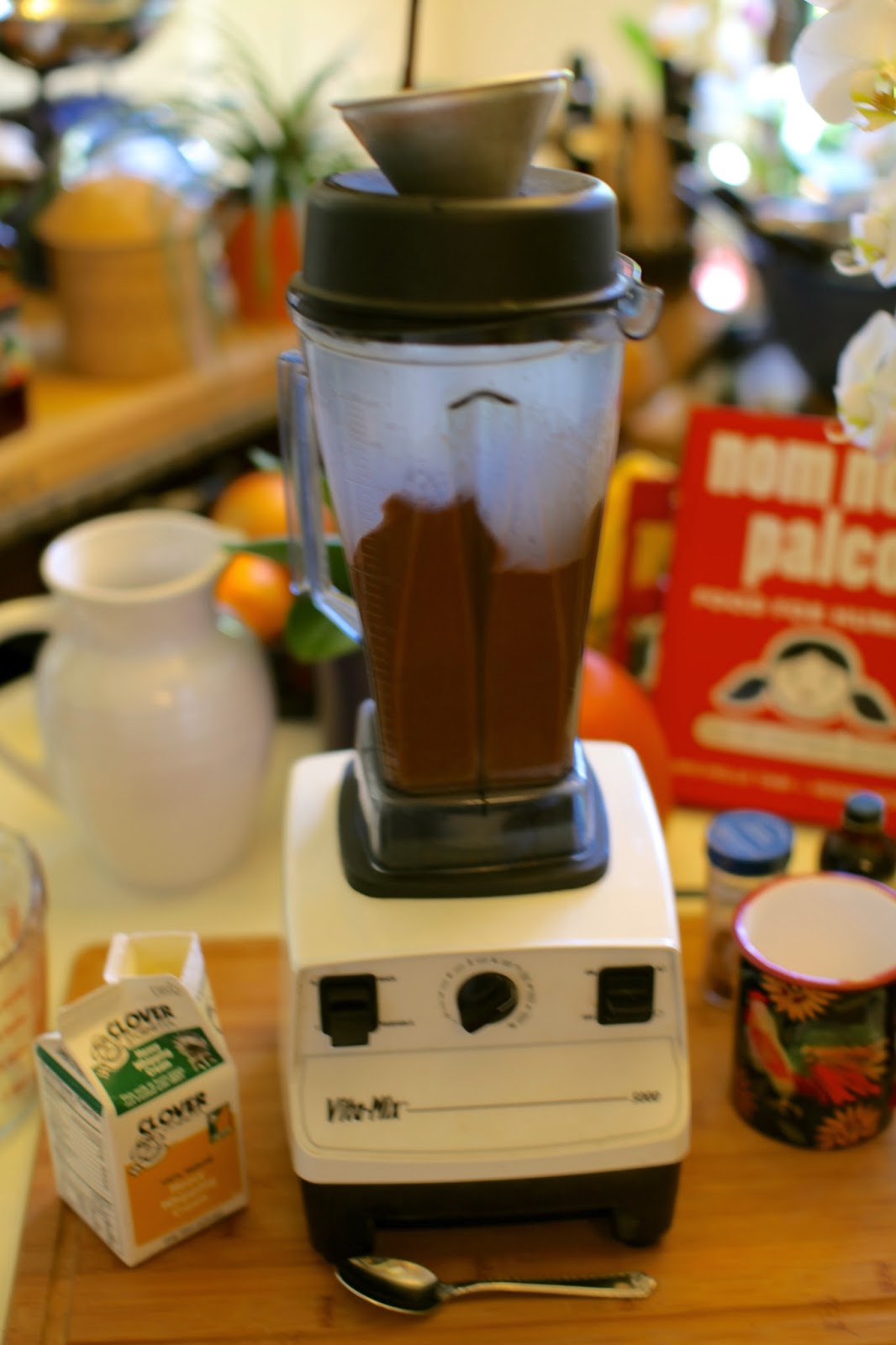