"The priest asked Judge Barnes to recommend the services of a few good churchgoing men to help him in his quest. When he had assembled them, the priest led the company off to Tumacácori Mission, where one of the men produced a shovel and dug a hole at a certain distance from the ancient church's altar. The priest descended into a small hidden chamber, returning with several metal cases full of gold bullion." ~ from The Lost Gold of Tumacácori by Gregory McNamee

Here's a little known fact about me—I practically swoon when I see or stumble upon a building that has unique architectural details. Because I grew up in the Southwest, it seems as if most commercial buildings are of newer construction. The high rises are typically elongated rectangles reaching for the sky, quickly erected by using construction materials of steel and tinted glass. Wedged into the urban landscape will be the occasional 18th or 19th century building, typically a church or a courthouse, that incorporates molded concrete columns, marble panels, granite, brick and iron scroll-work. Top the architectural wonder with a spire and I'm awe struck. Add a gargoyle and I'm practically giddy.

The oldest structures that we have in the Southwest are Spanish Colonial mission churches. California has 21 mission sites, and in Arizona, the oldest missions reside south of Tucson in the Santa Cruz River Valley. I've written previously about Mission San Xavier del Bac, that is also known as The White Dove of the Desert. It is beautifully preserved and is a top tourist attraction in Southern Arizona. (Take a look at this map, for more information on planning a sightseeing trip by car along the Juan Bautista de Anza National Historic Trail which begins in Southern Arizona and ends in Northern California, near where I used to live in San Jose.)
Further south, by about 30 minutes, you can tour the dilapidated, yet welcoming, Mission San José de Tumacácori. The site was abandoned in the mid 1800s and began to fall to ruin. In 1908, President Theodore Roosevelt declared both the Mission and the Grand Canyon national monuments. In 1937, a museum was built near the mission and there is continuing effort by the national parks system to preserve the site for future generations. 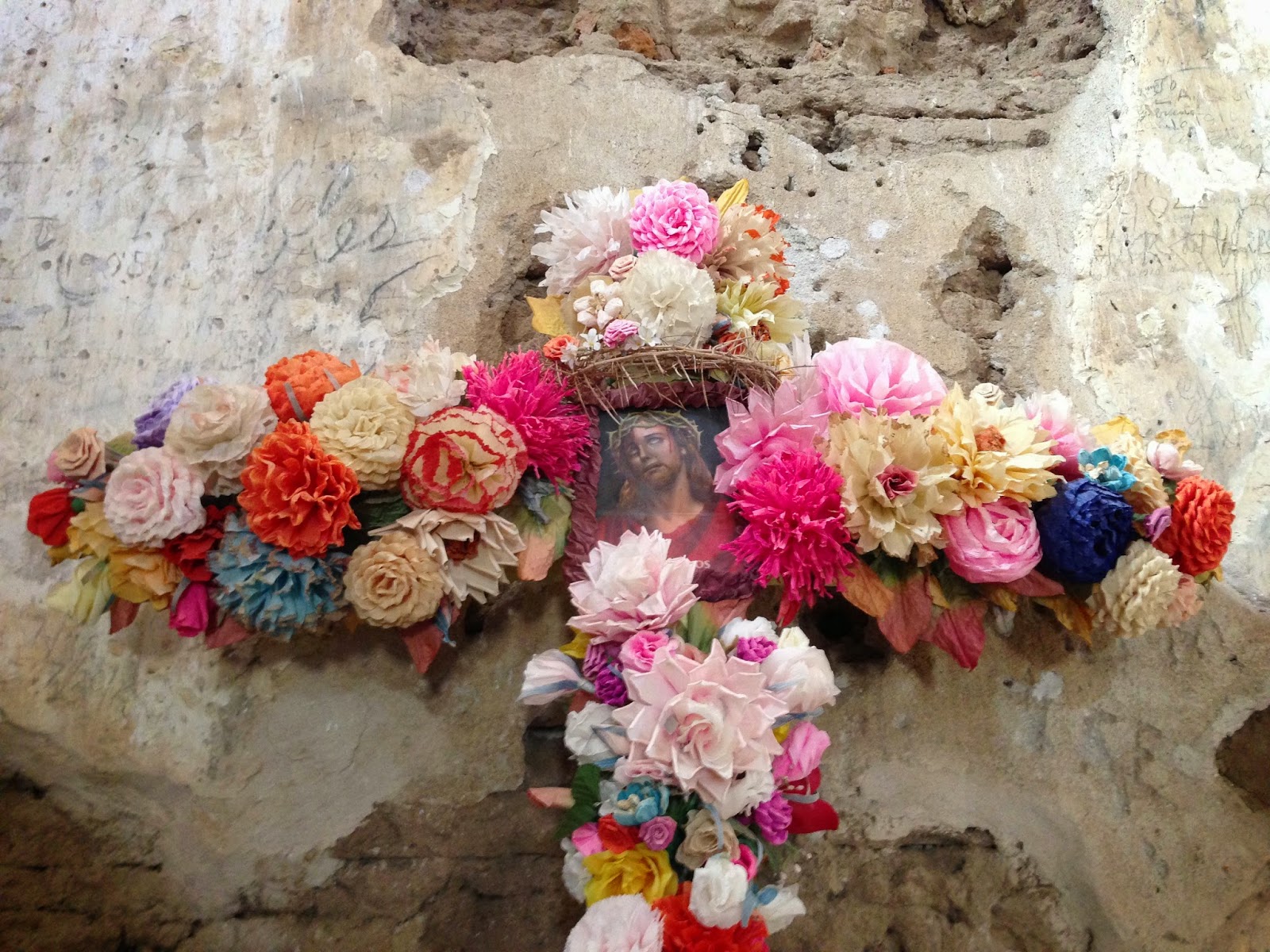 Due to human intervention, the 184-mile long Santa Cruz River sadly became a dry riverbed. With heavy rainfall, such as during the monsoon season from end of June to early September, the river flows once more. The Santa Cruz County fertile lands have been farmed for hundreds, if not thousands of years. First by the indigenous peoples, such as the Tohono O'odham, and then followed by the Spanish, then Mexicans, and then everyone else.
Today the cities of Patagonia, Sonoita and Elgin are home to vineyards growing grapes to produce wines. The vineyards also extend well into Cochise County. The city of Willcox is becoming a wine tasting destination for the region. The grapes that grow well in the arid climate of Southern Arizona are Shiraz, Petite Sirah, Barbera, Tempranillo, Cabernet Sauvignon, Sauvignon Blanc, Voignier and Pinot Grigio. As you can imagine, the area also produces a wonderful variety of chiles. And, believe it or not, the area is home to thousands of pecan trees, owned by The Green Valley Pecan Company.

I enjoy visiting Tumacácori in the late spring and early fall when temperatures are milder and the demonstration garden is thriving. I like seeing the pomegranate trees in bloom and bees collecting nectar from Hollyhock flowers. Across the grounds, the California poppy will voluntarily grow and the bright orange petals sway in the breeze. A bench or two positioned under tall mesquite trees give some areas of respite as shelter against the hot sun. I am tempted to visit as well for the Guadalupe Fiesta which falls every year during the first week of December. Folklorico and Mariachi performances are certainly a draw for me—especially in such a beautiful setting.
Unlike San Xavier del Bac, where you can sit in an old wooden pew and spend time in reflection while viewing the incredible murals and paintings, Tumacácori is a space to stand in and wonder what it looked like hundreds of years ago when it was freshly painted in decorative motifs and statues of saints stood in alcoves—carved eyes with fixed gazed looking adoringly towards heaven.

After you finish touring the church and grounds, be sure not to leave Tumacácori without first visiting the Santa Cruz Chili and Spice Company. You can't miss it. There's only one main street and the gargantuan sign makes the retail shop, in a converted ranch house, easy to find. On my last visit, I purchased their famous mild chili powder along with some ground specialty chilis. The family-owned company also has an online store, and some of their products, such as the delicious Chili Paste is stocked at Whole Foods Market, at least in the Tucson area. 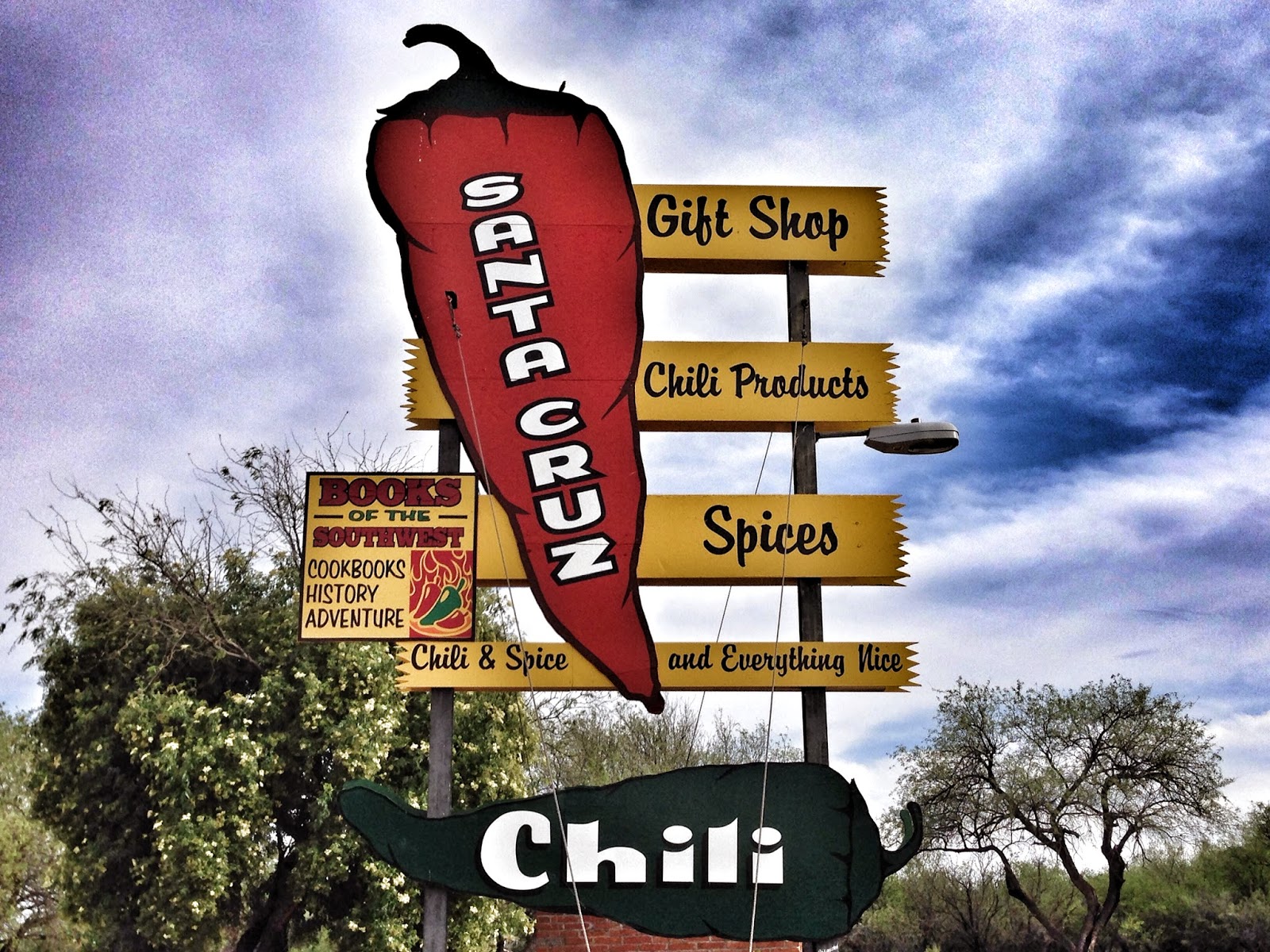 P.S.:  Please "like us" on Facebook where we post some of our favorite finds from our wanderings and from around the "internets".
If you'd like to see more of our photos, join the party on instagram: #salvationsisterlinda and #salvationsistermichelle and #beaumontjuliette ('cause sister #2, or wenchy-pooh as I like to call her at this very moment, couldn't get with the salvationsisters' naming convention.) 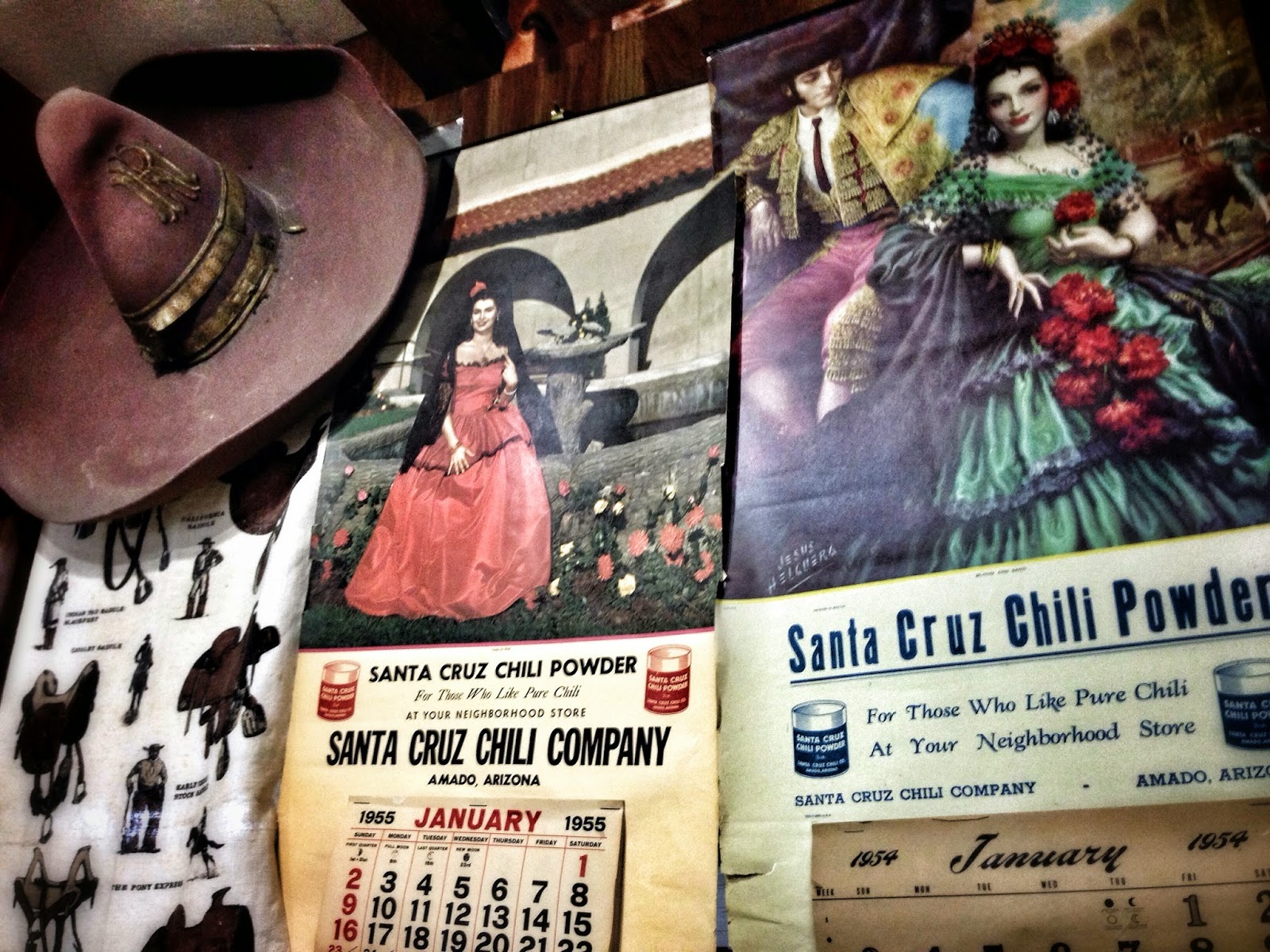 Are you familiar with The Better Homes and Gardens Cookbook? It was the most used cookbook in my mother's kitchen. It was also the first cookbook I purchased when I left home. I've been making this recipe for over 30 years. Because I like to tinker in the kitchen, I've made a few updates along the way swapping ranch-style pinto beans for kidney beans, chicken sausage for ground beef, fire roasted crushed tomatoes for plain tomato sauce and adding a smokey essence by choosing smoked salt and paprika as flavor boosters. Whatever you do, don't leave out the jalapeño. The little green chile is not typically too hot and it adds a lot of flavor. If you absolutely can't get your hands on a jalapeño, then sprinkle about one teaspoon of chili flakes over the onions while sautéing.
This recipe is super easy and keeps well, gaining in flavor as it ages a day or two. You'll love it on Sonoran Hot Dogs or garnished with your favorite toppings. My favorite additions are sour cream, crumbled corn tortilla chips and shredded cheddar cheese.

Procedure:
1. In a large soup pot, melt the bacon grease or ghee over medium heat until melted. Add onions and a large pinch of smoked salt or sea salt. Sauté onions for about 5 minutes, then add diced bell pepper and minced jalapeños. Sauté for 5 minutes, then add bulk sausage, stirring to incorporate and using a spatula to break the sausage up into smaller pieces. Add the minced garlic and stir again. Set a lid slightly ajar on top of the pot to help build heat. Stir about every 5 minutes or so, continuing to crumble the sausage into bite size pieces.
2. Once the sausage is cooked through, about 25 to 30 minutes, add the spices and oregano and stir well. Add the undrained crushed tomatoes and beans, stir well. Gently bring to a boil over medium heat. I like to bring the pot of chili and the garnishes to the table so everyone can serve themselves. 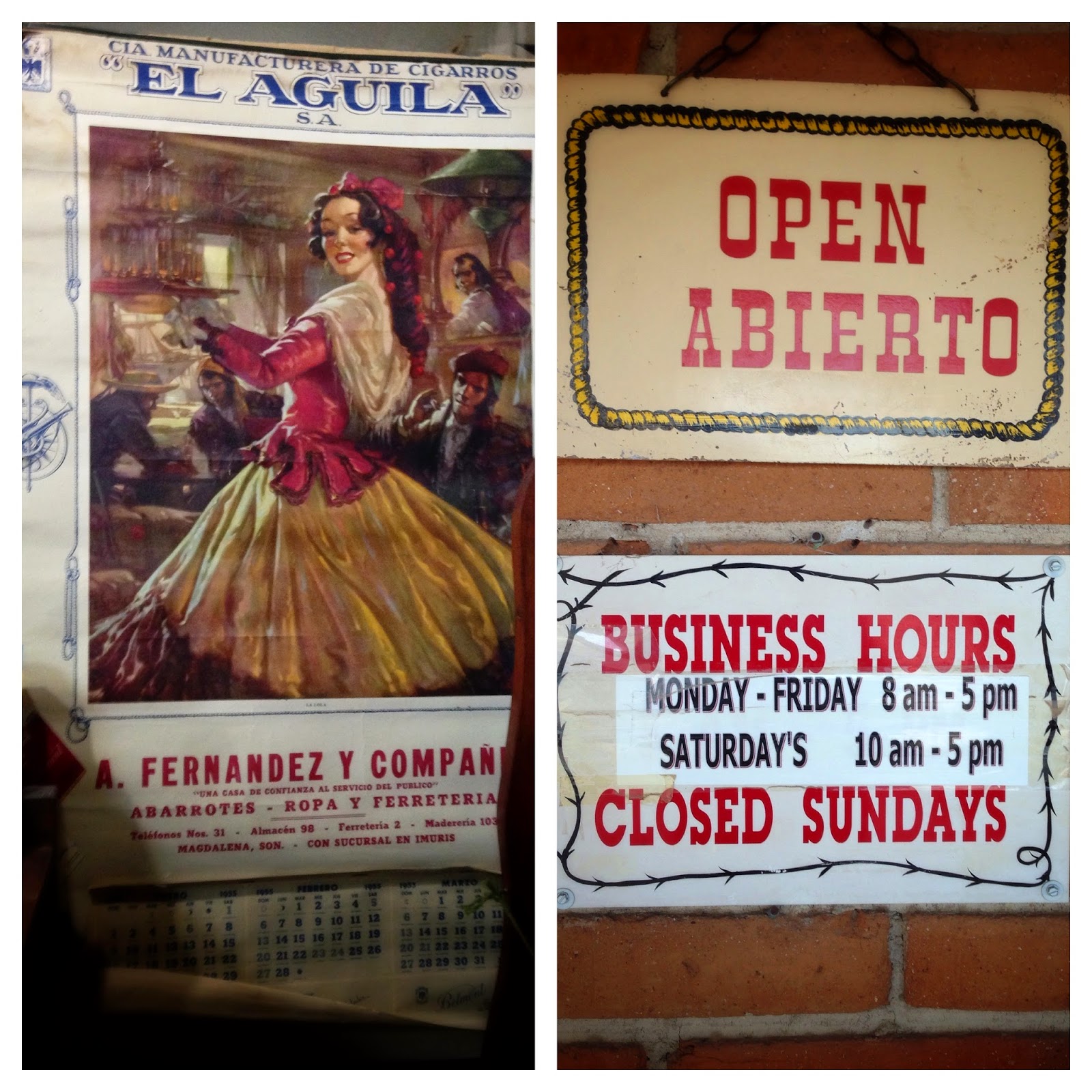 "As human beings, we are the only organisms that create for the sheer stupid pleasure of doing so. Whether it's layout out a garden, composing a new tune on the piano, writing a bit of poetry, manipulating a digital photo, redecorating a room, or inventing a new chili recipe—we are happiest when we are creating."  ~ Gary Hamel
Posted by Salvation Sisters at 10:02 AM

Email ThisBlogThis!Share to TwitterShare to FacebookShare to Pinterest
Labels: Mexican