"Happiness is a kitchen full of family." —Unknown

More often than not when my extended family gets together for a meal we prepare Mexican food. Nearly three years ago, we made carnitas for my daughter, Maddie's graduation, along with shredded beef tostados, creamy refried pinto beans, coleslaw, strawberry-infused margaritas, and pineapple-ginger auga fresca. For the past two years we gathered together for festive afternoons of making tamales in early December in early preparation for our Christmas dinner. My sister Linda was known for her Feliz Navidad Fiesta Menu during the holidays, which albondigas soup and cheese enchiladas were key components. It seems as if we can never get enough of a good thing. We all love the spicy food hailing from our neighbors south of the border.

Last month a handful of our larger group were all together again at my house the day before Thanksgiving. The day before turkey day I am energetically baking pies and prepping sides for the feast. If I'm too busy cooking the night before Thanksgiving, which is normally the case, my husband picks up pizzas and a big salad so that I can avoid making dinner. I love the fact that I can be too busy cooking tomorrow's meal to cook tonight's dinner. In my family everyone cooks, and cooks well, so I figured that I would put all that talent to good use and ask everyone to pitch in to help put a homemade dinner on the table instead of bringing-in take-out. Ask and you shall receive.
My niece, Sonora volunteered to fry the corn tortillas and her sister, Avalon agreed to stuff the enchiladas. In a pre-planning move, I made the enchilada sauce the prior weekend along with a taqueria-style salsa. My sister, Juliette shredded the specialty Menonita cheese (made by Menonites) that she purchased just over the border in Mexico specifically for the enchiladas. Maddie arrived home a little later than expected because traffic was predictably terrible. She was thrilled to have a margarita poured for her shortly after walking in the door, plopping down her bags, and letting out a deep sigh of relief to be safely home for the holiday. No rest for the weary, I promptly tasked Maddie with making the guacamole and the Mexican crème fraîche, which always seems to be her assigned job. I was in charge of making the homemade refried pinto beans that everyone adores. As a group we can forgo the rice but we can't skip the beans. Many hands make light work and within short order we finished prepping the garnishes and made a really delicious dinner together while we chatted, sipped margaritas and laughed. This cherished time together is what memories are made of.

Best Chicken and Cheese Enchiladas with Red Sauce
The recipe yields two dozen enchiladas exactly, if you don't over-stuff the chicken. Avalon made a tray of cheese enchiladas because those are her favorite, while Maddie much prefers chicken enchiladas. We're so democratic; everyone got what they desired. Of course, if you prefer another protein, shredded beef or carnitas also make terrific fillings. As does leftover turkey after Thanksgiving. Seasoned and fried ground beef (or turkey) is also tasty.
I've had trouble with commercially made corn tortillas disintegrating while baking, even after the tortillas have been fried. I was surprised that I did not experience the same issue with hand made corn tortillas that I purchased from a purveyor at a local farmers' market.
I think this enchilada sauce is so good because it contains tomatillos. I suspect the tomatillos lend a smoothness taste-wise that offset the pungent, spicy chiles. I've been told by numerous people that this is the best enchilada sauce they've ever tasted. I have to agree... it's a winner. 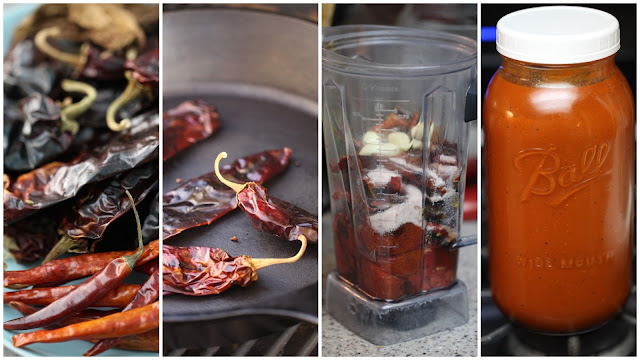 To prepare the enchilada sauce:
1. In a large sauce pan or pasta-cooking pot, bring water to a boil. Remove from heat and cover pan with a lid to retain heat. This water will be used to soak the toasted chiles.

2. Toast the chiles in a skillet over medium-high heat on a stove-top (with the hood fan on high), or grill. I prefer to toast the chiles outside on the grill in a cast iron skillet because I am sensitive to the chile fumes. Toast the chiles until just softened, one to two minutes (flipping once or twice). Be careful not to over-toast because the chiles will become bitter if charred in areas. Transfer the chiles to a large bowl. Bring the water to a boil again and then pour over the chiles. Make sure the chiles are submerged by covering the bowl with a dinner plate. Set aside for a minimum of 20 minutes, or up to an hour.

3. Drain the chiles, discarding soaking liquid. I prefer to remove the seeds from the chiles before blending. Pull off the stem, which will also remove a portion of the seeds. With a knife, slice each chile open and gently remove more seeds. Transfer deseeded chiles to bowl of a blender. Depending upon the size of your blender, you will likely need to work in 2 to 3 batches. Add some garlic cloves, and some salt. Add about a third of the tomatillos and some of the cooking liquid; however, if you are using canned tomatillos, drain and discard liquid in the can and substitute cold water or chicken broth. Blend well. If needed, add more liquid to ensure that the enchilada sauce isn't too thick.

4. Pass the blended sauce through a sieve to remove the seeds and chile particles. Discard the remnants and clean the sieve with water between batches. Finally, stir in the lemon juice or lime juice to the strained enchilada sauce. Carefully taste. Add more salt, if needed. Cover and refrigerate, until needed. Sauce can be made up to two days in advance. It also freezes well.

*To cook fresh tomatillos instead of using canned:
In a large saucepan, heat olive oil. Saute diced onion over medium heat until translucent. Add tomatillos and chicken broth. Bring to a boil, reduce heat and simmer 10 minutes, stirring every so often. Turn burner off and let the tomatillos rest.

To prepare the chicken:
I frequently use my Instant Pot to pressure cook a whole chicken. I follow the instructions from Nom Nom Paleo's recipe for Chicken Phở. If you have a 6-quart Instant Pot, buy a 4 pound chicken and use about 7 cups of water. The rule for pressure cooking is that the pot is not more than 2/3 full. I have an 8-quart Instant Pot, so I buy a larger chicken, add more water and tack on a few minutes to the cooking time. Add all the ingredients to the InstantPot. Lock lid and verify that the pressure valve is closed.
Press the Manual button and set the Instant Pot to cook under high pressure (~12 psi) for 14 minutes. When done, turn off the Instant Pot. Let the pressure decrease naturally for 20 minutes then turn the release knob "up" to let any remaining pressure escape. Remove lid. Wait 5 minutes and then transfer the cooked chicken to a large bowl. The chicken will be soft and tender and might break into sections as you lift from the pot. Add cold water to the bowl to cover the chicken. The cold water will immediately stop the cooking process and it will prevent the chicken from drying out. When cool enough to handle, shred and reserve the meat. Discard the cooling water and the bones. Strain the broth and reserve for another use, such as making Mexican rice as a side for the enchiladas.
To cook the chicken in a soup pot on the stove will take about 1-1/2 to 2 hours from start to finish. In lieu of this step, you can substitute store bought rotisserie chicken.

To cook the chicken:
1. Place chicken in stock pot and cover with water. Bring to a boil over high heat. Skim and discard the scum as it rises to the surface of the pot. Reduce heat to medium. When the scum stops rising, add the rest of ingredients. Adjust heat to retain a slow simmer. Simmer for one hour.

2. Remove chicken from pot and place on a rimmed sheet. Let sit until cook enough to handle. Remove meat and shred. Discard bones and fat. Store in refrigerator until ready to use. Can be made up to 2 days ahead. If you like, toss the shredded chicken with some of the enchilada sauce to lightly coat.

3. Meanwhile, while chicken cools, let broth continue to simmer for another 30 minutes to concentrate the flavors. Turn off the heat and let rest for 20 to 30 minutes, then strain broth. Discard solids. Reserve chicken broth. Transfer to refrigerator and store up to two days. Yield: about 3-1/2 quarts chicken broth.


Fry the corn tortillas:
1. Pour about 1-inch oil in a cast iron skillet or deep, heavy pot. Heat oil over medium-high heat. Working one at a time, fry a corn tortilla. You should only need to turn it once. Fry about 30 seconds on each side until the tortilla starts to take on some color and begins to crisp a little at the edges. Transfer the corn tortillas to a paper towel lined tray. As soon as the tortillas are cool enough to handle, assemble the enchiladas.

Assemble the enchiladas:
1. Spray a rectangular pan with olive oil and then cover the bottom with a nice layer of enchilada sauce, about 1/4-inch thick. Juliette found the narrower, rectangular Pyrex glass trays at the thrift store (of course she did) which are a perfect width for enchiladas. Sometimes I'll put individual servings in smaller heat proof dishes. This is also a good way to freeze individual servings (see image below), wrapped well in aluminum foil.

2. We used to dunk the fried tortillas in the enchilada sauce before filling but not any more. Juliette discovered that if she just poured some of the sauce on the bottom of the tray, and some over the top of the prepared enchiladas that the tortillas got pleasingly crispy on the ends during baking. To dip or not to dip, that is the question you must consider and answer for yourself! I have switched to tossing the shredded chicken with some enchilada sauce and do as Juliette does. Lightly sprinkle cheese over the filling. Roll up and place the stuffed tortilla seam-side down in the pan. Repeat.

3. Poura cup or two of sauce across the enchiladas in the pan. Sprinkle top with cheese. Bake trays uncovered at 350°F for 20 to 30 minutes until fragrant and bubbly. Let the enchiladas sit for about 10 minutes before serving. 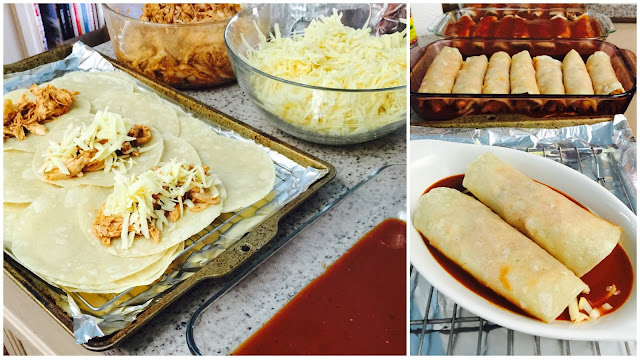 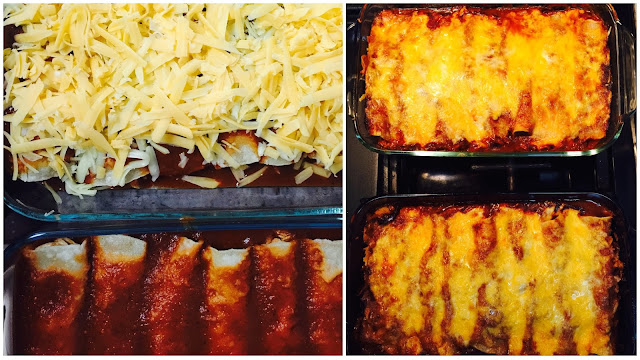 "Eating is a necessity, but cooking is an art." —Unknown
Posted by Salvation Sisters at 8:54 AM