by Linda
Photos by Linda and Michelle


"You are all made of real poop." —Anne Frank, The Diary of Anne Frank and Related Readings 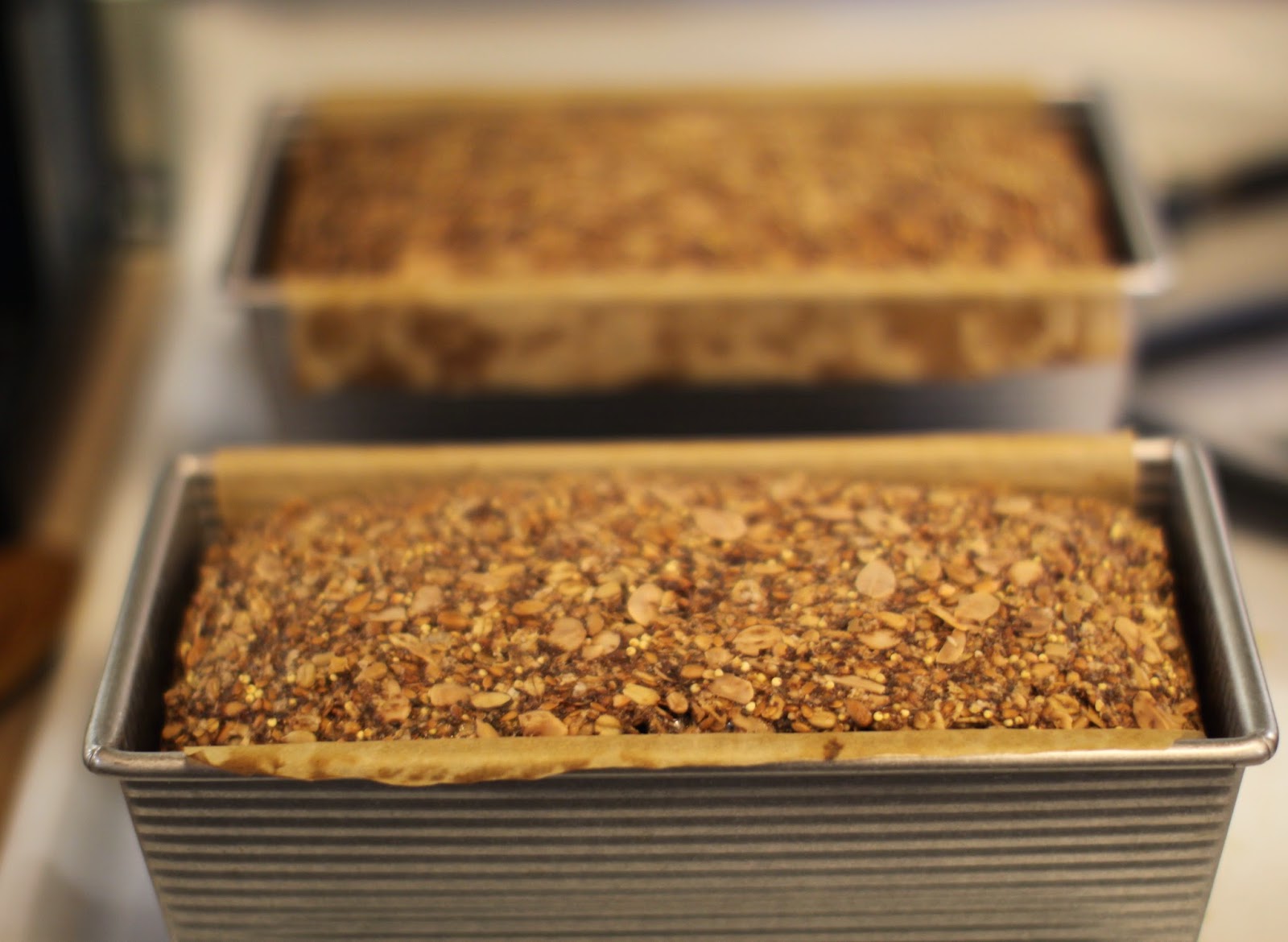 If I should ever decide to get back into the baking business again, I think I would open a shop where the bread recipe that we are sharing today would be the star of the show, and I would name my bakery Life-Changing Bread. While that may seem like a hyperbolic claim, Michelle and I have found that this bread actually has changed our lives for the better.
No one enjoys discussing the topic that I am about to broach, however, for almost 25 years now, I have been working in the vitamin and supplement aisles of California talking to people about health and nutrition. A problem/question that comes up frequently—as in every single day—with my customers is how to make pooping a non-issue? How does one have regular bowel movements, and how does one have the poop just slide on out without effort (hemorrhoids are are also a frequent topic and not just by pregnant women)? In my experience, most people are reluctant to admit that they are having difficulty going #2, in spite of knowing that pooping is a natural and necessary part of having a healthy body. Everyone poops and everyone must poop or die. Prune juice simply is not taking care of the problem for the majority of people who suffer from chronic constipation. Each year Americans spend more than $700 million on laxatives. 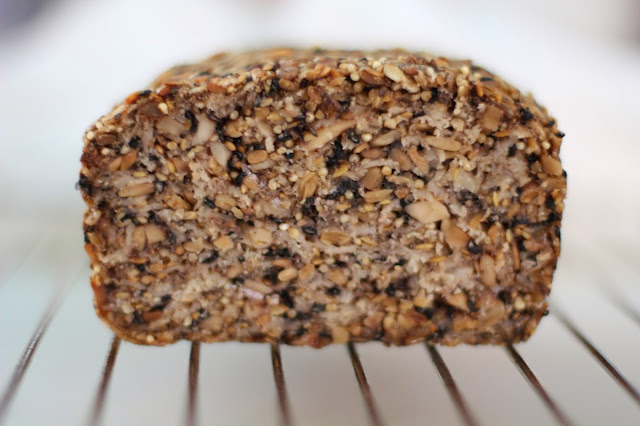 Hence, we all know that we need fiber, but fiber supplements are problematic, and the topic of fiber supplementation is somewhat a controversial one. We all know that we need it, but in what forms, how much, and when? Chris Kresser, M.S., La.C is one of my favorite sources for nutritional information. In his article, Myths and Truths About Fiber, Chris addresses the conundrum of how to get fiber, and shares some of the growing research about fiber. More isn't necessarily better, and sources of fiber are important.
Years ago I helped develop a bread recipe at the hotel where I worked as the pastry chef. The bread became hugely popular with the guests, and they would frequently buy loaves to take home. Later I would bring the bread recipe to a bakery/cafe that is now defunct in Solvang, California, which is primarily a tourist town. I began shipping bread to different parts of the country, so that folks could have my Grain and Seed Bread (dubbed Bread Regular by my brother-in-law, Jay—I will let you put two and two together). I am including this recipe also, but I no longer make it because I stopped eating gluten-containing foods over three years ago, and overall I feel much the better for it—less asthma, allergies and congestion. The heartburn that I was starting to have regularly vanished. However if you still eat wheat, this is yeasted-version and is more akin to what most people think of as bread. Sadly I have found that the gluten-free breads that are available commercially are not full of fiber, but are made from various starches. In other words, not very healthy for you, nor do they have much flavor. 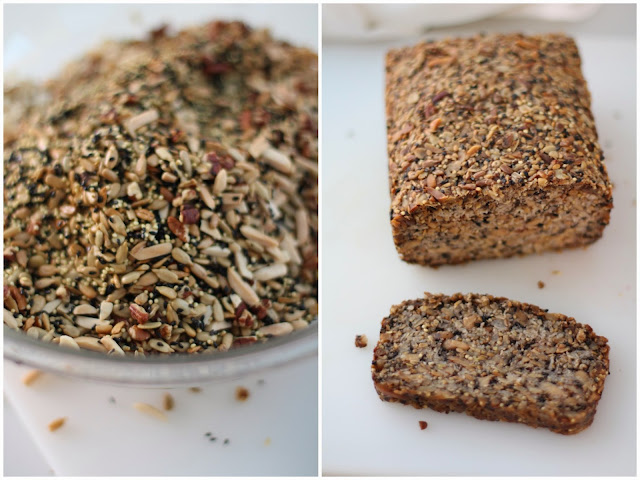 Recently Michelle and I found this gluten-free bread recipe featured in a blog post. The bread is full of nuts and seeds with the addition of gluten-free oats—fiber galore, and it uses coconut oil as the fat. Awesome! Michelle made it first and happily reported that not only was it delicious, but it had the same effect as my old Bread Regular. I decided to bake it immediately on her recommendation, and I have to say that ever since I have a toasted slice in the morning with some almond butter, and from then on I am not thinking about you know what—at all... except during the sixty seconds it takes to get my business done and then get on with my day. If pooping is something that you would like to think less about, as is the case for many adults and children, you are going to want to bake this bread for yourself and your family. Toast up a slice and have with tea or coffee in the morning, and getting your fiber for the day will be a tasty treat, and not an onerous chore. This bread makes great toast and is also perfect for open-faced sandwiches. #pooplikeachamp 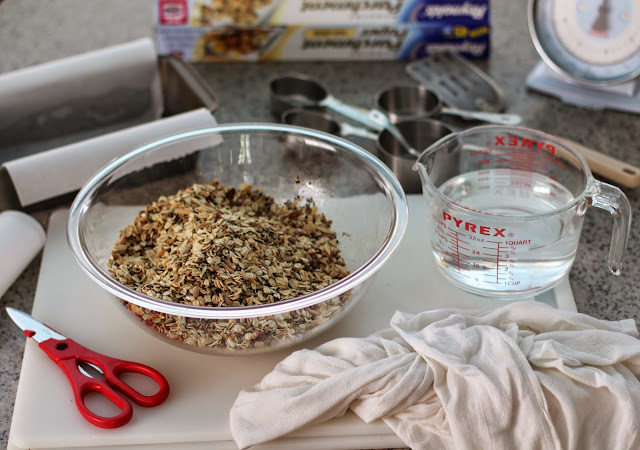 Life-Changing Gluten-Free Nut and Seed Bread (Our New "Bread Regular")
The only down side to making this bread is it does require quite a few different ingredients. Linda accidentally purchased gluten-free quick cooking rolled oats to make this recipe, and it calls for old-fashioned rolled oats*. After arriving home Linda discovered that she only had ground flax meal stored in her freezer and not whole seeds. Not wanting to wait one moment longer to make this recipe, she forged ahead with what she had on hand. I suggested that she might want to add a little more water to compensate for the ground flax meal, which she added. Much to her relief the substitutions worked well. Now she's on cloud nine making buttered toast and open faced sandwiches with a variety of toppings. She agrees with the sentiments being expressed around the internet... this is indeed life-changing bread.
Our source material was David Lebovitz/Josey Baker, My New Roots, Bojon Gourmet, and Jennifer Grey. Yes, that Jennifer Grey of Dirty Dancing fame. We've also happily prepared the cracker recipe by Sarah Britton of My New Roots. I am partial to carrying the crackers in my purse for an on-the-road snack. —Michelle

* Oats are a gluten-free grain, but are often milled with wheat and can be possibly cross-contaminated in the milling process. Gluten-free oats are labeled as such.

Spray oil, such as coconut

Procedure:
1. Line a bread pan with parchment and lightly spray with coconut oil.
2. Preheat oven to 350°F. Toast seeds and nuts in the oven for about 10 minutes until fragrant and lightly golden, tossing with a spatula half way through the cooking time.
3. While the seeds and nuts toast, in a large bowl mix the remaining dry ingredients. Add the toasted seeds and nuts to the mix and stir. Add the wet ingredients and combine well. At first you will think you added too much water. Stir for about 30 to 60 seconds and you will be surprised at how quickly the oats absorb the water and the chia becomes a creamy, gel-like texture, acting as a substitute for gluten which is the wonder of wheat-based breads.

4. Transfer the mixture to the lined loaf pan and gently smooth the top into a dome shape. Cover at let sit at room temperature for a minimum of 2 hours or for much longer rests, refrigerate up to 24 hours.
5. If you refrigerated the loaf, bring to room temperature before baking. Position a rack in the center of the oven and preheat the oven to 400°F. Bake bread for about 1-1/4 to 1-1/2 hours. The loaf will be golden brown and smell of toasted deliciousness.
6. Let the bread cool at room temperature for 2 hours before removing from pan. Discard parchment.
The bread keep well, wrapped tight and refrigerated, for at least a week. This bread is divine toasted—it's a must. The bread is so dense that it needs the toasting to bring out the full flavor. Slice into 1/2 inch thick slices and toast for ten minutes (yes, ten!)

This is the highly sought after high-fiber bread that Linda made while working at the Los Olivos Grand Hotel in the 90s. A collection of favorite recipes Linda regularly produced for breakfast and afternoon tea, includes: All-American Apple Pie, Old Fashioned Berry Crisp, Creamy Rice Pudding, Cheesecake, and Chocolate Macadamia Nut Praline Tart,

Procedure:
1. In a mixing bowl combine yeast and water and let dissolve. Add molasses, honey and oil and let yeast proof. Mix in the bran flakes, whole wheat flour, poppy seeds sesame seeds, sunflower seeds, and salt. Knead the dough by mixing well on medium speed. Remove the dough from the mixer and with your hands knead into a ball. Transfer dough to a lightly oiled bowl and let rise until doubled in volume, about 1 hour.
2. On a floured board gently punch the dough down and knead well. Divide the dough in four equal parts and shape into four even loaves. Let rise again until double the volume.
3. Bake in a preheated oven at 350°F for 45-50 minutes. Let the loaves cool on a rack. 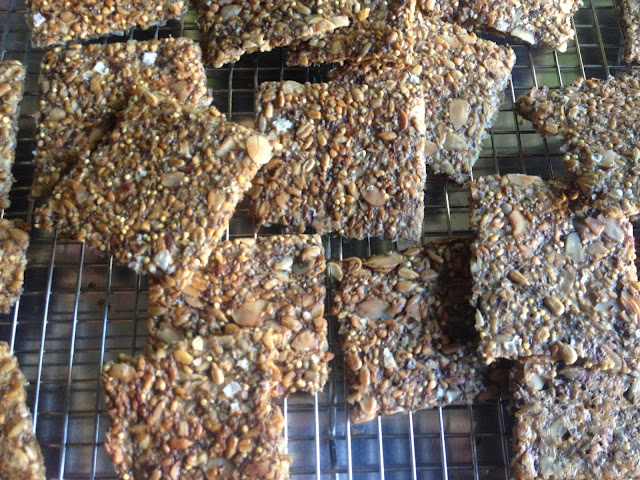 Posted by Salvation Sisters at 4:51 PM