"Discipline is the bridge between goals and accomplishment." ~ Jim Rohn

Continued from my Whole30 Challenge Journal:

I wake up feeling thinner. I resist stepping on the scale to see my progress. That will have to wait another three weeks. Jay offers to make us scrambled eggs with diced sausage. I accept without skipping a beat. I draw a comparison to driving. Sure I like to drive, and I drive my car all the time, but if someone offers to get me from "here" to "there", I say good on ya. I like to be chauffeured. If Jay wants to make breakfast I will not jump in and say, no honey, let me do it. Please clean the dishes too, but that rarely happens. A girl's got to take what she can get.
Later on in the day lunch takes two seconds to dish into a bowl and eat with a fork. So far today is easy peasy with no food cravings. I'm not hungry between meals.

The Thai Shrimp Bisque took a little longer to prepare than I would have liked during a weeknight. I take 388 photos for the forthcoming blog post. I'll need to cull the photos and select about 8 to 10 images to publish online. Since it took longer than expected to put dinner on the table, there is no salad or accompaniments. Egg rolls would have been nice (made with rice paper, of course). I figure with the coconut milk in the chowder our main course will be filling. Jay particularly misses sourdough bread with the chowder. My husband looks a little crestfallen, but he holds to his commitment to Whole30 (it's now become a verb) for one month, even though there is a loaf of sourdough on our counter for Maddie. He could have popped a slice into the toaster and to his credit, he refrained.
I joke that I should have made cauliflower garlic bread. Yes, there is such a thing. It's from the same guy who has a cauliflower bagel recipe on his blog. Jay responds by riffing on the SNL skit from eons ago that has Dan Aykroyd and Gilda Radner debating whether New Shimmer is a floor wax or a dessert topping. Chevy Chase wraps the skit by claiming in his assured tone, "New Shimmer for the greatest shine you ever tasted." Cauliflower, it's a vegetable, it's rice, it's mashed potatoes and a bagel. It's the chameleon of the vegetable world.
Continuing on with the assessment of the bisque, Maddie comments that she finds the soup strongly flavored and not suitable for an entire meal. I could see that coming from a mile away so it rolls off me. Next time, she recommends, I should serve the chowder in a smaller portion as a first course. Half her portion is left in the bowl, essentially making her main course a first course. Jay asks Maddie if she plans on finishing the bisque and she responds by shaking her head no. I think he's going to eat it all. Instead, he picks up the big glass cup and begins spooning through the opaque bisque to find any remaining shrimp. There's only two. For someone who doesn't particularly care for shrimp, she manages to eat almost every one in her bowl. Jay's disappointed. I let him know there's more shrimp in the soup pot but he doesn't feel compelled to rise and dish up more. Maddie peels and eats a banana. Yes, I have a food blog. But, that doesn't mean my child loves everything I prepare. You know me, I like just about all foods. I will definitely be reheating the leftovers for lunch tomorrow.
My only fallback today is the amount of honey I've consumed between my coffee and the Curry Chicken Salad. There's a little rice flour in the bisque that acts as a thickener, because... well, I wanted bisque, not soup.

I almost went the lazy route and reheated leftover frozen meatballs. I love meatballs because they can be cooked once and eaten multiple times. The fully cooked meatballs can be pulled directly from the freezer. I drop the amount needed—figuring 3 to 4 meatballs per person—into marinara and slowly reheat while I round out the meal. I'm just about headed down easy street, when it dawns on me that I have portobello mushrooms lounging in the refrigerator taking up space. Like guests that overstay their welcome, they need to go. I pretty much only eat stuffed mushrooms at Oregano's Pizza Bistro, so I decide I'll do my best to do a copy cat recipe, but with more veggies tucked in because I have a truckload in my refrigerator that we need to eat through by the end of the week. Waste not, want not is the wisdom of our forefathers. 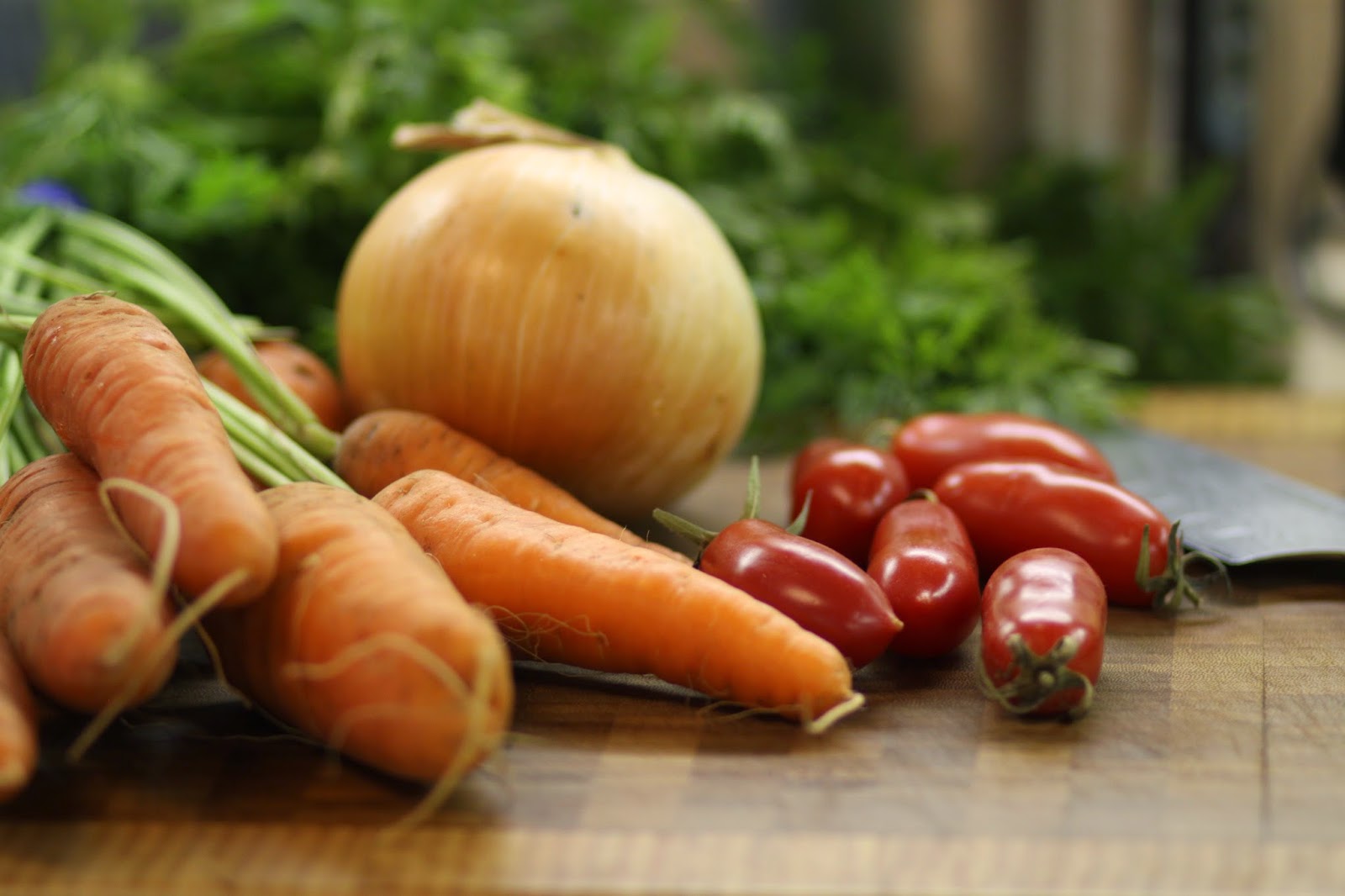 The mushrooms are really easy to prepare. It's practically a one pot meal except that the mushrooms need to go on a baking sheet and bake in the oven for a quick 20 minutes. While the mushrooms are baking, I quickly make Caesar Dressing with homemade mayonnaise made with a stick blender. While I'm scrambling at the end to wash, dry and cut a gorgeous head of romaine lettuce, I call Maddie down to set the table. Jay wanders into the kitchen soon thereafter and says dinner smells great. The aromas of cooking sausage had wafted up the stairs and into his office making him hungry. They both ask suspiciously if there is cauliflower hidden anywhere in the meal. To their collective relief I respond with my least favorite word, no. Some people might say it is my favorite word because in an act of feminism several years ago I taught myself how to say no to a whole bunch of things. Women are taught to say yes. Sometimes it's beneficial to say no.
Stuffed Portobello Mushrooms is a Maddie approved meal. She ate every bite and had two helpings of Caesar Salad. Jay summed up Maddie's thoughts by saying I could make that meal whenever I want. I earned two thumbs up. Hooray. I labeled dinner a success, too. Maddie even said that she'd try a cold stuffed mushroom in her lunch tomorrow. If you like cold pizza, you might just like a cold stuffed mushroom cap filled with sausage and vegetables.
For today's missteps, Jay once again put a helping four bean salad on both our salads. I ate it knowing that the Earth would still spin on its axis if I swallowed the marinated beans. Even though I'm supposed to be abstaining from cheese, I did top the mushroom with parmesan and mozzarella. I can't imagine a Caesar Salad without parmesan cheese, so I followed my traditional recipe. In the future, an antipasto-style salad would be a nice pairing with the mushrooms, especially when dressed with an old-school-style Italian vinaigrette.

Day 10
Breakfast: Two Fried Eggs
Lunch: Greens with Chicken and some Vegetables and Lemon Dressing
Dinner: Chipotle— "Burrito Bowl" with Steak and Guacamole and (No Beans!!!)

Up and at 'em early to drive to Phoenix for a nine o'clock meeting. Upon rising, I look out to the Tucson Mountain range. It's completely dark outside, but I can see from the luminous light of the moon that fog has creaped in once again and settled over the city. The misted humidity creates a fairy tale effect of other-worldliness. The occurrence of fog is extremely rare in the desert and I savor it.
In the car, I drive for many miles before I notice that it is quiet in the car. I have failed to turn on the radio or plug in my iPod to listen to an audio book. Passing by cotton fields in Marana, a developing community near Tucson, the whispy fog hangs low on the brown skeleton of plants, some still displaying tuffs of cotton balls on the tips of branches. Two old tractors sit idle in the field and I wish I could stop to capture the bucolic scene and put a new spin on fifty shades of gray in the rural agricultural area between Tucson and Picacho Peak—a stretch of highway lined with Pecan trees. The fog is dense all the way through Casa Grande and visibility is low, but the 18 wheelers continue to roll at 75 miles an hour. Just before Phoenix, an invisible line is crossed, and I break through the fog. In my rear view mirror, the fog looks like an infinity wall reaching towards the sky. Phoenix is ahead, tall buildings refracting light from the rising sun.
Around noon I am invited to attend lunch with a visiting customer who is signing-off on a piece of equipment that my employer built to spec. Apparently everyone is in the mood for Mediterranean food and I find myself perusing the menu at Pita Jungle. Normally, I'd enjoy some hummus ladden entrée, but it is not to be. No tabbouleh. No pita. No shawarma. No falafel. No anything except for a salad with chicken and lemon dressing. Woe is me.

I leave Phoenix late and by the time I arrive home it is dark and I am hungry. Maddie greets me at the door in sweats and a t-shirt. "Go change," I say— we're going out. I definitely don't feel like cooking. I just feel like eating, then curling up in bed and reading for awhile. Maddie's confused. Where can we possibly go eat that will meet my diet restriction? We'll figure something out, I say. As a family, we strive to only eat one meal out a week, so dining out on a week night is rare. We decide on Chipotle. I order a burrito bowl with a smidgen of rice on the bottom. I forgo the beans and then pile on steak and guacamole and every vegetable available along with a giant serving of pico de gallo. It's actually pretty tasty.
Back at home, I've caught a chill. I climb into bed but instead of reading Olive Kitteridge, I decide to spend time with Tony Bourdain in Quebec for another episode of Parts Unknown. The episode is fascinating but a little nauseating to watch on a full stomach. Tony plows down hearty food with the rambunctious Joe Beef guys. I alternate between curious fascination and aversion watching them plow down course after course of rich fare over multiple days. I still can't seem to get warm, even though I am under a blanket and a comforter. I turn over on my side to curl up. In two seconds I'm dead asleep with both the bedside table lamp and TV on. I awake to my husband and daughter staring at me. I can hear mild laughter escaping their mouths. I see Maddie through my squinted eyes. She is entirely amused, face glowing, lips stretched into a laughing, mischievous grin. Apparently my snoring can be heard throughout the second story. I rarely snore and I'm not amused by being the butt of whatever joke that is shared between Jay and Maddie. I'm also not happy that I have to rise and brush my teeth (what? Are you f*%&ing kidding me?) and wash my face and then go back to bed. Once my personal maintenance is completed, I fall back to sleep almost immediately and I sleep restfully all night.

My Whole30 Challenge continues—follow my upcoming adventures in healthy eating during the month of March.

Posted by Salvation Sisters at 12:21 PM