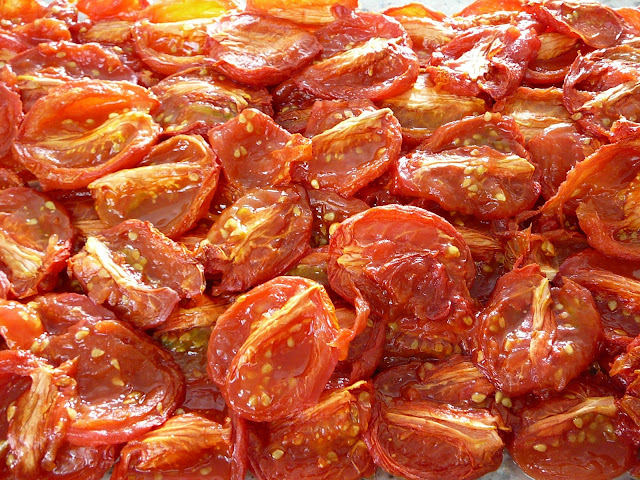 I have served these tomatoes as part of an antipasti tray, in winter salads, and alongside eggs and fried potatoes for Sunday brunch. Although more often than not, I prefer to use the tomatoes in a delicious Tomato Gratin to serve with Grilled Beef Roulade and Parsley Chimichurri.
Oven-Dried Tomatoes

Oven temperatures vary, so your tomatoes may bake faster or slower than what's called for in the recipe. The longer and slower you can dry the tomatoes, the better, because the flavors become more concentrated the longer the tomatoes bake. As Chef Bob Kinkead advises, "Through this process, normally bland winter tomatoes become fairly edible and summer tomatoes become super intense, delivering an out-of-this-world taste experience."
Chef Bob Kinkead opened his restaurant in 1993 in the historic Foggy Bottom area of Washington DC, near the White House. This recipe is sourced from Kindkead's Cookbook (Ten Speed Press, 2004) by Bob Kinkead. 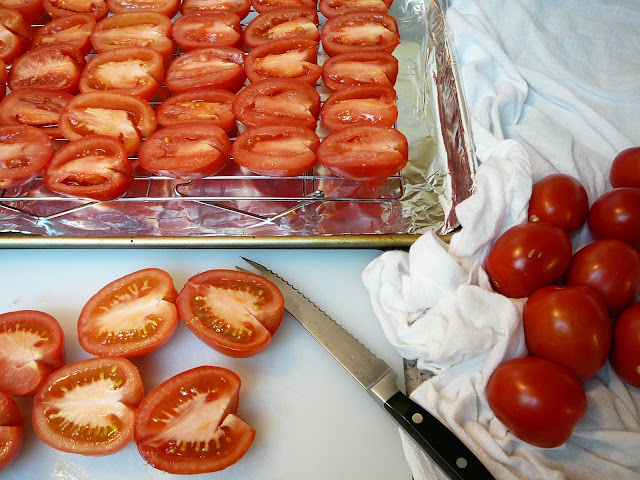 2. Cut the tomatoes in half and remove the stem core. Gently squeeze out most of the seeds and place the halved tomatoes closely together, cut side up, on the baking racks.
3. In a small bowl, combine the salt and sugar. Sprinkle generously over the cut side of the tomatoes. Let the tomatoes sit for about 30 minutes at room temperature. The salt and sugar will help draw out the moisture in the tomatoes.
4. In the meantime, preheat the oven to 225ºF. Transfer the cookie sheets to the oven. Bake the tomato halves for 3 to 4 hours, checking about every 30 minutes. Rotate trays half way through for even baking. The tomatoes are done bakings when they start to shrivel but are not completely dried.
5. When cook enough to handle, turn the tomato halves over and gently peel away the skins.
6. If you like, in a bowl, dress the tomatoes with the olive oil, freshly sliced garlic, black pepper and fresh thyme. Delicately layer the tomatoes in a flat container and refrigerate for up to 4 days. Because all the moisture is not extracted, the tomatoes will spoil.
Posted by Salvation Sisters at 10:22 AM