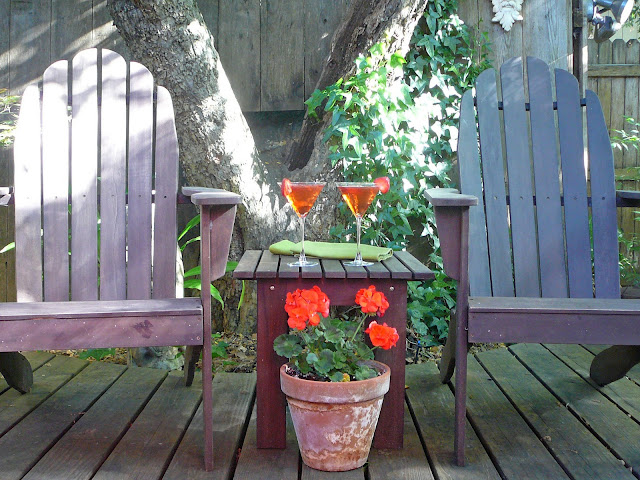 Salvation Sisters turns one this weekend! So before we celebrate with Fragolino Martinis, I thought I would share the story of how our sisters' blog came to be.
Michelle and her daughter, Maddie, (plus one large and hairy poodle named Django) arrived at my house in Guerneville, California on the last day of July in 2009. Coming to my rescue, they pulled into my driveway in a white Toyota 4Runner that was nearly bursting at the seams with everything that they would need for their stay in California until their house sold in Arizona (the selling of which, my brother-in-law Jay, was overseeing back in Tucson).
It was our hope that the house would sell in a few months time, at most. At the conclusion of the sale, the plan was for all of us to relocate to the lovely city of Petaluma, which is about an hour south of here. If you read our blog regularly, you will already know that, like the proverbial "best laid plans", this did not happen. ﻿

I say that Michelle and Maddie were coming to my rescue, because my son Joshua, who was in the Special Forces in Afghanistan, had died in January of that year. I was alone, struggling with my sadness and grief, and the arrival of Michelle and Maddie was just the medicine that I needed to help see me through this very sorrowful time.
Michelle's plan upon arriving, was to sort through an enormous archive of e-mail that we sisters had been writing to one another for a decade, and to create a novel out of it. We believed, and still do, that there is a book just waiting to be created out of our correspondence, but as it so happens, our blog was born first.
Summer was pretty much over by the time Michelle and Maddie took up residence here in Sonoma County, and after after two months of rather mild fall weather, winter set in with a vengeance. On an early shopping trip right after their arrival, I had encouraged the purchase of rubber rain boots and down vests and jackets. Despite my assurances that they would get much use out of the items they were purchasing, I could still see that they both remained doubtful about the necessity of such gear. ﻿

It took only until November to arrive and they could see that they were in for days upon days of rain and dreary gray skies, not to mention the damp cold that settled in Guerneville, being that we were situated right across the street from the rain-swollen Russian River. This soggy river bottom is very wet and chilly in the fall, winter and spring. Being that they had become accustomed to the very mild winters experienced in the southwest, winter in Northern California quickly became a rather demoralizing trial, and adding insult to injury, Django started experiencing recurring ear infections. ﻿

Michelle spent the winter of 2009 swaddled in layers of winter apparel, sipping cup after cup of steaming hot tea or coffee, she began the daunting and tedious process of transferring year upon year of our voluminous e-mails into a single document. The amount of written material was staggering, and it was the new year before she was done. As she sat at the computer day after day, with a red wool scarf encircling her neck and the tips of her fingers peeking out of fuzzy mittens while she typed, she began to consider another possibility.
We sisters has also been interested in the idea of compiling a cookbook of all of our recipes accumulated from years of cooking for family and friends, as well as professionally. There have been many requests for our recipes, and yet, we rarely shared them, thinking we would save the material for our cookbook. So one day in early 2010, Michelle posed the idea to me of creating a blog. This thought hadn't occurred to me, and I don't recall being all that enthusiastic about the proposed project.

My lack of interest, however, did not stop Michelle. She began the process of investigating blogs, and how to create one. Michelle, Juliette and I agreed that our philosophy is indeed "the more you share, the more you have", and so Michelle's idea of creating a sisters' blog took on momentum. We decided to start giving our recipes away for the first time, and telling the stories behind them. Pineapple Martinis "aka Happy Juice", became our inaugural post on March 28th, 2010. Seventy-seven posts later, a year has passed, and naturally with the passing of another year, many more changes in our lives.
The house in Tucson did not sell, and it seemed the best option for Maddie and Michelle (and Django with his ear troubles) to all return to Arizona. With more than a few tears, I watched them drive off one year later, this time the 4Runner requiring a black canvas carrier strapped to the top of the truck for the trip back to Arizona enabling the tranportation of more things acquired during a year's stay in California. 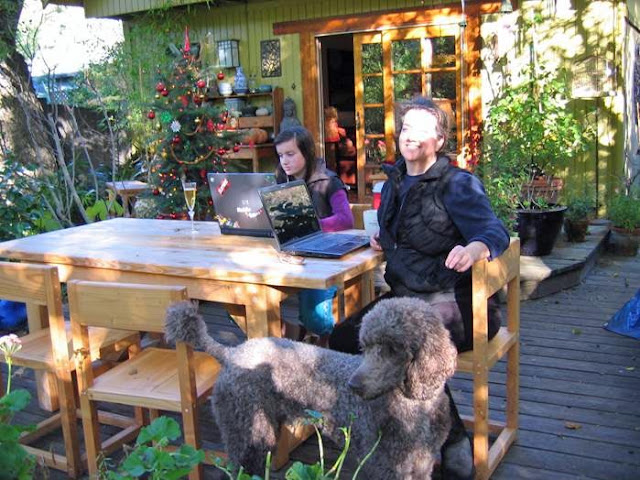 We practically lived in our vests - day wear, evening wear.

I honestly didn't know if the blog would survive our separation. Just a few months old, maintaining the blog would require the need to collaborate remotely. Happily it has not only survived, but it and we, are thriving. Michelle, Juliette and I are now back to our original arrangement of spending lots of time on the phone with each other, and trading e-mails and photos back and forth to stay in our usual close communication. With the love and support of my sisters, family and friends, I feel stronger everyday, and I will forever be grateful to Michelle and Maddie for their year spent here with me. Sharing the burden of our collective grief has helped us all, especially me, to heal from our great loss.
Salvation Sisters, the blog, has become a part of our daily lives, and to our delight and amazement, our readership has grown steadily over the year. For our first birthday post we are sharing our recipe for Fragolino Martinis. Our post called A Trio of Fruit Liqueurs: Limoncello, Fragolino and Frambolino has been our most popular post to date, and a cocktail recipe seemed apropos for our birthday celebration.
﻿
As an additional birthday present to ourselves, Michelle, Juliette and I have each purchased new cameras in hopes of being able to provide even better photos for our blog. As I write, I am waiting for the UPS driver to walk up to my front door with my new Canon EOS 50D 15.1MP SLR digital camera!
Michelle, Juliette and I would like thank you for your interest in our stories, and hope you continue to enjoy making our recipes and reading about the further adventures of the Salvation Sisters.

P.S. We love your comments and feedback, so please keep them coming! And remember, just click on any of our photos to enlarge them. 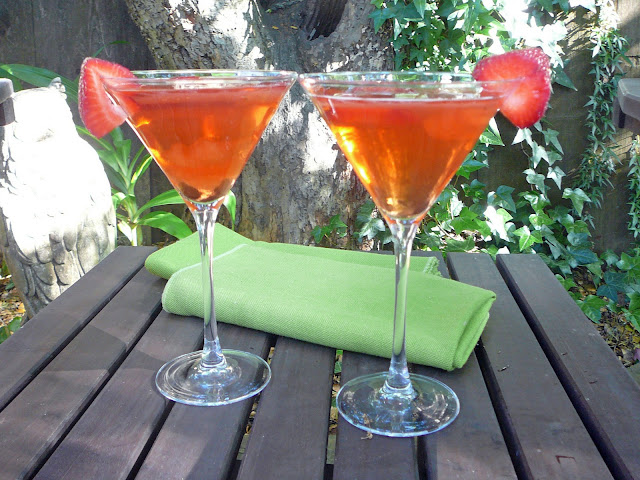 I completely understand being too busy to take on the onerous task of making homemade Limoncello. Limoncello is an endeavor not to be taken lightly, or to be attempted by the uncommitted, or when lemons are out of season. Fragolino, however, can be made with ease at any time of the year.
Simply purchase frozen organic strawberries and a nice quality vodka, and you are in business. This simple cocktail can be made from your own homemade Fragolino, or from Fragolino purchased at your favorite seller of spirits (but it won't taste nearly as good).
Bartender's tip: Make an extra serving of the cocktail ahead of time and freeze it. The frozen cocktail can be scooped by the spoonful into your freshly made cocktail to keep each serving nice and cold without any dilution of the cocktail. 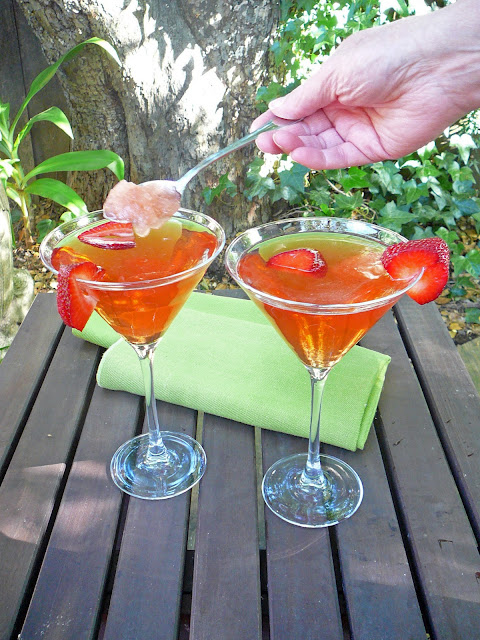 Procedure:
1. Juice one large lime.
2. Pour Fragolino into a Pyrex glass measuring cup to the 200 ml line. Then pour in the Triple Sec to the 250 ml line. Pour the Fragolino and Triple Sec into a cocktail shaker along with the lime juice. Add a good amount of ice to the cocktail shaker and shake vigorously. When thoroughly shaken, split between two martini glasses and garnish with fresh strawberries. Add a large spoonful of frozen Fragolino cocktail to each glass and serve immediately. 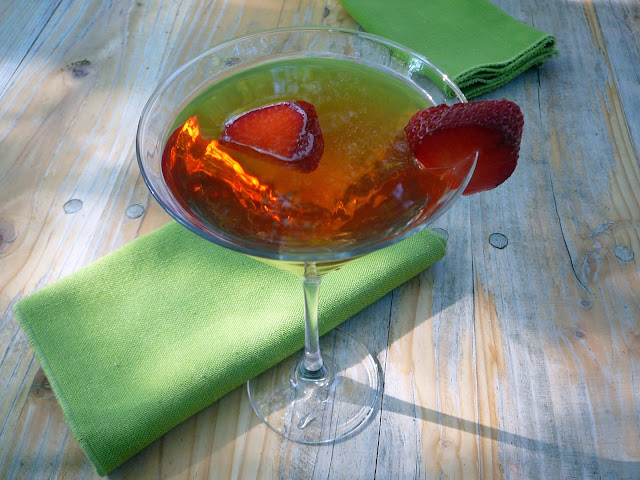 Posted by Salvation Sisters at 10:32 AM