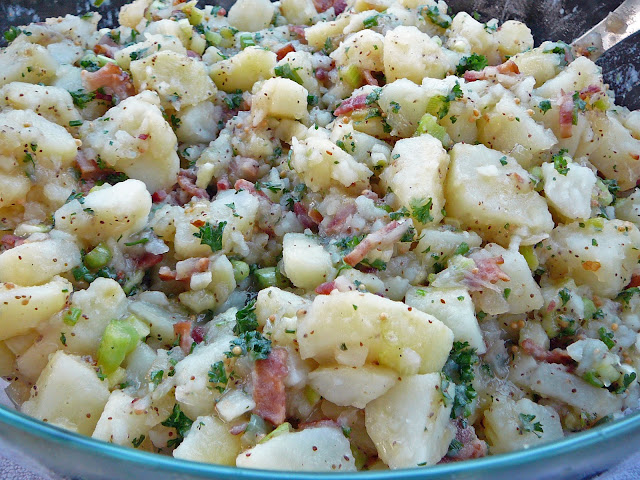 This is the time of year when we traditionally give thanks. When I count my blessings, my dear friends, Stephanie and Michael and their two girls, are high on the list - let's just say in the first paragraph on the first page.
When my family and our German au pair, Barbara moved to Tucson, it was not long before Michael, pregnant Stephanie and their oldest daughter moved in to the house next door. We quickly progressed from chatting over the backyard fence to exchanging stories over our dining room tables. Over time, our families moved from the old neighborhood, but not too far. We happily only live ten minutes apart, making it easy to get together regularly. 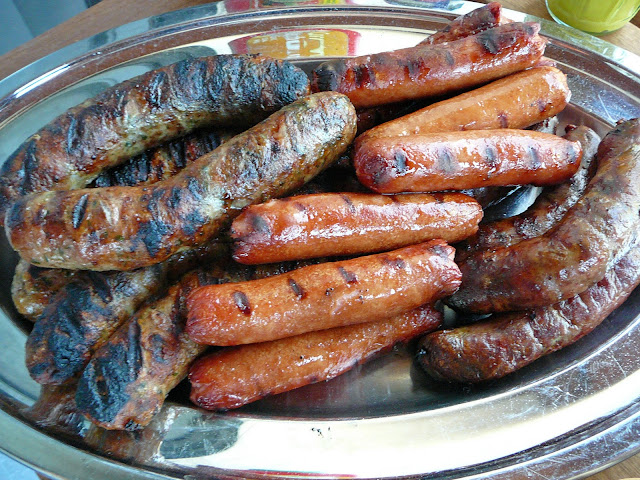 Michael arrived in America from Germany via Canada. Michael and Stephanie met at university, and the rest, as they say, is history. As I mentioned, when we first met our new neighbors, we had Barbara living with us. She hailed from Bavaria and signed-up for a one year stay with us, her American "host family" where she could steep herself in American culture while helping to care for our daughter. It was quite the adventure for Barbara living six months in the Bay Area and then spending the final six in Tucson. Talk about culture shock. Barbara was delighted to meet Michael with whom she could speak German.

During her final month, Barbara's family - all of whom didn't speak English - stayed for a brief visit before beginning a two-week "travelcation" across Arizona and into Barbara's former stomping grounds in northern California. We were just getting to know Stephanie and Michael, and I asked him to come over (Stephanie was out of town) for dinner for the first time and he helped with translations throughout the evening.
I made a traditional Mexican dinner of beef tacos, salsa fresca, refried beans and rice. I suspected that German's don't typically eat with their fingers because there was much trepidation over how to garnish and eat the tacos. We definitely led by example, picking up the tacos with our fingers, taking a big bite, then smiling, noding our heads in the universal sign of "yes". We likely flashed the universal thumbs up sign for additional reinforcement. 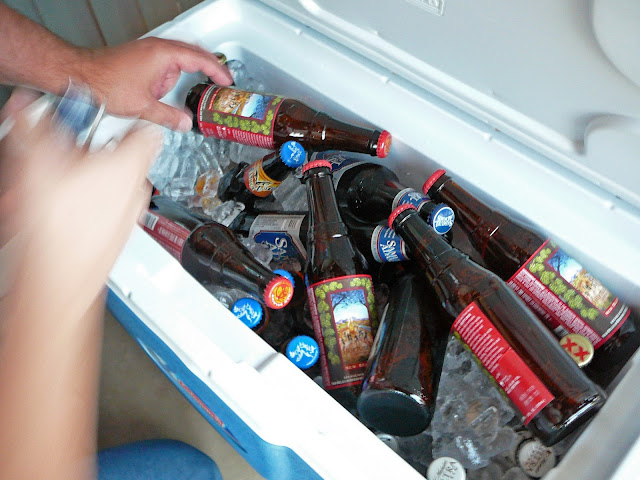 Before we got around to those tacos, we were sitting outside at the patio table washing down bites of chips, salsa and guacamole with margaritas when my Mom arrived. Unlike her daughters, Mother was elected Senior Class Secretary and voted Homecoming Queen.
With her bright attitude a little thing such as not speaking German was hardly going to stand in her way of making a good first impression. Mom walked up to Michael first, introduced herself, speaking very slowly, in that stereotypical fashion, as if somehow speaking English in an overly annunciated manner will magically bridge the communication gap.
The ever gracious Michael responded back, in a normal inflection, "Nice to meet you, Dede. My name is Michael. I'm the next door neighbor."  Mom, who was embarassed, sputtered a reply, turned bright red, and it got everyone to laughing, the Germans and the Americans alike. The language barrier aside and tequila to soften the edges, we all had a good time. 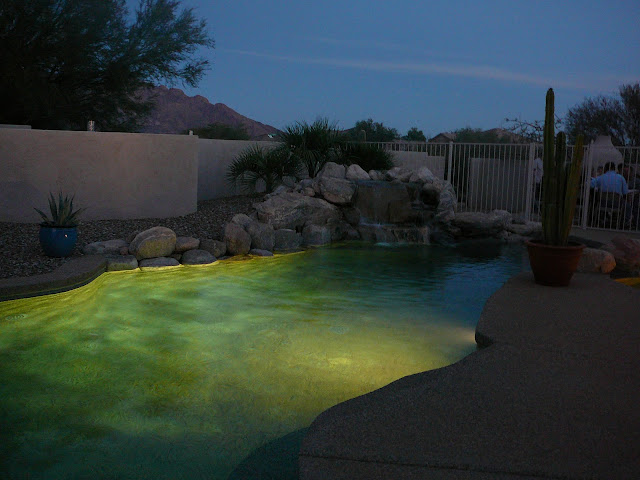 Stephanie and Michael have talked about having an Oktoberfest party for years, and this year was finally the year. Stephanie mentioned a month or two ago about making a German Potato Salad for the party, but didn't have a recipe. I'm one of those people that are forever clipping recipes and adding them haphazardly to overly filled three ring binders.
Particular recipes will stay in my mind and I quickly recalled the story of Bebe Roederer, a grandma in Louisville, Kentucky who finally wrote down her grandmother's recipe, identifiying the correct measurements of the ingredients, so the family could make it for generations to come.
I rifled through my binders and finally put my fingers on the newspaper clipping. I scanned and e-mailed it to Stephanie. A few weeks ago she called and asked if I would make the salad because she would be busy preparing spätzle, strudel and German-style red cabbage, plus everything else one needs to do when throwing a party for 60 friends.
I was already planning on baking rolls and I liked the idea of making the salad, too. Although I make untested recipes for my own dinners and parties, I wasn't fond of the idea of making German Potato Salad for a large party without testing it first —especially since the host is German. 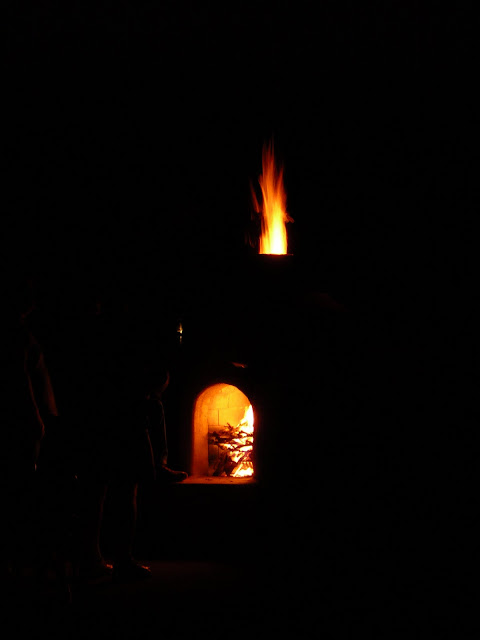 After looking at additional recipes on-line, I decided to change a few things with the recipe I had in hand, such as adding mustard seeds, celery seeds, scallions and parsley. The original recipe called for raw onions, but I opted for slow cooking. My first attempt was good, but I fried the bacon and made the sauce in a cast iron skillet which turned the dressing rather dark. My daughter looked at the photograph in the clipping and then at my salad and noted, somewhat unapprovingly, that the two looked nothing alike. True, but we were all going to get our iron for the day in one serving of potato salad.
Yesterday, I refined my version further and I was quite pleased with the final result. One guest declared it the best German Potato Salad she had ever tasted (much to my delight) and many asked for the recipe. Most importantly, I received Michael's seal of approval - the best compliment of the evening. I hope Stephanie and Michael's Oktoberfest will become an annual event. There is nothing else quite like sitting outside on a temperate desert evening, a fire in the kiva, good friends swapping stories (yep, we reminisced about that first meeting with my Mom) while a full moon rises over the Catalina mountains, assorted beverages within arm's reach.  I will definitely make this salad for many years to come. And to future generations, please feel free to make it too and to start your own annual traditions! Guten Appetit! 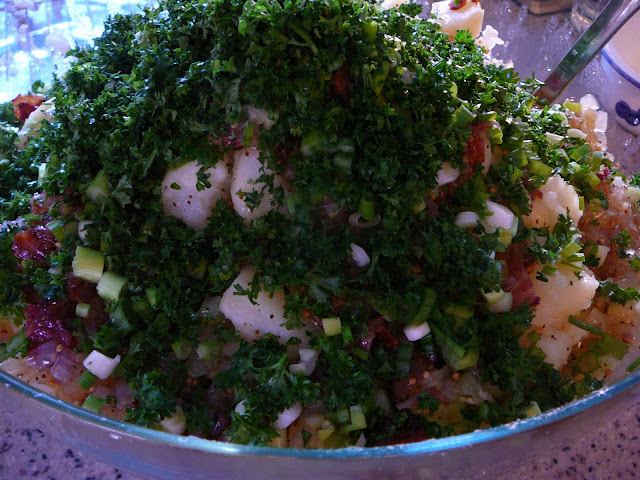 This recipe can easily be doubled - you'll just need a rather large serving bowl. IKEA is a good source for inexpensive glass bowls of all shapes and sizes. 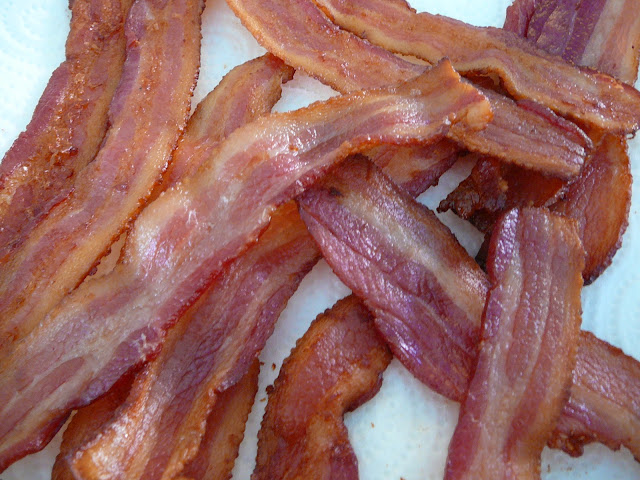 1. Follow the directions for Oven Fried Bacon. Pour the rendered bacon fat into a liquid measuring cup. There should be a little less than 1/2 cup. Set aside. Drain the cooked bacon on paper towels.
2. Place the potatoes, with skins on, in a large pot. Fill the pot with cold water to cover the potatoes by one inch. Cover the pan with a lid, and bring to a boil over high heat. Once the water is boiling add 1 tablespoon kosher salt. Let the lid rest ajar on the pot, and reduce the heat to maintain a robust simmer. 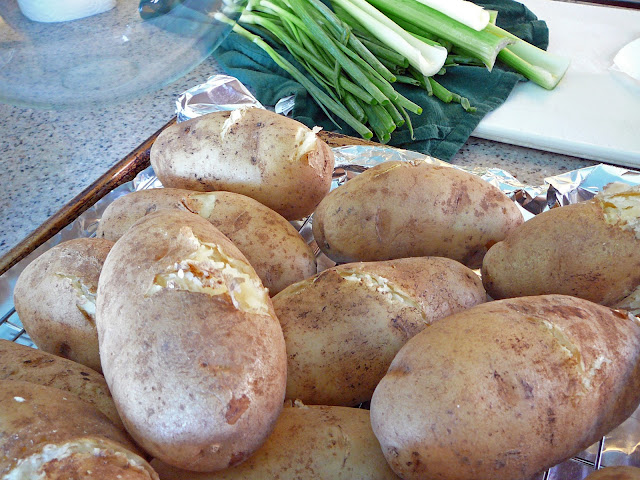 3. Cook until the potatoes are just tender, enough to pierce with a skewer or fork about 20-30 minutes. If the potatoes are over-cooked they will crumble in the salad. Remove the cooked potatoes, to a cooling rack. Let sit until cook enough to handle.
4. In the meantime, a heavy bottomed large pan, heat 2-3 tablespoons of the rendered bacon fat. Add the diced onion, chili flakes, salt and pepper. Cook the onions long and slow over low heat until nicely caramelized, stirring often. 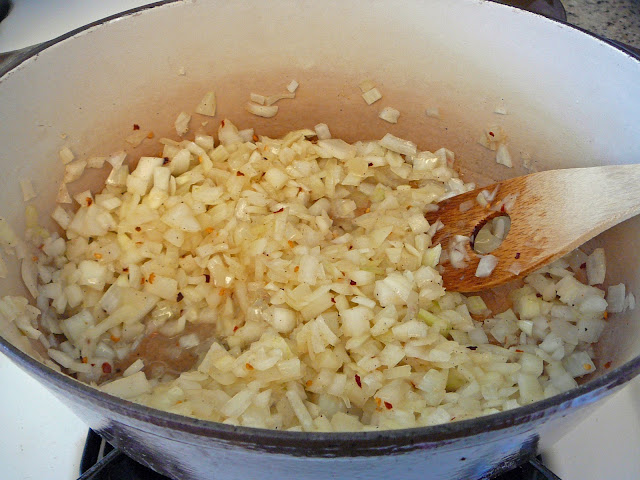 5. Prep the celery, scallions, and parsley. Chop the bacon into bite-size pieces. Set aside.
6. Using a pairing knife, remove the skins from all the potatoes. Cube each potato and cut into bite-size chunks, transferring the potatoes to a large bowl, as you work. Piled together, the potatoes will stay warm.

7. To make the dressing: To the caramelized onions, add 1/4 cup rendered bacon fat, and heat until hot. Add the celery seed, mustard seed, and flour stirring for 1-2 minutes. Add apple cider vinegar, water, and sugar. Continuing to stir, bring to a boil over medium-high heat and boil for 1 minute, to make sure the sugar
is completely melted. Immediately, pour the warm dressing evenly 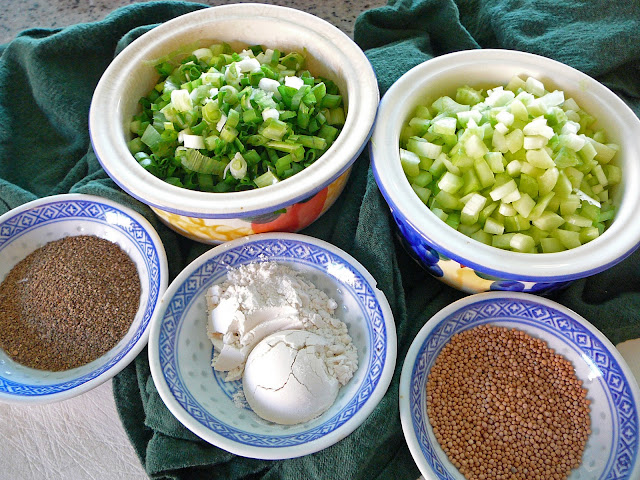 over the entire surface of the sliced

potatoes. Let sit for 10 minutes without stirring. Add the celery, scallions, parsley and bacon.
8. Toss gently to distribute all the ingredients and dressing. Taste. Add more salt and pepper, if needed. Makes 12-16 servings. 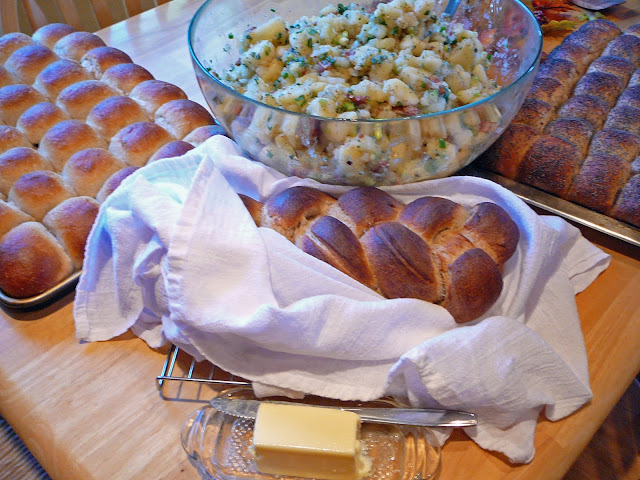