Cooking for the Stars and Old Fashioned Berry Crisp

Professional cooks love to talk about their successful dinner parties and catered events, but what about when a gig goes awry? Back when I cooked professionally in the Santa Ynez Valley, I did some catering and private chefing. Here is my tale of a less than spectacular salad and main course, that was saved by a good Old Fashioned Berry Crisp and our family's Lemon Ice Cream.
The Santa Ynez Valley, about a two hour drive north of Los Angeles and just over the Los Padres mountain range from Santa Barbara, is a network of small communities, including Solvang, Los Olivos, Ballard, Buellton and Santa Ynez, that gives refuge to celebrities who seek privacy. They buy huge ranches situated in glorious landscapes of pastures and rolling hills accented by ancient sprawling oak trees and expansive vineyards.


One summer day in 1995, I received a call from Ray Stark who had my name recommended to him through a mutual friend. Ray Stark was a famous Hollywood producer back in the day, and owned Rancho Corral de Quati, a 300-acre ranch in Los Olivos where he was a breeder of Thoroughbred racehorses. In his days in Hollywood, Ray worked with some of the biggest names in the business, and he amassed a fortune before he died in 2004.
I was about to meet a few of his famous friends, because Ray told me he was planning a casual dinner at his ranch for a few guests, one of whom would be Kirk Douglas accompanied by his wife, Anne. Ray let me know that he did not want the menu to be too fancy. He was fairly vague as to his menu desires other than to request fish as an entree for eight, which honestly threw me a little bit, because I knew the timing on cooking fish for a group of eight would be tricky. I can remember feeling the pressure was on. I would meet the challenge. I had hit the big time. I was going to be making dinner for Kirk Douglas—how exciting!


On the day of the dinner party, I showed up at the ranch with a car full of everything that I would need for the evening, including my boyfriend Richard in tow, who graciously agreed to act as bartender when Ray made the last minute request that I bring someone to circulate and pour wine. Little did Richard know that he would uncork a bottle of Château Lafite Rothschild, that afternoon which he poured a little too liberaly in the beginning until he was given a "little coaching" on the matter by the guest who brought the wine for all to try.
While I was unpacking all of the food and gear, Kirk Douglas breezily walked into the kitchen with a warm smile and offered me his hand saying, "Hello, I am Kirk Douglas." Flustered doesn't even begin to cover how I felt although I managed to return his smile. I hope I acted like a normal human being even though I was alone in a room with a living legend. "I think Ray keeps the Stoli in here," Kirk said as he proceeded to open the freezer compartment. Quite unassumingly he prepared himself a drink, acting as if we were old friends. I remember thinking that if I were ever famous, I would want to behave like that man. I liked him instantly.
The rest of the invitees included the very endearing John Forsythe (who had become widowed the year before), and his dinner date turned out to be a client of mine (a nice surprise), Bernie Taupin (longtime collaborator with Elton John), and his wife at the time, Stephanie Haymes, an owner of the opulent Cicada restaurant in Los Angeles, and rounding out the party, Ray's girlfriend.
My first mistake in choosing the menu was deciding on a leafy salad tossed with a spicy fresh garlic vinaigrette and accented with red nastursiums and fried sliced garlic. Note to self, not everyone loves garlic as much as I do. Especially if most of your guests are over the age of sixty. Apparently folks don't really enjoy munching on edible flowers—then or now. The individually plated salads were gorgeous but went mostly uneaten by some of the guests, much to my disappointment. Kirk actually told me, in a kind manner, that he didn't eat garlic, which was a cue for me, the one with the rapidly sinking heart, that he's wasn't going to appreciate the entrée either.


I remember vividly, and embarassingly, that Stephanie was less than thrilled with my down-home fare. Years later I can still feel the red hot intensity of the color rising from my chest up to my cheeks when she turned up her nose at my Halibut Provençal resplident with fresh tomatoes, kalamata olives, fresh oregano and of course, more garlic. Her comment to another guest was that her chef was "doing marvelous things" with infused oils. Looking back, it wasn't that thrilling of a dish, and went mostly unremarked upon by the guests.
In spite of my ego taking a beating that night, I still remember how fun it was for me to be able to listen in on the dinner table chatter about Hollywood and the gossip of the day. I am pretty sure that particular occasion is as close as I will ever get to hobnobbing with the rich and famous. Although, if there is ever a next time, I hope to be handed the over-poured glass of Château Lafite Rothschild.
In the end, I did save the day. Dessert to the rescue. I redeemed my lackluster dinner with the presentation of a juicy, ooey-gooey Old Fashioned Berry Crisp served with our family's much beloved—by everyone who has every tasted it—homemade Lemon Ice Cream. I still remember the gleam in Kirk Douglas' eyes when I confirmed that, in fact, yes I did make the ice cream myself. I could lift my head proudly again when he asked for "a little bit more of that amazing ice cream". Yep, that's right, Catherine Zeta-Jones, the recipe follows. You too can bring the homemade Lemon Ice Cream gleam to your father-in-law's eyes.
A couple of months later I received a call from Ray wanting to know if I would cook, at the last minute, for a small dinner that he was having for another friend of his—a certain Sylvester Stallone. I took a big gulp and graciously declined the offer. I am ashamed to admit it, but I adhered to the age old proverb: If you can't stand the heat, get out of the kitchen (at least when Hollywood royalty is involved.)

You can use fresh fruit in this recipe, but I have been able to discern very little difference in the finished product substituting frozen berries. So my rule of thumb is to use what ever is the highest quality for the least expense. Make sure to bake the crisp long enough, since the berries need to thicken from the cooking and not a thickener like flour or tapioca, and the topping needs to brown and be crunchy.

1. Arrange two oven racks so one sits in the lower third of the oven and the other in the upper third. Place a cookie sheet on the top rack. Preheat oven to 325°F. Grease 12"x17"x3" baking dish.

2. Mix together flour, brown sugar, melted butter, oats and cinnamon. Lightly sprinkle some of mixture in bottom of baking dish, so that the bottom of the dish is just barely covered. Do not press down.

4. Top the fruit with remaining crumb mixture. Do not press is down. Keep layering it on until all of the topping used and is mounded up thickly. It will settle during baking. Bake for about 90 minutes, or until the top is puffed and cracked and juices are thick and bubbly.

6. Rewarm portioned leftovers in a microwave for 30 seconds or bake in oven at 350°F until fragrant, about 10-15 minutes. Leftovers also freeze well. 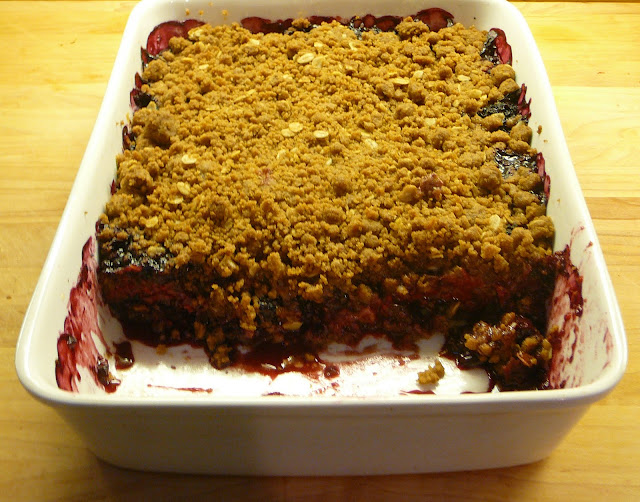