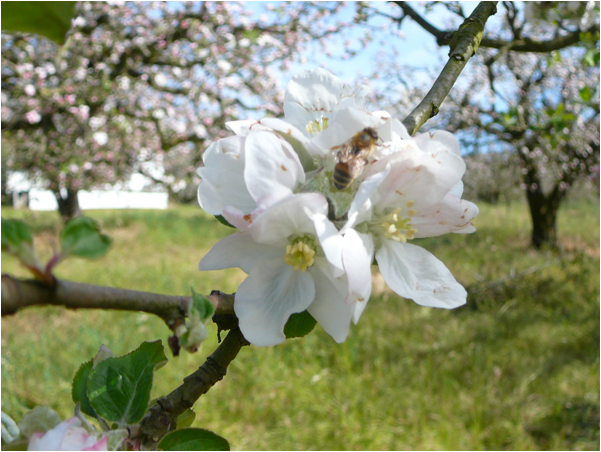 Sebastopol, California is a farming community in west Sonoma County that is associated with acres and acres of rolling hills planted with grapes. Although before the wine boom, the region was primarily known for growing Plums and Gravestein Apples. Unfortunately the apple industry in the 21st century struggles to compete with other apple growing regions and imports from other countries, notably China.
Thankfully, not all the apple trees have been replaced by grapes. There are still farmers who tend their orchards. The trees are planted in orderly designs that from a distance look like kaleidoscopes with wooden clapboard farmhouses placed at the center. It is easy to spot the abandoned orchards, weeds left untilled between the trees, their beauty not dimished by disheveled appearances. 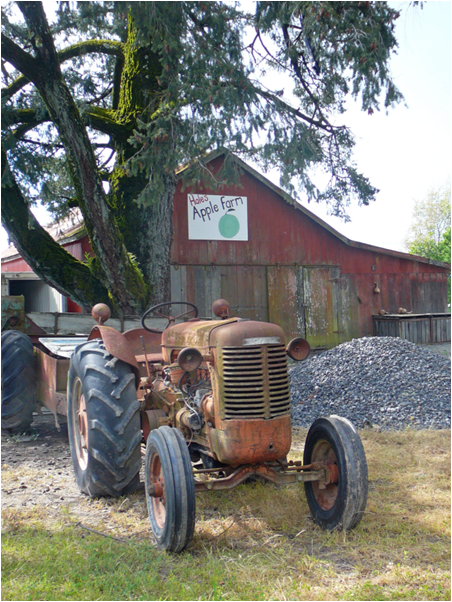 Driving daily by the beautiful orchards in varying stages of bloom prompted an undeniable hankering for apple crostata. Not really a proponent of unrequited love, I decided to buy some of those imported apples at the grocery store and make apple crostata right away. I will definitely make crostata again in the fall with in-season, farm stand apples. This crostata typically graces the dessert buffet for Halloween and gives competition to the more substantial apple pie for Thanksgiving.
Many years ago, my sister Juliette began collecting vintage pie plates by Jeannette Royal. She buys the heavy ceramic deep dish pie plates inexpensively at thrift stores for about two dollars. The plates, with fruit pie recipes printed on the bottom, are considered collectable and sellers on e-bay list the plates in the $25 range.
It was not long before Juliette began supplying me with the versatile bake ware. I probably have six in my cupboard along with various shapes and sizes of Pyrex. I don't hesitate to use the Jeannette Royal to bake and transport desserts to parties instead of using disposable and flimsy aluminum trays. Likewise, the plates are also great as a gift with something special baked inside, a la Martha Stewart.


I was inspired to make this recipe upon reading in Ina Garten's cookbook, The Barefoot Contessa Parties!, that apple crostata is her "absolute, all-time favorite dessert." I have adjusted her recipe slightly over the years to incorporate a few of Linda's baking tips. I also started baking the crostata in a pie plate because I find it easier to bake, display and, if needed, transport to a friend's house.
The crostata always garners rave review much to my delight. Not limited to just a dessert item (served with ice cream or vanilla spiked whipped cream), the crostata is also wonderful served as part of a breakfast buffet, or packed in my daughter's lunch for a midday snack.

Procedure:
1. For the pastry: In a large glass measuring cup, add a handful or two of ice, and fill with water. Place 1/2 cup and tablespoon measurers within easy reach, or directly in the bowl along with the ice. Set aside.

2. In the bowl of a food processor fitted with a steel blade, combine the flour and sugar and pulse a few times to mix. With a sharp chef's knife, quickly cut the butter - each stick into 8 pieces - and add to the flour and sugar. Pulse about 15 times until the butter is the size of peas. With the motor running, quickly add 1/2 cup water through the feed tube. Add another 1 or 2 tablespoons, if necessary, through the feed tube, pulsing the dough with the blade until the dough just comes together.

3. Turn the dough out onto a well-floured board. Divide the dough evenly into two pieces. Flatten each piece of dough into a disk. Wrap each disk in plastic and refrigerate for at least one hour or up to four days depending upon your schedule. Alternatively, If you would like to freeze one of the disks for future use, wrap foil over the plastic wrap for added protection. Using a permanent marker, label the package and pop it in the freezer. It will keep well for a month or two. Simply defrost in the refrigerator overnight before proceeding with the recipe.

4. For the streusel: In the bowl of a food processor fitted with a steel blade, combine the flour, sugar, salt, cinnamon, and allspice. Pulse to mix. Cut the butter into 8 pieces and add to the bowl. Pulse until the mixture is crumbly. Pour into a bowl and rub it with your fingers until the butter begins to warm and the mixture starts to hold together. If you are using walnuts, pulse in the food processor until finely chopped. Add to streusel mix, and stir together. Set aside.
5. To preheat the oven: Arrange two oven racks so one sits in the lower third of the oven and the other in the upper third. Place a cookie sheet on the top rack. Preheat oven to 400°F.
6. For one crostata filling (double the ingredients if making 2): Peel, core and quarter each apple. Cut each quarter in half and then into 3 chunks. Mix the 1 tablespoon of sugar and 1/4 teaspoon of cinnamon together. Add to prepared apples and toss. Add the orange zest and toss again.

7. On a flat and floured surface, roll the pastry into a circle, between 1/8"-1/4" thick. Transfer it to a pie dish with the edges overhanging the sides. Working quickly so the pastry doesn't become too warm, add the apples - spreading with your fingers and slightly mounding in the middle - then cover with the streusel. Gently fold the border over the apples, pleating to make a circle. Don't fuss over it, crostatas are meant to have a rustic appearance.
8. Quickly brush the pastry with a little milk to aid with the browning in the oven. Place the crostata in the oven on the bottom rack, shielded by the cookie sheet on the rack above. We usually put the crostata on a cookie sheet as well, to make it easier to remove from the oven. Turn the heat down to 350°F and bake for 50-60 minutes, rotating the cookie sheet once after 30 minutes. Cool on a rack. Serve with ice cream, preferably homemade, or vanilla spiked whipped cream. Servings: 8-10 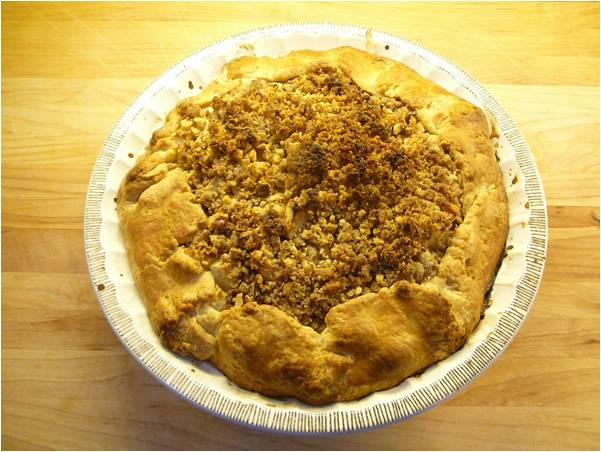