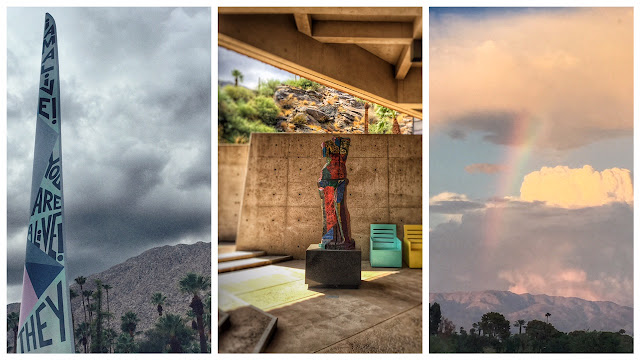 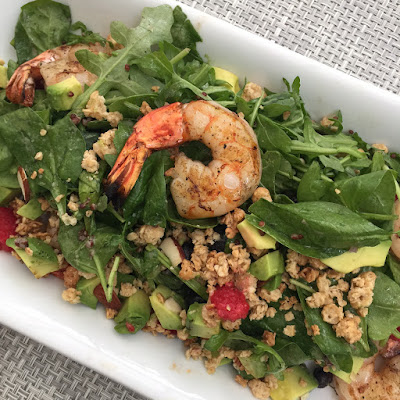 
The festive Purple Palm restaurant located within the inner courtyard of the Colony Palms Hotel serves this refreshing salad and a complimentary view of the rectangular pool that is surrounded by an interesting variety of frolicking sun worshipers in various stages of undress.
Our waiter, Michael recommended this salad topped with shrimp. He said what normally puts people off is the sound of the pomegranate yogurt dressing, but I can assure you it is quite delicious and the crunchy granola topping is such a good idea that I don't know why I haven't thought of it myself while garnishing salads in my home kitchen. It pays to get out of the house! Of course you can add any protein that you like to the salad. Michael recommended grilled shrimp, so that's what I ordered. A girl needs to be able to take advice. Just say yes! Yes is my new mantra.
I didn't want to recreate the wheel on the dressing. A quick Google search yielded a recipe from the cooking blog Homemade and Yummy. I changed the recipe ever so slightly to use regular balsamic instead of flavored. To my delight, I discovered that this recipe tastes just like the restaurant's dressing. I couldn't be more pleased. If you are wondering what to do with the leftover pomegranate juice, I am confident that my sister Linda would have recommended starting the party by making cocktails, such as her Layered Cosmopolitan or Hard Strawberry Lemonade.

Suggested Toppings:
mixed berries such as raspberries and blueberries; boysenberries and strawberries would also be tasty
pomegranate seeds, if in season
diced avocado
rinsed and drained black beans
quinoa, cooked according to the package directions, then served chilled or at room temperature
your favorite granola
grilled or poached jumbo shrimp
Procedure:
1. Brine the shrimp, if  using.
2. Mix the dressing ingredients in a bowl and refrigerate until needed.
3. Wash and dry the greens. Refrigerate until needed.
4. Remove the shrimp from the brine and cook your preferred way: grill, pan-fry, boil and shock, or sauté. To boil shrimp: Bring 8 quarts of water to a boil. Near the stove, prepare a large bowl of ice water. Drain the shrimp and discard the brine. Add half the shrimp to the boiling water and stir frequently. The shrimp will cook quickly so keep an eye on them. As soon as the shrimp begin to curl and turn pink, about 1 minute, the little guys are done. Quickly transfer the shrimp, using a large mesh spoon, to the ice water bath. Let the shrimp cool 2 to 3 minutes and then transfer to a large container with a lid. When the water returns to a boil again, repeat the process with the remaining uncooked shrimp. Once the shrimp are cool, remove from water bath. Eat right away or chill. The cooked shrimp will keep one to two days stored properly in a tightly sealed bowl in the refrigerator.
5. Toss the greens with enough dressing to lightly coat. Divide the dressed greens between plates and garnish each salad with the add-ins. Serve immediately with additional dressing on the side, if desired.


Posted by Salvation Sisters at 12:04 PM