"It was an ironic engagement gift. Yes, we both read it. And would both suggest a retitle: The Total Fundamentalist Crapfest." — from a book review of "The Total Woman" by Beth


It is shocking for me to remember from this present vantage point in 2014, that Marabel Morgan, author of The Total Woman published in 1973 wrote the bestselling nonfiction book of 1974. In that year Marabel sold more than 10 million copies of her anti-feminist and bible thumping manifesto that claimed to reveal the secrets to saving a woman's marriage by learning how to submit to her husband and making his happiness the focus of her existence. Marabel's suggestion that a wife greet her husband at the door encircled only in plastic wrap while proffering a martini became an instant classic and created much derision and eye-rolling from all the women that I know. I always wondered what wife who has worked a long day and has kids waiting for dinner could pull this off, and just why should I bring up this dated and dreary chapter in our history anyway, you might ask? Moreover—what does any of this have to do with rice pudding?

Because of the success of her first book, Marabel became a regular guest on The Phil Donahue Show, was featured on the cover of Time Magazine, and was named one of the most influential women in America by People magazine and the 1975 World Almanac. Once she became famous, Marabel went on to write subsequent books—one of which was a cookbook that she published in 1981. For some reason, our grandmother Maxine purchased the hardback copy for herself (I think she saw Marabel on a talk show) and then later gave the paperback copy to me. (It is now out of print, and somehow Michelle—aka The Repository—has ended up with both copies.)

I was on the hunt for good recipes in those days because I was catering, cooking at at a bed and breakfast inn, and still later working as a pastry chef in a local hotel. I remember laughing derisively when Nana presented the book to me. In spite of my skepticism that there could be any recipes of value in the book, I went ahead and made a couple of things that I thought looked good. To my amazement, everything I tried was better than good—her recipes were great. Color me surprised! To be sure, there are some real dogs in that book that I never even tried, but more than 30 years later, Marabel's rice pudding recipe and another for carrot cake are still my favorites of all time. I remember some years back the Cook's Illustrated claimed to have perfected carrot cake, so I tried their recipe. I am sorry to inform the recipe creators at that magazine, but Marabel's carrot cake kicks their proverbial cake ass. Their "improved" cake can't hold a candle to The Total Woman Lawn Fête Carrot Cake.

This is how Marabel's Creamy Rice Pudding went on to grace the buffet table at every single weekend brunch that I served at The Ballard Inn due to popular demand, and then it was frequently seen on the dessert tray at Remington's restaurant in the Los Olivos Grand Hotel when I was the pastry chef there in the early 90s. Guests at both establishments frequently commented that it was the best rice pudding that they had ever tasted and begged for the recipe—much like my beloved apple pie and chocolate chip cookies. Creamy Rice Pudding was always a favorite at our family gatherings, too. I remember making it for a Christmas morning brunch when our grandparents were still alive (it was one of our last big gatherings before death and divorce took their toll). Michelle's boyfriend at the time, Bob (the same one who loved Michelle's pasta salad) became an instant fan that Christmas Day long ago.

In all honesty, I haven't made this recipe in years because it is high in refined carbs and does have white sugar—things I am avoiding these days. But when I made it this week to feature in our retro-series on our blog, I did wonder if I would think it was as delicious as I remembered it to be. I am here to tell you that it is! When I served the rose and mint garnished dish of heaven to Mark who had never tried it before (no, I most certainly was not draped in Saran in case you might be wondering), he confirmed that without a doubt, it is the best rice pudding he has ever had. Adding citrus peels, coriander and gelatin to the custard—letting it cool and then folding in the whipped cream at the last gives this classic dessert a makeover that just might turn this into one of your favorites of all time, too.

P.S. We invite you to "like" us and to join the conversation on our Salvation Sisters Facebook Page where we post what we find and like from around the wide, wide, world of the internet. As always, we'd love to hear from you, whether you post in comments here on the blog or on Facebook. Ciao! 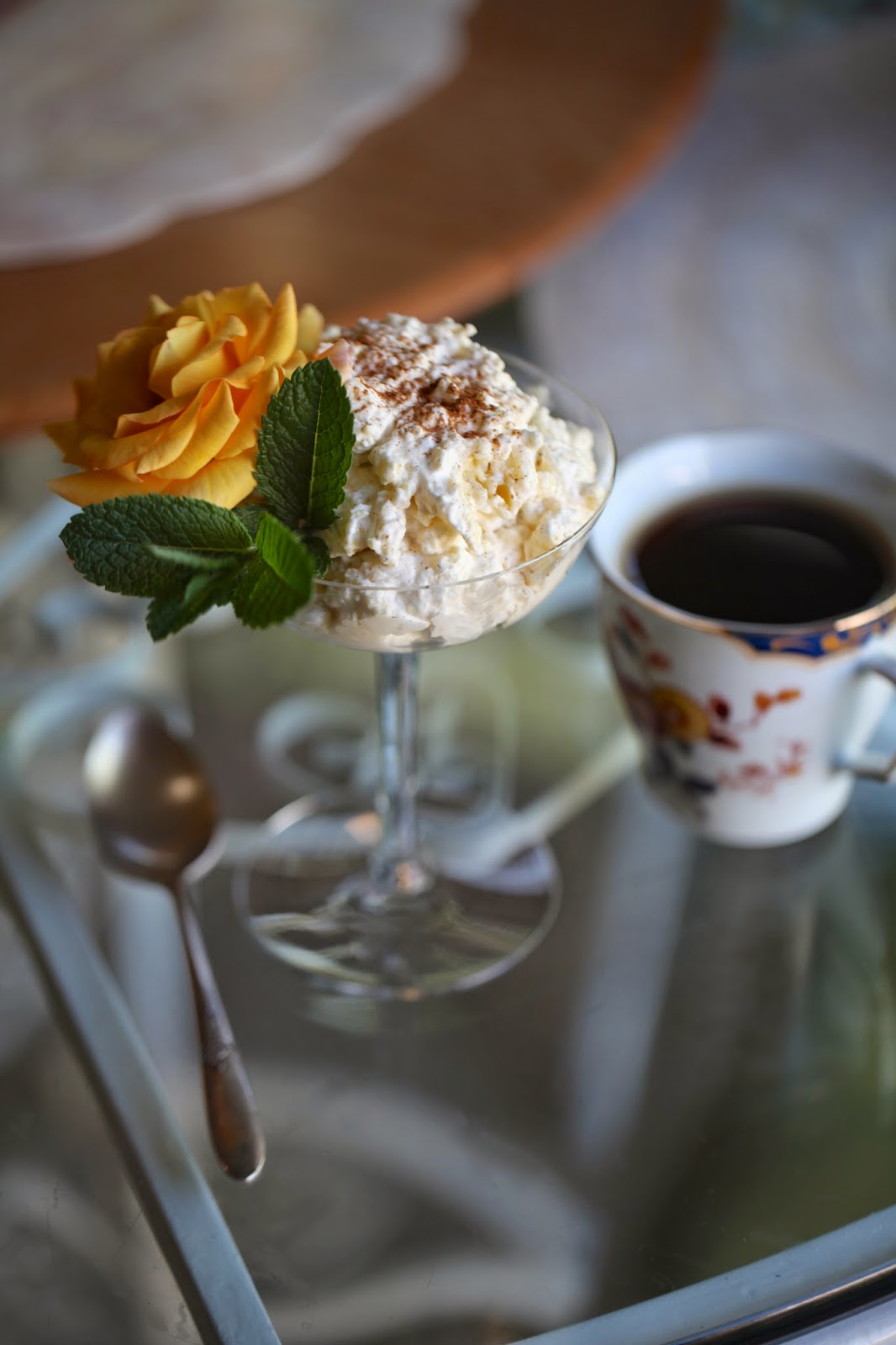 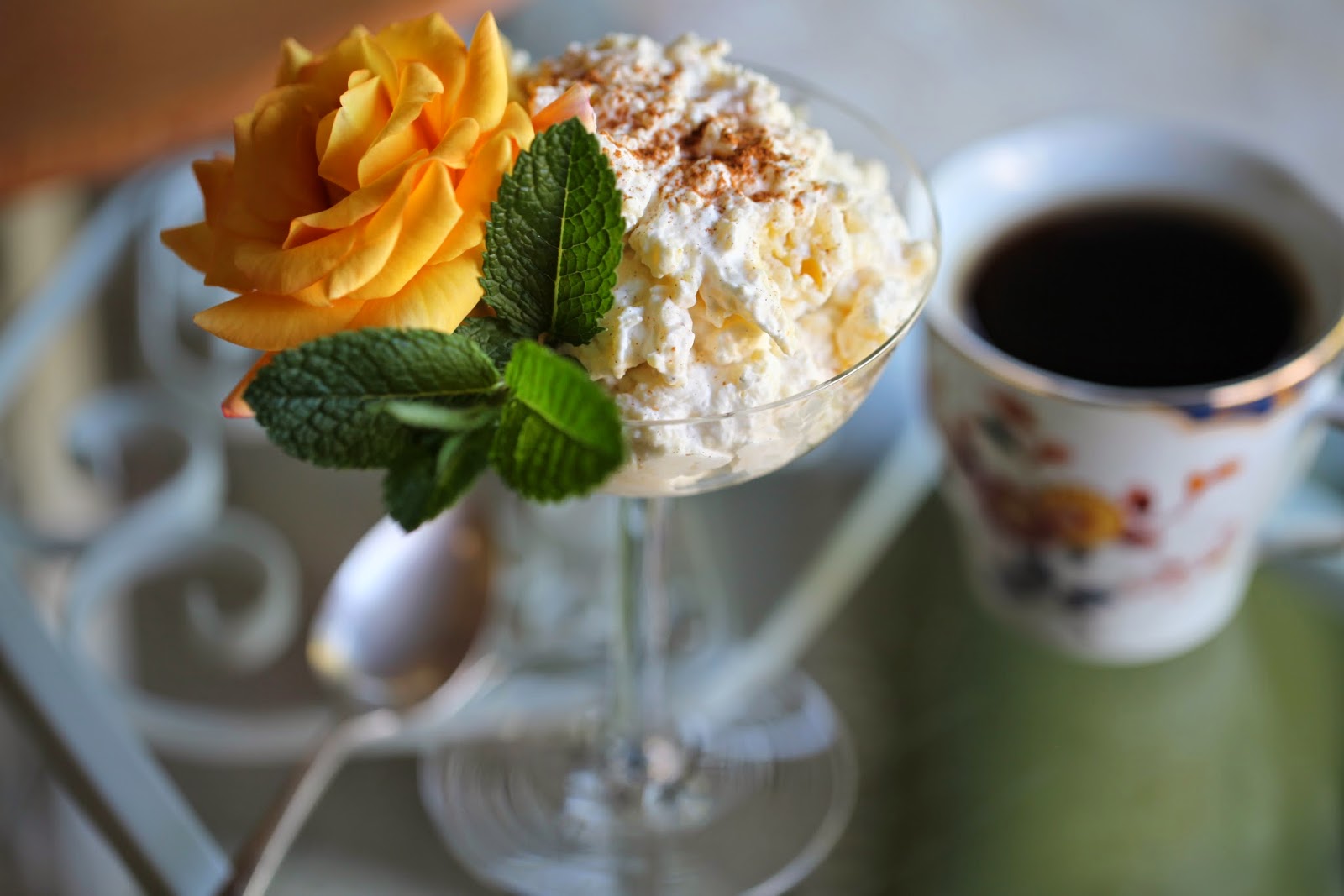 You can scoop the mixture in to individual glasses, place in a mold, or simply chill in a glass bowl for a casual gathering. This recipe can easily be doubled. The easiest way to prepare the rice is in an indispensable rice cooker. And yes, this is an excellent way to make use of leftover rice. In these photos I am making a double recipe. 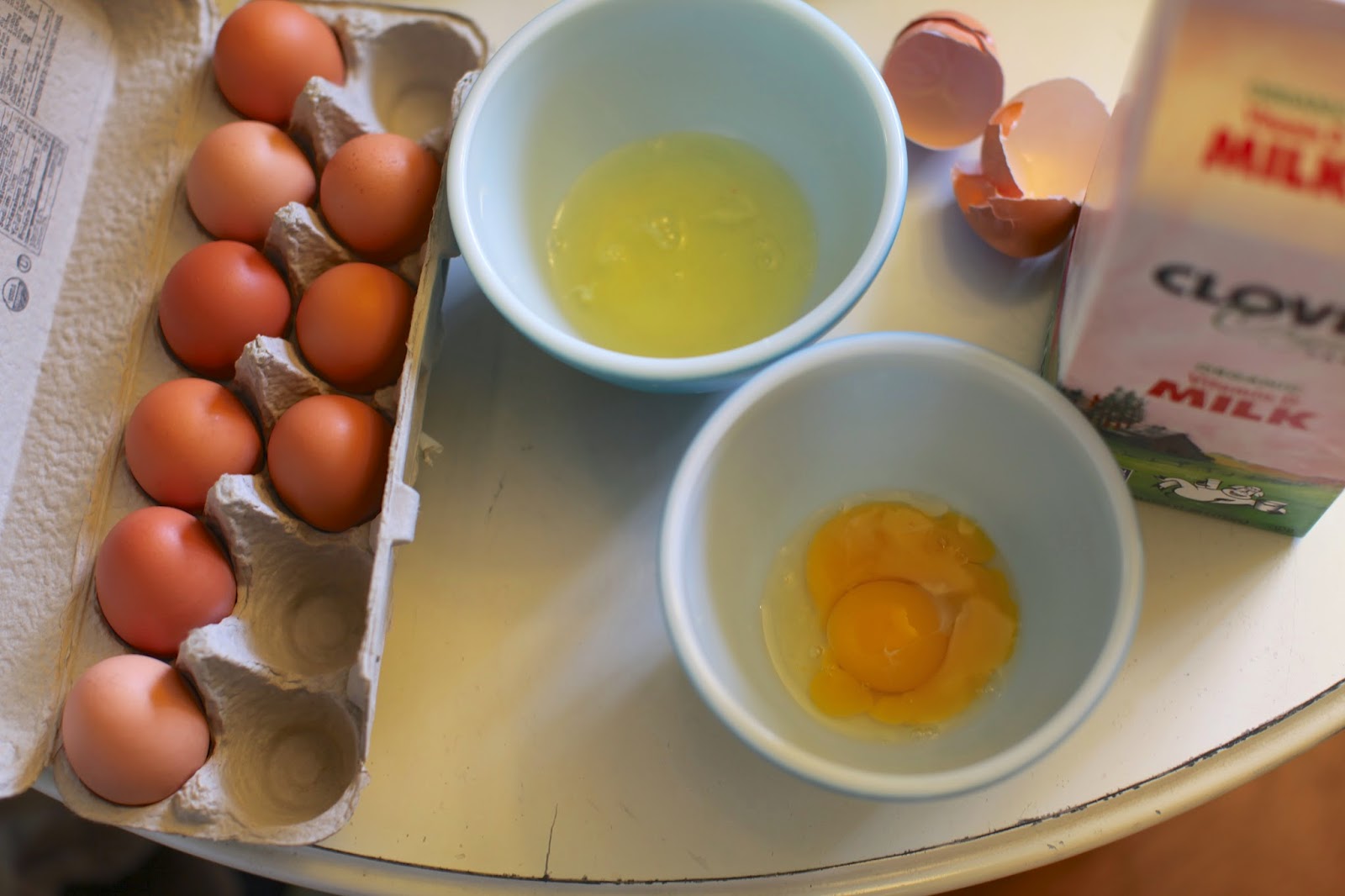 Procedure:
1. Mix cooked rice, 1/3 cup of milk and salt in small covered saucepan and simmer until rice absorbs the milk.
2. In heavy 1-quart saucepan, beat egg yolks and sugar until light. Beat in remaining 1-1/3 cups milk. Sprinkle gelatin evenly over egg mixture. Add cinnamon stick and cook over low heat, stirring constantly, until gelatin is completely dissolved and mixture thickens and coats a spoon, about 15 minutes. Do not boil. 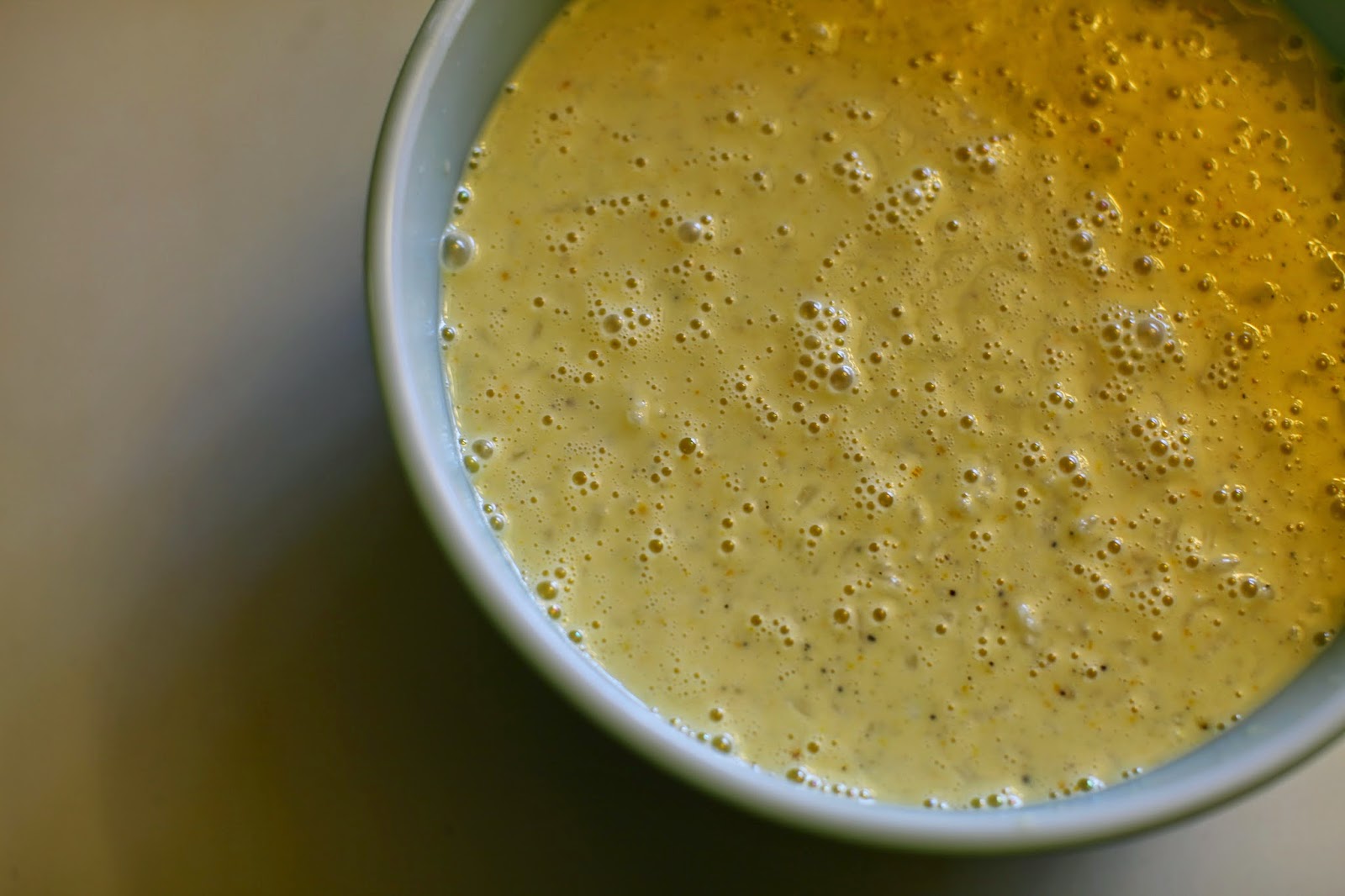 3. Combine the milk-plumped rice with egg mixture. Stir in orange and lemon peels, coriander, and vanilla extract. Cover the top with plastic wrap and press it directly on the surface. Refrigerate until chilled completely or overnight if using the next day. Remove cinnamon stick from the chilled mixture and discard when ready to add the whipped cream. My favorite way to whip cream is with an attachment that I purchased long ago that fits in my food processor. I don't know if Cuisinart still makes it, but I love mine! 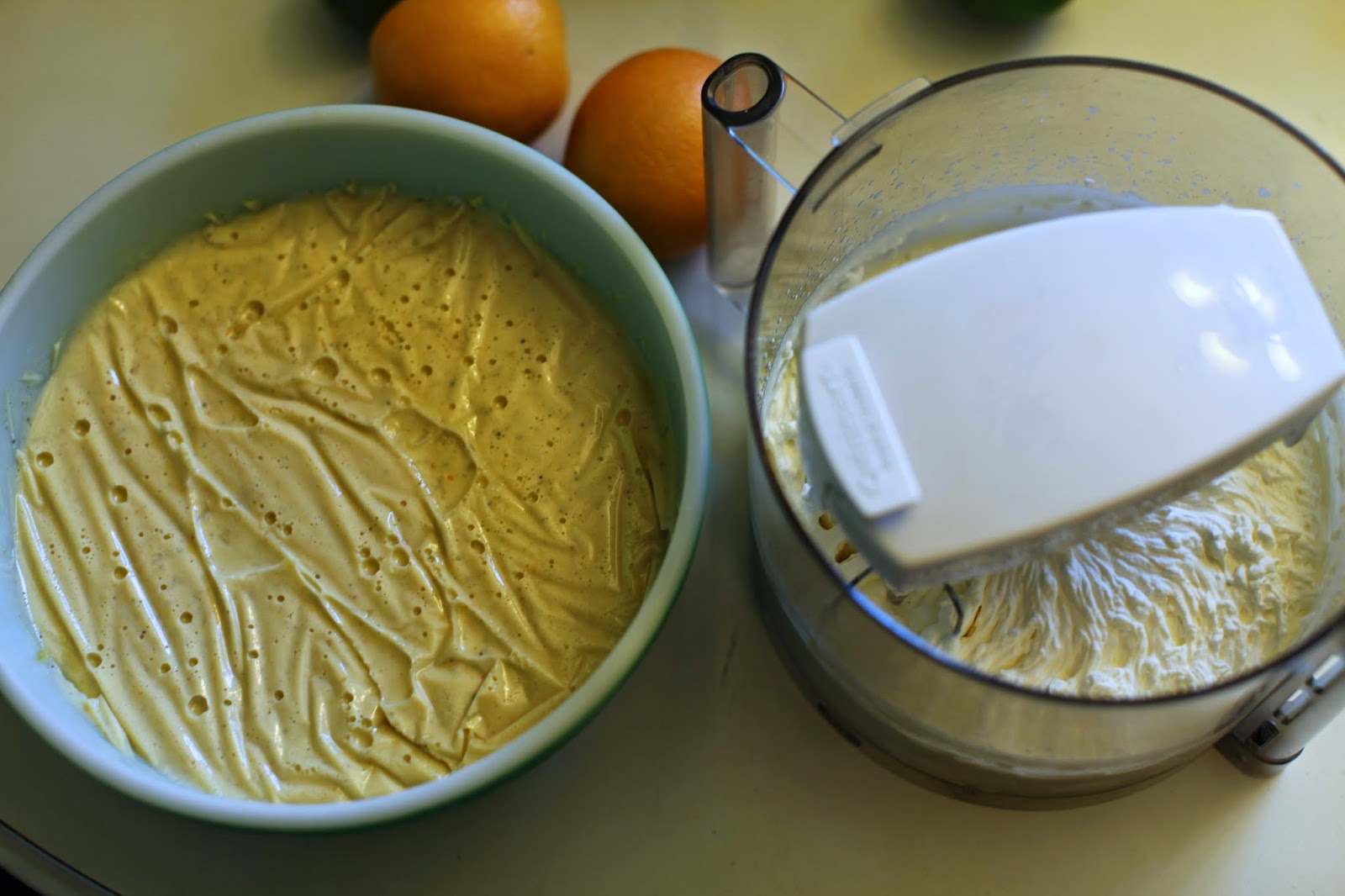 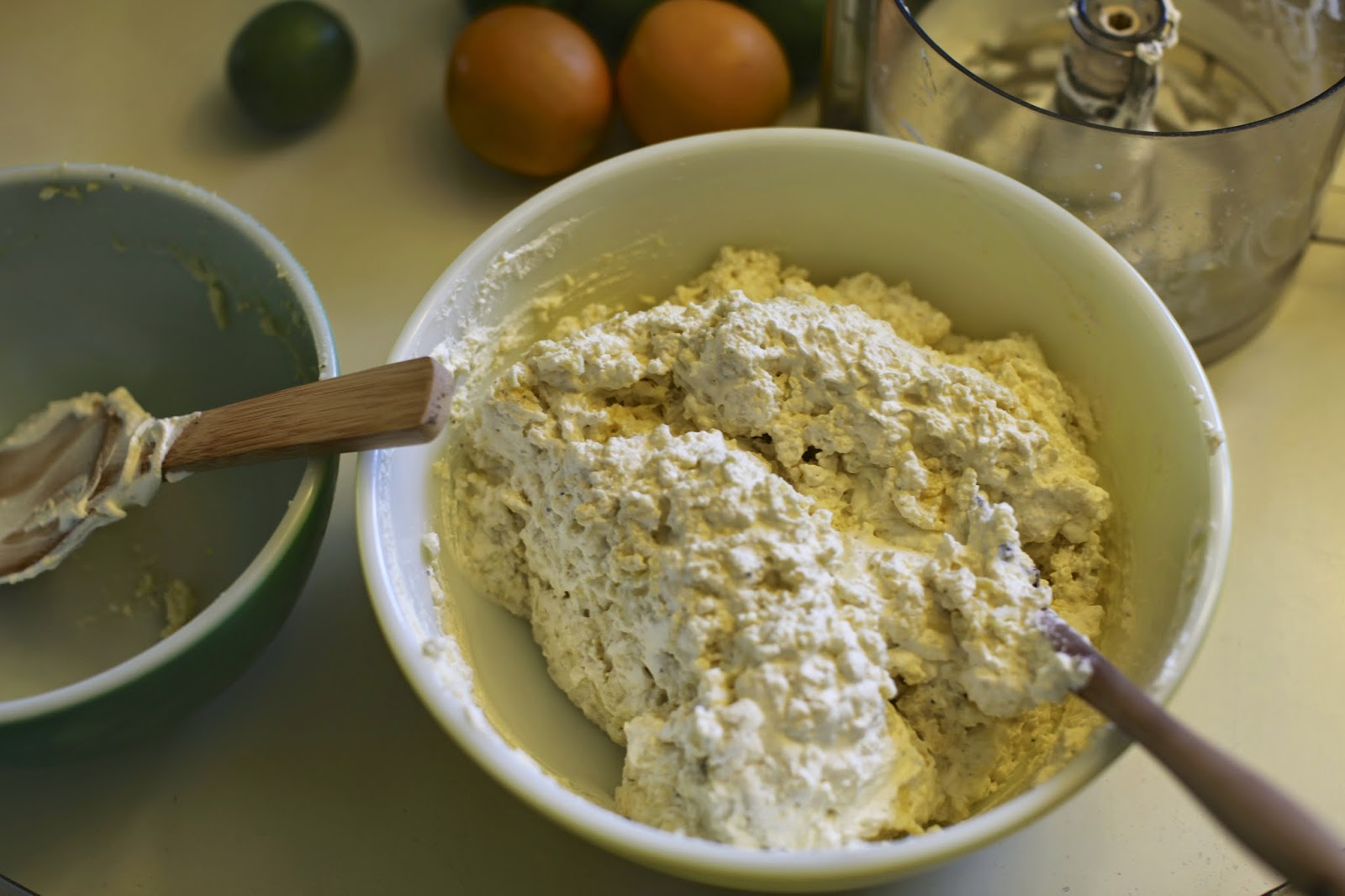 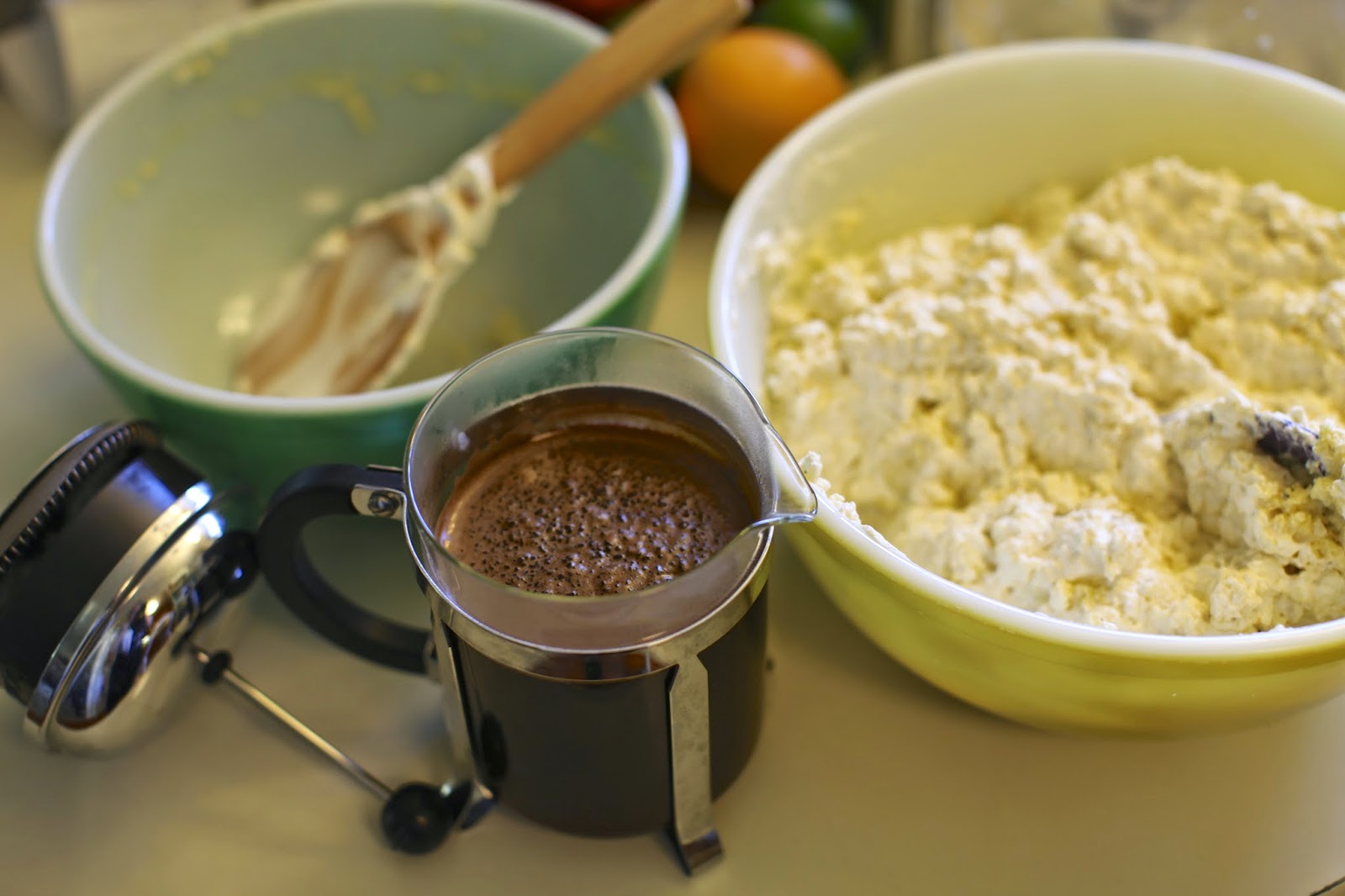 4. Beat heavy cream until thick. Fold into cooled rice mixture. Spoon into individual glasses, a serving bowl or a lightly oil sprayed 1-quart mold; cover and refrigerate for minimum of four hours or overnight. To serve, unmold on a cake plate, and garnish with orange sections, edible flowers and leaves if desired. Glasses make a beautiful individual presentation—garnish as desired with edible flowers, leaves or spices such as cinnamon or nutmeg. 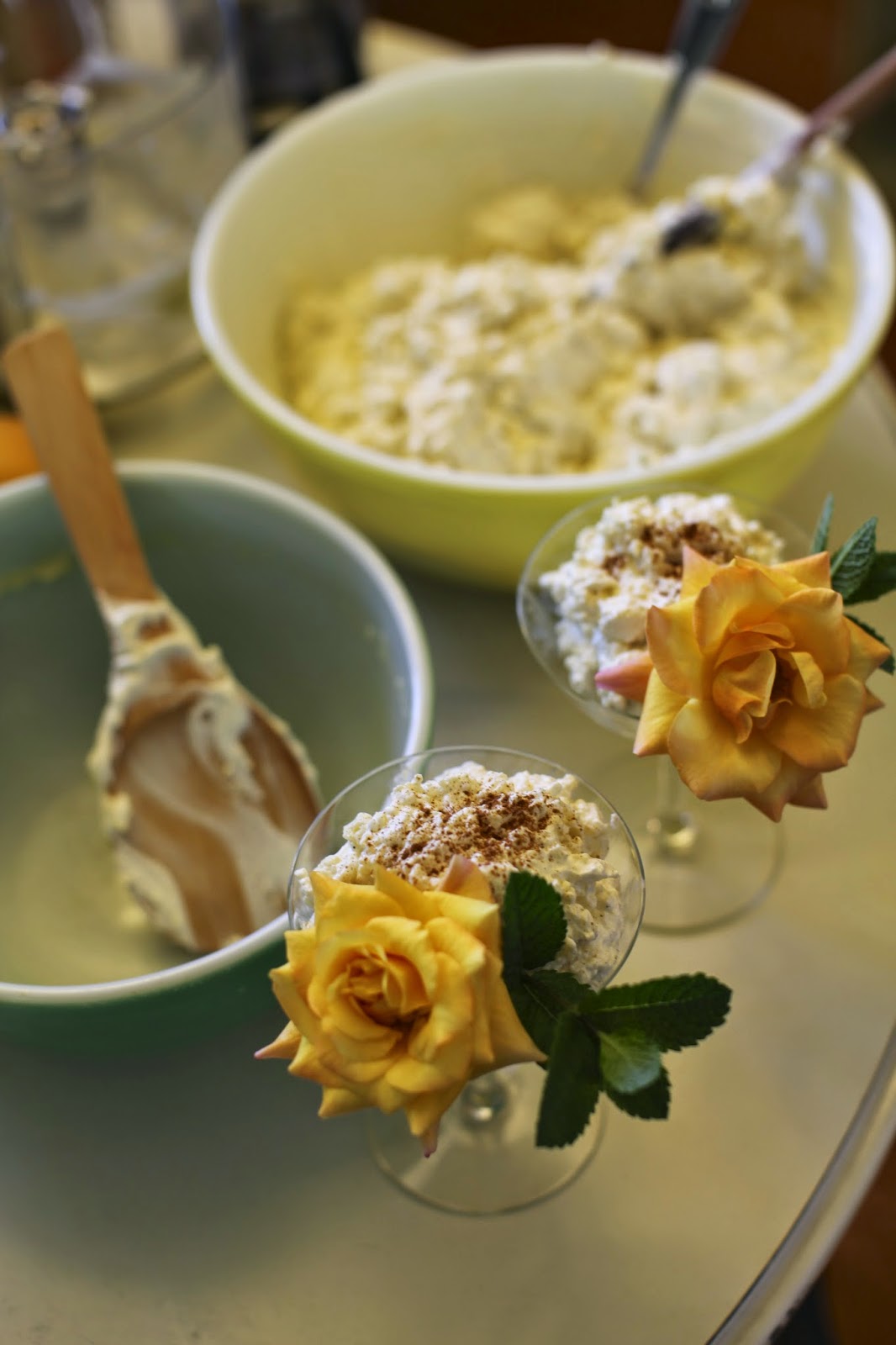 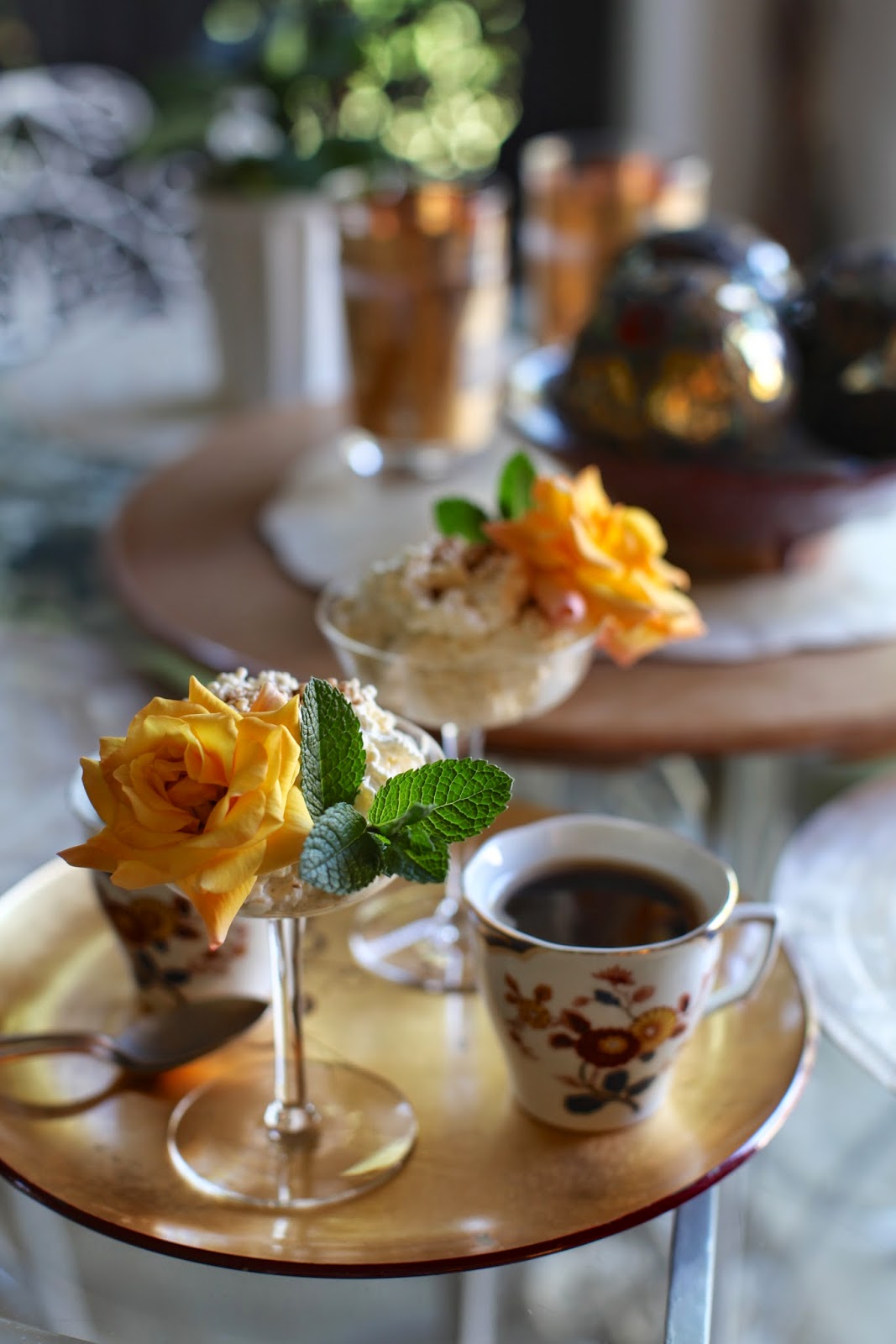 Posted by Salvation Sisters at 7:36 AM