"Money can't buy happiness. But it can buy marshmallows, which is kinda the same thing."
~Unknown

I know it is January, the month when we are all supposed to be getting healthy, but I didn't want to wait until the next indulging season to encourage you to cook and bake with someone you love. In this particular scenario it is quality time in the kitchen with my nieces, Bea and Isi from the Greater Washington DC area and my daughter, Maddie. If you frequent our sisters' blog, you know that Maddie and I enjoy spending time in the kitchen together, in particular, making sweets. Within the last year, Maddie has also began exploring the savory side of life, and often she will be on the opposite side of the counter from me dicing vegetables, demonstrating her good knife skills.

As I wrote last week, November and December were decidedly difficult months, culminating with the passing of my father-in-law. Carving out personal time to spend with the ones that I love helped to keep me grounded. Spending time with young ladies that exude youthful optimism, definitely helped alleviate some of the mental fatigue that I had been carrying around with me throughout the holidays. An afternoon of making a delicious confection with happy girls helped to brighten my outlook on life and to remember that there will be plenty of good times ahead. Without the bad times, we wouldn't recognize the good times. 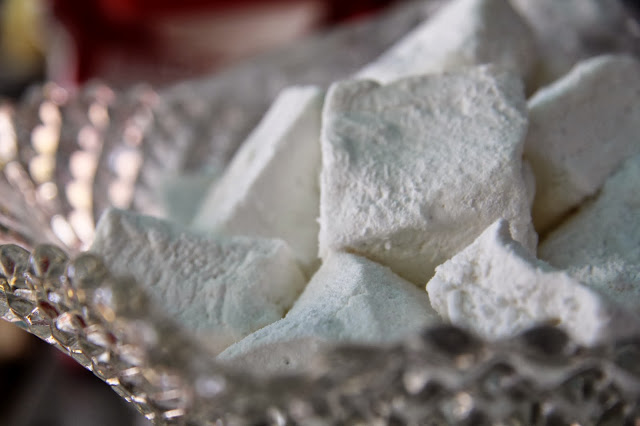 
This recipe is from Chocolate Obsession by Michael Recchiuti and Fran Cage. For those of you who live in the Bay Area, you may recognize the name Recchiuti because Michael's chocolate shoppes have been part of the San Francisco food scene since 1997. This particular cookbook intrigued Linda because Recchiuti often brilliantly uses fresh herbs to flavor his chocolate confections.
Unless you have a bionic arm, and not in a metaphorical way, you will need a 5-quart heavy-duty mixer to whip the hot, thick mixture. Making marshmallows is typically a two-day process for me, but if you are an early riser, you can finish the recipe in one day. And, one last thing, egg whites are easier to separate when cold, and easier to whip when warm, so let the egg whites reach room temperature before proceeding with the recipe.

1. Line the bottom of the sheet pan with parchment paper and lightly coat the paper and the pan sides with flavorless vegetable oil.
2. Put the gelatin in a small bow. Add the water and stir. Set aside to soften. If the mixture seizes, add a little more water and stir thoroughly until the gelatin is soft.

3. Combine 1 cup (7 ounces) of the sugar with the corn syrup in the 4-quart, heavy bottomed sauce pan. Place over medium heat and cook, stirring occasionally with a wooden spoon, until the sugar melts. Then continue to cook, without stirring, until the mixture reaches 240°F on a candy thermometer. If any crystals form on the sides of the pan as the mixture heats, wash them down with a wet pastry bush.

﻿
4. Meanwhile, put the egg whites in the bowl of a stand mixer fitted with the whip attachment. Scrape the seeds from the vanilla bean into the bowl.
5. When the sugar syrup reaches 240°F. Start to beat the egg whites on medium speed. When the whites form very soft peaks, add the remaining 1 cup (7 ounces) sugar and continue beating.
6. When the sugar syrup reaches 250°F, remove it from the heat and stir in the softened gelatin. The syrup will foam up and triple in volume.

7. Switch the mixer to high speed and slowly pour the syrup into the beaten egg whites, aiming for the side of the bowl. The whites will almost double in volume. Reduce the speed to medium-high and beat until the whites (not the outside of the bowl) are lukewarm to the touch, about 114°F, about 15 minutes.
8. Scrape the marshmallow mixture into the prepared pan and, using a small offset spatula, spread it evenly to the sides. Let cool completely uncovered at room temperature. 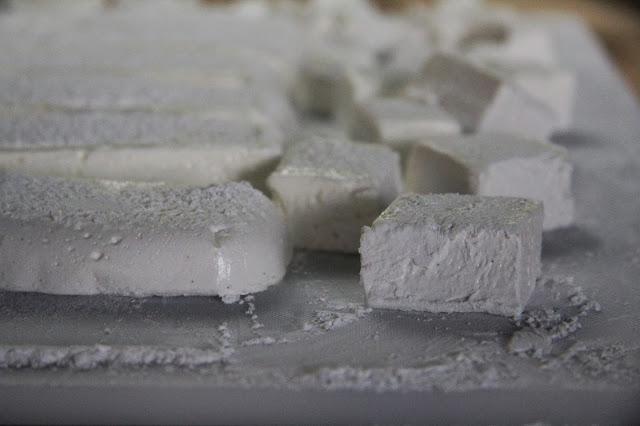 9. To cut the marshmallows, sift about 1/2 cup of the powdered sugar onto a work surface in a rectangle the size of the sheet pan. Sift another 2 ups powdered sugar into a large bowl. Run a thin-bladed knife around the edge of the pan to loosen the marshmallow. Carefully invert the pan onto the sugared surface to unmold, then lift off the pan and peel off and discard the parchment paper.
10. Sift about 1/2 cup powdered sugar evenly over the top. Using a ruler to guide you (I didn't, I just eye-balled it), and a lightly oiled sharp knife, cut the marshmallow slab into 1-1/2 inch rows. Powder the sides of the cut rows with the powdered sugar on the board. If needed, clean the knife and oil again before continuing to cut each row into individual, symmetrical squares. You may find that it is easier to use a pressing motion to cut, rather than pulling the knife. After cutting, toss the marshmallows, a few at a time, in the bowl of powdered sugar, coating them lightly. 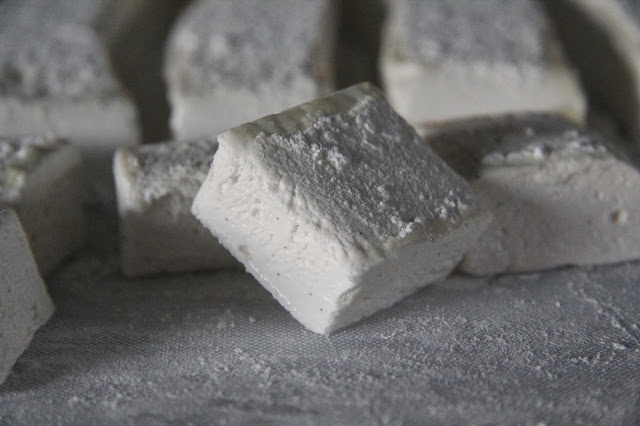 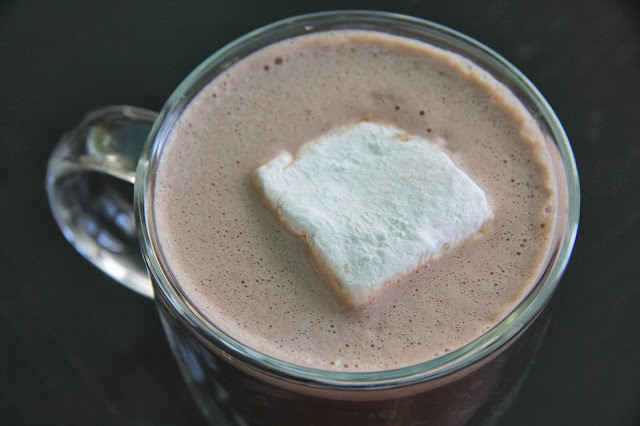 Posted by Salvation Sisters at 8:33 AM