"As I ate the oysters with their strong taste of the sea and their faint metallic taste that the cold white wine washed away, leaving only the sea taste and the succulent texture, and as I drank their cold liquid from each shell and washed it down with the crisp taste of the wine, I lost the empty feeling and began to be happy and to make plans."
~ Ernest Hemingway, from a Moveable Feast 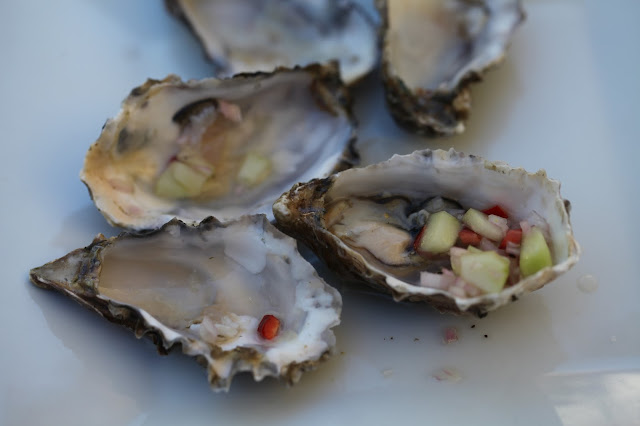 The summer before last, I moved an hour south from my home of Guerneville, California, to the city of Petaluma. As much as I loved the beautiful environs that frame the funky town of Guerneville, with the move to Petaluma I left the isolation and damp of the river town for the many amenities that one can find living in a small city. One such benefit, is being able to be at the Hog Island Oyster Farm in Marshall, by way of a short and scenic thirty minute drive. If you are planning a visit to California's famous Bay Area, Tomales Bay is well worth making the effort to visit.

This past year, my son Jordan and I took a trip out to Marshall on the day after Christmas. Off we went on a dazzlingly bright winter's day in his very tall truck (yes... the one that I have such a difficult time climbing into) in search of oysters. Jordan was raised in close proximity to the ocean, and now that he lives in a mountain town far from the water, he was looking forward to spending some time on the coast. 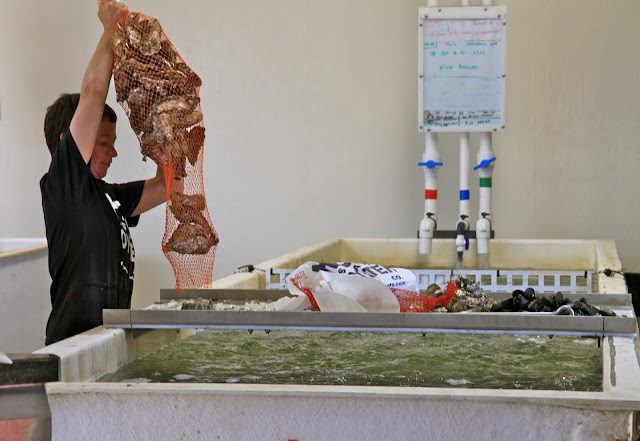 Oyster farming is the main industry on the bay (although the Giacomini family makes amazing cheese just up the road at the Point Reyes Farmstead Cheese Company), and the oysters that grow here have the benefit of maturing to harvesting size in the clear, clean and cold waters of Northern California. Hog Island's Farm has a seating area with a view of the bay, and with the purchase of oysters, they will provide you with a shucking knife and the other accoutrements that you will need to have for the perfect seaside feast. Reservations are required. 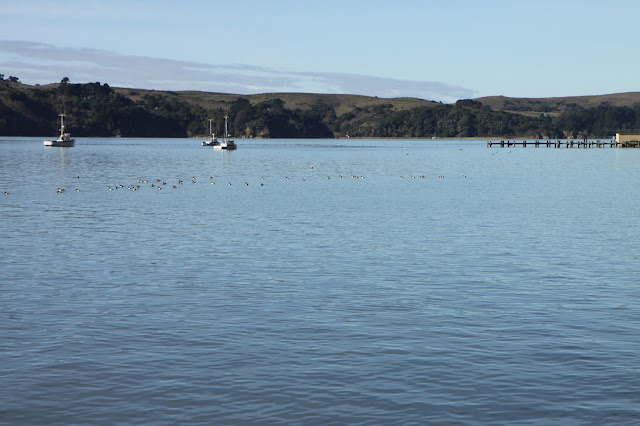 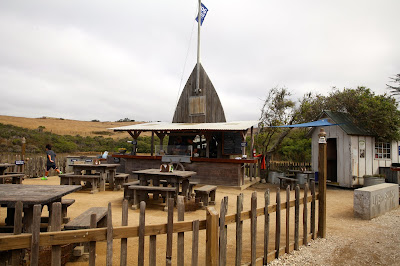 In recent years Hog Island has built an oyster shack which they call The Boat, where one can purchase oysters, barbequed oysters, cheese and the like. You can now order drinks and let the guys or gals behind the counter do the shucking or grilling while you sip on a cold beverage. 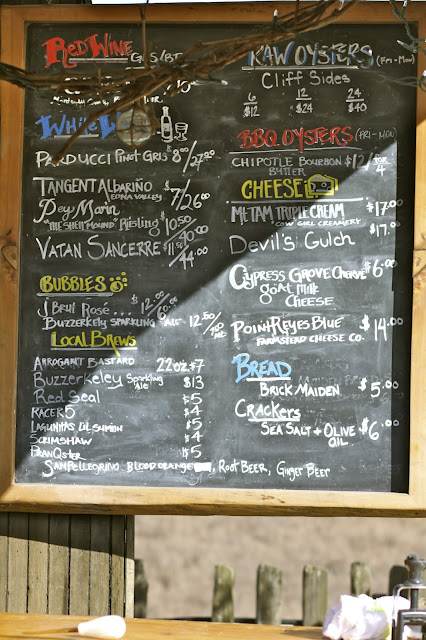 Jordan and I picked up our oysters, and stowed them away in an ice chest to take home. We then headed for Nick's Cove on Highway 1 in Marshall to have some lunch. Nick's is a very short distance from Hog Island Oyster Farm, and it is such a scenic place to have lunch or dinner, that it makes it easy to overlook the sometimes uneven service and pricey food. Let's face it... you are paying for that spectacular and tranquil view, also. Nick's does have a nice selection of local wines, and Jordan and I tried out a tasty Sauvignon Blanc from Jus Soli, which we both thought paired well with our fried calamari and Dungeness crab salads.


1. Mark's Mignonette for Oysters on the Half Shell
2. How to Shuck an Oyster 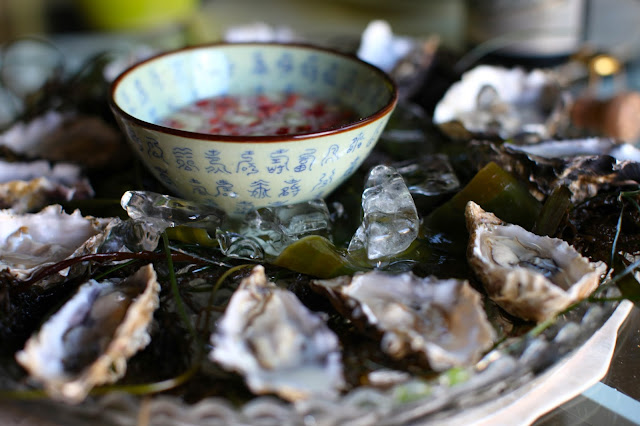 Mark loves to play with food and create new dishes. He also really, really loves oysters, and he makes a darn good mignonette sauce to go along with them. After some experimentation, he has settled on a base recipe with which you can make variations according to the season. At Christmas, Mark made the mignonette with fresh minced ginger and fresh grapefruit. I love his mignonettes because they are different than the usual fare served in restaurants.
When I got around to finishing this post, it was late summer. As Mark and I headed out to pick up oysters from Hog Island so that I could shoot the final photos for this post, I asked him about food styling choices, and he suggested that we collect fresh seaweed from the coast for the platter I had planned. This was an instant no brainer for me, I loved the idea. So after picking up the oysters at Hog Island and depositing them with a large quantity of ice in an ice chest, we headed for my favorite place of all... the beach.

In our search for fresh seaweed, I happened to find a tiny sea palm that I wanted to use on our oyster platter like a tiny palm tree. Mark didn't think this would be a very good idea. Turns out he was right on two counts. One:  I couldn't figure out a way to anchor it so that it would stand up. Two: Holding it up into position proved just how silly it would look if I ended up being successful in that endeavor.

If you have never shucked an oyster before, Mark is going to show you how in a detailed pictorial. But before you crack open your delicious morsels from the sea, prepare your mignonette sauce.
On the way home from the beach we found peak-of-the season Italian red peppers that beckoned to us at a produce farm stand, and with that prompting of fate, Mark decided to use those flaming beauties in the afternoon's mignonette. Those peppers, along with a cucumber that we already in the fridge, were the seasonal experimentation that should be celebrated with abandon. Using what is already in your pantry, and also what is in season makes sense and is delicious to boot. Vegetables and fruits that are picked and eaten in season are superior in every way.

Procedure for the Mignonette Sauce:

You will need an oyster knife and dry towels to open the oyster. Mark uses old flour sack towels to grip the oysters while he shucks them. Never try to open an oyster in your bare hand. The reasons for this seem abundantly obvious... it is dangerous! There are gloves that are made for this purpose as well that will protect your hands. So let's get started: 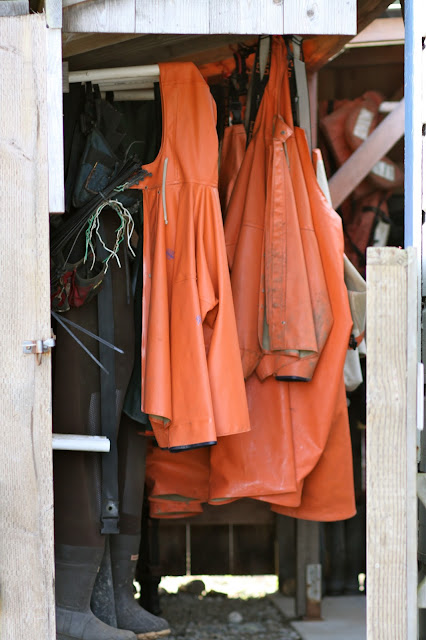 Posted by Salvation Sisters at 4:29 AM

Email ThisBlogThis!Share to TwitterShare to FacebookShare to Pinterest
Labels: My Traveling Tales by Linda, Sauces, Shellfish