"... most bereaved souls crave nourishment more tangible than prayers: they want a steak. What is more, they need a steak. Preferably they need it rare, grilled, heavily salted, for that way it is most easily digested, and most quickly turned into the glandular whip their tired adrenals cry for."
~M.F.K. Fisher 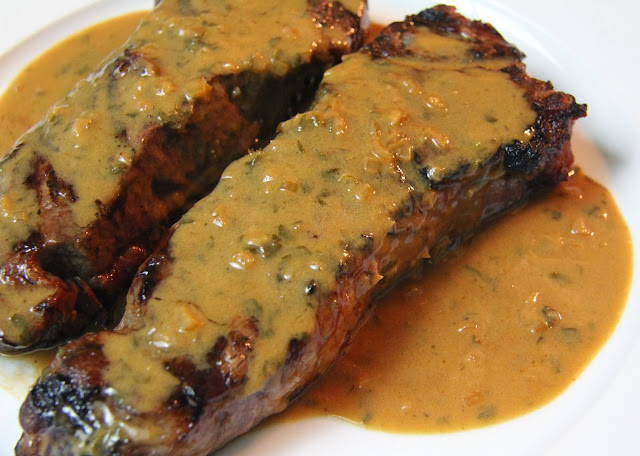 ﻿
Preparing demi-glacé at home is an all day affair. Most of the time I don't attempt the feat in one day, preferring to stretch the preparation over two days. It is not an unpleasant task for the kitchen adventurer, but a time commitment nonetheless. I prefer to make demi-glacé at my convenience and then store frozen cubes of the savory goodness in my freezer. The alternative is to purchase demi-glacé at a specialty market or retailer such as Williams-Sonoma. Either way, luxurious demi-glacé is the "secret" ingredient that makes this sauce so very special. To see my recipe and procedure click here.
My maternal grandfather, Earl loved this dish and would speak of Steak Diane with a certain reverence in his voice. I can picture him in my mind's eye on a cruise ship, seated at dinner sipping a Manhattan, while a tuxedoed waiter dramatically prepares the entrée tableside in a chafing-dish, blue cooking flames lapping the shallow skillet. I too love Steak Diane and prepare it frequently at home for special occasions. Whenever I do, I lovingly recall my grandfather, whom we sisters called Papa.

The traditional recipe is prepared with steaks that are suitable for flattening, such as strip, sirloin or club that are pounded with a mallet to 1/4-inch thick. The thin steaks are quickly seared in a skillet and the sauce is prepared while the steaks are resting. It's a classic supper club entrée - one that may have been enjoyed by Bogart and Bacall - that I've updated for the grill. The steaks we choose for this preparation have included both bone-in and boneless: New York, Filet Mignon, Chateaubriand, Flat Iron, just about any cut will do. Cook the steaks to your temperature preference on a gas or charcoal grill.
The unfussy sauce is easy to prepare on the stove and it will happily keep warm, without breaking, over low heat. (You can also make it up to a week in advance.) Therefore, you can make the sauce before the steaks are placed on the grill, so there is no second guessing over whether the steaks and sauce will be ready at the same time. Let the steaks rest for 10 minutes, loosely covered, before plating individual portions. Spoon the sauce over whole or sliced steaks and serve. Pass additional sauce at the table.

When I recently made Grilled Steak Diane as the grand finale dinner for Sistercation in Southern Arizona, there was also a collective cheer from our extended family when it was learned by all present that cheesy scalloped potatoes were on the menu. Since we were planning on spending the day at the Arizona-Sonoran Desert Museum, I made the potatoes a day ahead and refrigerated overnight. I let the prepared potatoes rest on the counter for about 30 minutes before I began reheating. In fact, I placed the potatoes in a cold oven and then turned on the heat. I am happy to report that the potatoes heated beautifully and the cheese sauce was silky. There was no harm at all from making the potatoes in advance and letting the hefty dish rest in the refrigerator. In fact, I think the flavor deepened. The steaks and the side dishes were ready in the 90 minutes it took for the potatoes to bubble and the bread crumb topping to crisp.

I've prepared this dish on many special occasions, including once for my own landmark 40th birthday party. At some point in time I created a chart in Excel to scale the ingredients. On average, you can calculate the amount you need by estimating two tablespoons of Diane Sauce per person and scaling appropriately.
If you are using frozen demi-glacé, you can defrost in the refrigerator overnight, or place the number of cubes needed in a small saucepan and defrost over a low flame until melted, stirring every so often. I am also happy to report that the sauce can be made in advance, cooled and stored in the refrigerator. Gently heat prepared sauce over low flame until hot. I have found that the sauce keeps well for up to a week in the refrigerator. 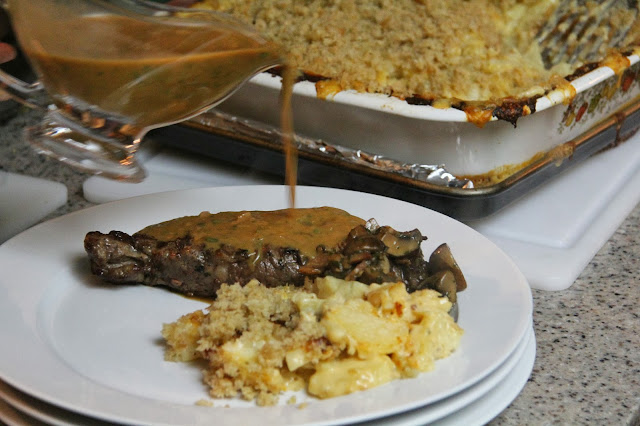 Procedure:
﻿
1.To make sauce: melt the smaller amount of butter in saucepan over medium heat. Add shallots and cook, stirring, until fragrant, about 2 minutes. Stir in mustard, Worcestershire sauce, and demi-glacé. Add Madeira, freshly squeezed lemon juice, and parsley. Heat, stirring frequently, over medium heat, until very hot.
3. Grill steaks, seasoned with salt and pepper, according to your preference. Let the steaks rest for 10 minutes, loosely covered with aluminum foil, before serving.
2. When the steaks are "resting", remove pan from heat and whisk in remaining butter, a couple of tablespoons at a time. Season to taste with salt and pepper. Drizzle sauce over steaks and serve. Pass additional sauce at the table in a gravy boat.

Posted by Salvation Sisters at 8:16 AM